“You left the door open and I walked in” 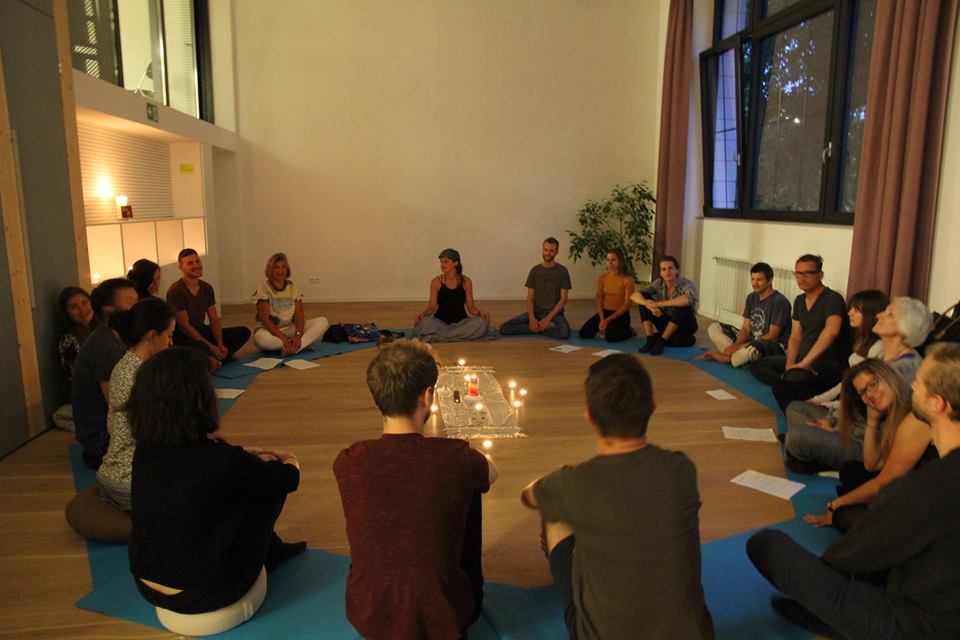 So many of us walked into that open door and found ourselves at home in the circle. “There is an immediate sense of trust and respect and everyone feels belonged.” From 3 people sitting in silence on a Wednesday evening in a home in Santa Clara, Awakin circles have organically spread to 100+ cities around the world and every week so many people come together to co-create the circle. One person at our circle recently shared, “It’s small and yet it is so big!”. I don’t think I can find the right words to describe the extraordinariness of the ordinary Awakin circles. Which is why we asked Awakin hosts from around the world to share their reflections of 2018. Below are some highlights from those reflections!


The journey of self

Reflecting on the 10th year anniversary of Awakin circles in London, Trishna wrote, “My simple intention was to hold space together with others who resonate with these values, trusting and knowing that this would nourish my own journey in a deep way.” And nurtured and nourished, they have.

As we open our doors to strangers and welcome them in, it is not just our homes but also our hearts that open up. Personally I’ve found a deeper connection to myself just by being present to the circle. The collective one hour of silence has also helped me keep up with my personal daily practice. Every Wednesday has been an opportunity to grow deeper in service. Nhi says it has led to widen and purify her heart as she welcomes strangers, confronts her own fears and insecurities, and puts her heart in preparing the space and cooking food.

But hosting Awakin circles in itself has been a skill to learn. As Joserra points out it takes a lot of observing, a lot of listening, a lot of being, and a lot of so many invisible things to be an effortless Awakin anchor. It seems simple and yet it is not. There is a constant effort behind it. It has also been a practice in letting go of any expectations and being open to sudden occurrences — who will come, how many will come, will there be enough food?

Beyond the hosts, so many committed anchors have stepped up in every location to ladder volunteers and also deepen the community connections. Currently Awakin readings are translated in 6 languages! The commitment of the translators (and Liz who does the audio recording of every reading) inspires and amazes me week after week. One of the members at our circle had once shared that while she understood the reading in English, it went to her heart when she heard it in Romanian. And a quote from one of the translators:

"Translating Neruda's wonderful poem was a breeze, but it took me longer to reflect on it. Deep...
Honestly, I'm not sure anymore what I like most about the Circles, the silence, your cooking, the intellectual depth or being exposed to such various intellectual exercises, new horizons and new ideas... Awakin Circles are making my Wednesday evenings worthwhile."


In Ahemdabad recently when it so happened that the Awakin circle might had to canceled for the first time in 10 years because all the regular hosts were traveling, a group of regular members stepped up to prepare, cook, and host the circle all by themselves! 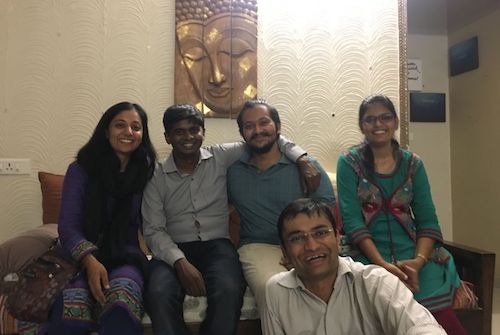 In Surat, Romania and other locations as well local volunteers have stepped in to ensure that the circles continue even when the regular hosts are not in town. In Paris, Caroline recently felt a deep sense of surrender to the process when she asked someone else to anchor for the first time.

A big highlight was how the circles over time have expanded to include families of many hosts — parents, spouses, siblings, and even children who were earlier unwilling or unaware of meditation have found a deep connection to the circles. Cristine’s son; my parents, Giang’s mother, Nhi’s family and another anchor’s daughter with Asperger’s Syndrome. Nhi shared a beautiful and intimate moment experienced by her 15 year old niece after the circle when she went and asked people for hugs!

I could not believe that my super shy niece could have such courage and confidence to look at a stranger straight in the eyes, asking for a hug. She then surprised me even more when asking two other friends to give her hugs while they were leaving the house. Big smile shown on her face for the rest of the evening. I could see the sunshine and the whole sky in her face…I neither asked my niece why such impossibles became possibles that evening nor questioned myself why such amazing story happened in Awakin Circle.”


In Surat they started a whole new Awakin circle just for the kids! 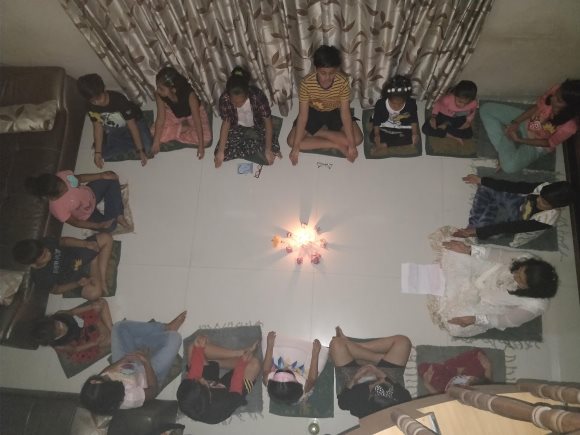 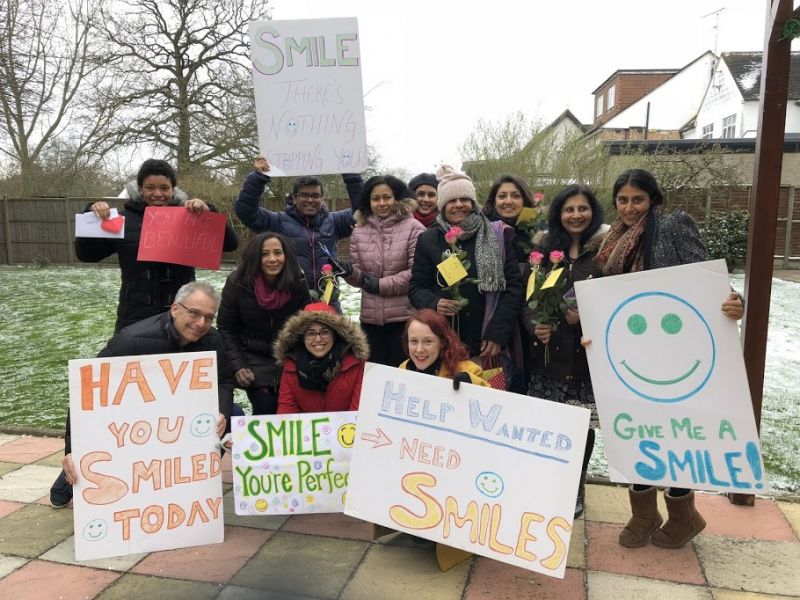 Without anyone saying, “this is the way things work!”; Awakin circles have inspired so many stories of kindness and generosity. People regularly bring gifts to the circle like food, material, notes of encouragement but in Burgos one person brought a home! In London, a lot has unfolded since the first Awakin circle in 2008 and a beautiful community has come together hosting retreats, special circles, Kindful kids retreats and much more. In Surat, also a beautiful community has emerged and various projects have rippled from Awakin circles like a monthly Karma Kitchen, Awakin for Kids, and Kids retreat. In Ahemdabad, Kishan started weekly prayer circles in his office; in Coimbatore a new community meditation center is coming up. In Vietnam and Vienna, more circles are starting and people are also joining from afar! In France, informal connection are building up between people connected with service space through different ways. In Romania, slowly a beautiful community is building around the circles. Smile cards and Smile decks have now been translated in local languages! 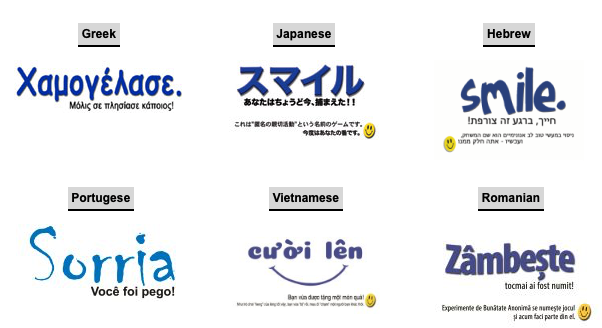 Over the years, Awakin circles have hosted and transformed so many us who just showed up. Elders, friends, families and kids too have nourished us with their wisdom and gifts not just through the weekly Awakin readings (and their translations) but also through their reflections. 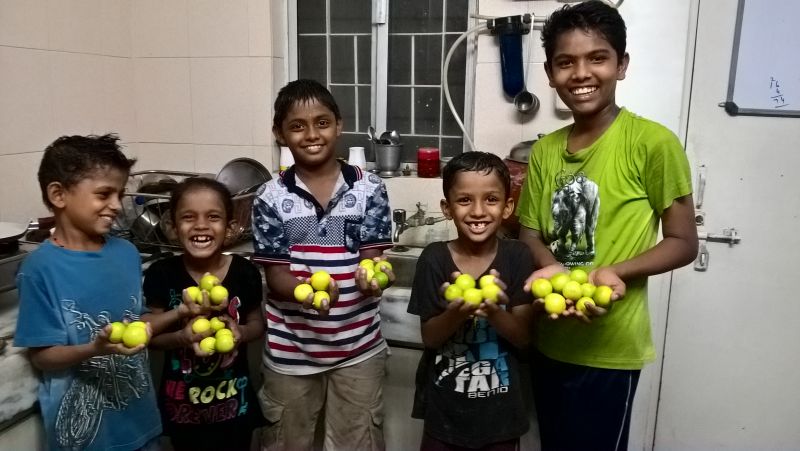 Whoever comes in is deeply touched by the pure intention of the circles and their experience ripples out in ways beyond projects and initiatives. A young boy once came to Harsh’s home for Awakin with an intention to not share anything and ended up reflecting for 90 mins! What happens when you get the gift of genuinely being heard? A smile to a stranger, a hug to a neighbor, a donation to a charity, an hour at the shelter home, an intention to leave the door open, or signing up for 10 day sits… everyone is moved to volunteer and pay forward the generosity.

The Power of Design

“A circle, like a river, is ever-present, never twice the same, always nourishing.” — Zilong

The design of the Awakin circle is so simple that everyone can join but in this simplicity lies its real power of transformation. The collective stillness, the wisdom reading, the heartfelt sharing, the deep listening, and the meal cooked and shared with so much love — everything flows and touches all.

Neeti once said, “It is not us who host the circles but it the circle that hosts us.” As Meghna says, the circle doesn't just hold “persons”, it holds their families, their thoughts, their joys, their sorrow, their journey, their lineages. So when we show up, what are we showing up to? Are we present to them? It is the simultaneous holding of the intention and the attention, that makes these circles so powerful.

These are just some of the stories from the reflections shared by the hosts. These circles have provided a sacred and safe space to hold, heal, nurture, and nourish many. There is so much inspiration in all the Awakin stories shared over the years that bringing it all in one post was beyond my skill-set! I am ever so grateful for the community that holds us with so much grace and noble friends to support each other in this journey of stillness and silence. 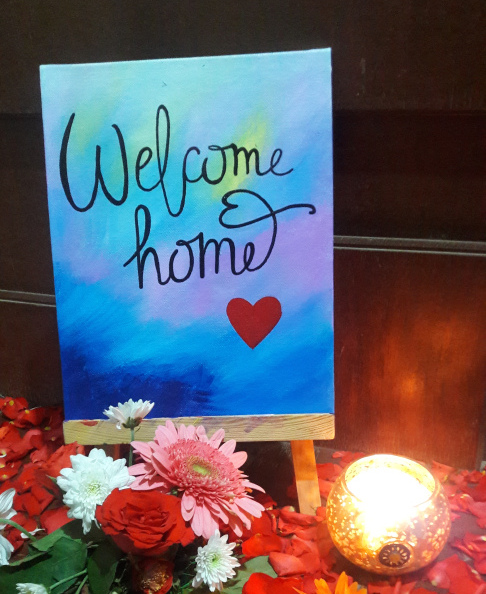 …and then at the end of it all, "there’s always the right amount of food" to nourish our bellies and our souls!