This month we celebrate 10 years since the first seeds were planted for a ServiceSpace community in London. Almost exactly to the day, on December 3rd, 2008, we hosted our first Awakin Circle in London and we are so grateful for every step of the journey since then including the beautiful people we've met along the way and the deep sense of community that holds us all together in the spirit of stillness and service. We are especially grateful for the incredibly inspiring and committed anchors behind all the magic, who serve so selflessly in holding space for many amazing gatherings over the years. This snapshot shares a bit about the journeys of each local anchor in London and how they got involved... 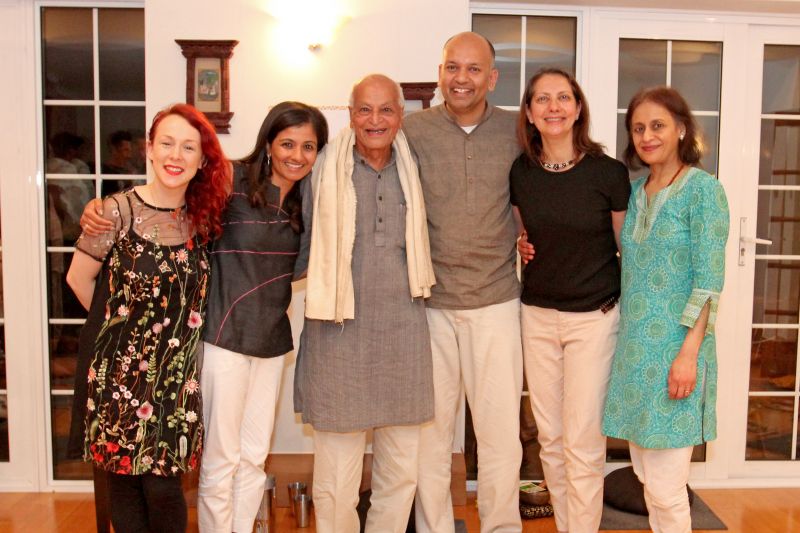 They say a picture is worth a thousand words, but in this case I'd say that this picture above holds a thousand stories :) It's the only photo we have of all four of our London Awakin Circle Hosts together in a small group, which was taken at an intimate deep ties circle we held in April 2018 this year with around 20 noble friends. I'm sure it's no coincidence that the two others in the photo are an elder whose life journey has deeply touched all four of ours, Satish Kumar, and of course Nipun, who has laddered each of our journeys in beautiful ways over the years.

It's been a joy to think back 10 years ago to when we hosted the first Awakin Circle in London, without any agenda. My simple intention was to hold space together with others who resonate with these values, trusting and knowing that this would nourish my own journey in a deep way. There was no plan, not even a thought at all about how it may create any ripples let alone a beautiful community. I remember clearly all 6 guests who came to that first circle even though I was meeting five of them for the first time that evening (the other one I had met only once before). And now, 10 years later, as I look back, our collective intention remains the same, and along the journey so much has unfolded that I could have never imagined back in 2008. I'm so grateful for all the seeds that have sprouted, for all the people whose journeys have played a part in nourishing the soil, watering the seeds and shedding light on them to inspire blossoms to emerge and for everyone whose lives have blessed mine in countless ways, both visible and invisible.

It Takes a Village...

I couldn't agree more when Meghna shared recently on a Community Anchors call how it takes a village to create community. For the first few years, I was the only local anchor in London and at that time there was lots of support from active volunteers locally who were ready to help whenever we hosted different types of events and gatherings. Around six years ago, along came Ani, who was inspired to host Awakin Circles at her home after listening to her heart as it searched for ways to be of service and to cultivate somewhere closer to home following her years of traveling to India to serve at the Gandhi Ashram. We connected so quickly and deeply and were off co-creating many retreats and gatherings together over the coming years, including our first-ever one-day Inner Service Retreat in 2013 hosted at her home! We've become family over these years and truly feel like sisters in service -- can you believe our husbands are even lifetime supporters of the same football team! :) Coincidence? Probably not :) 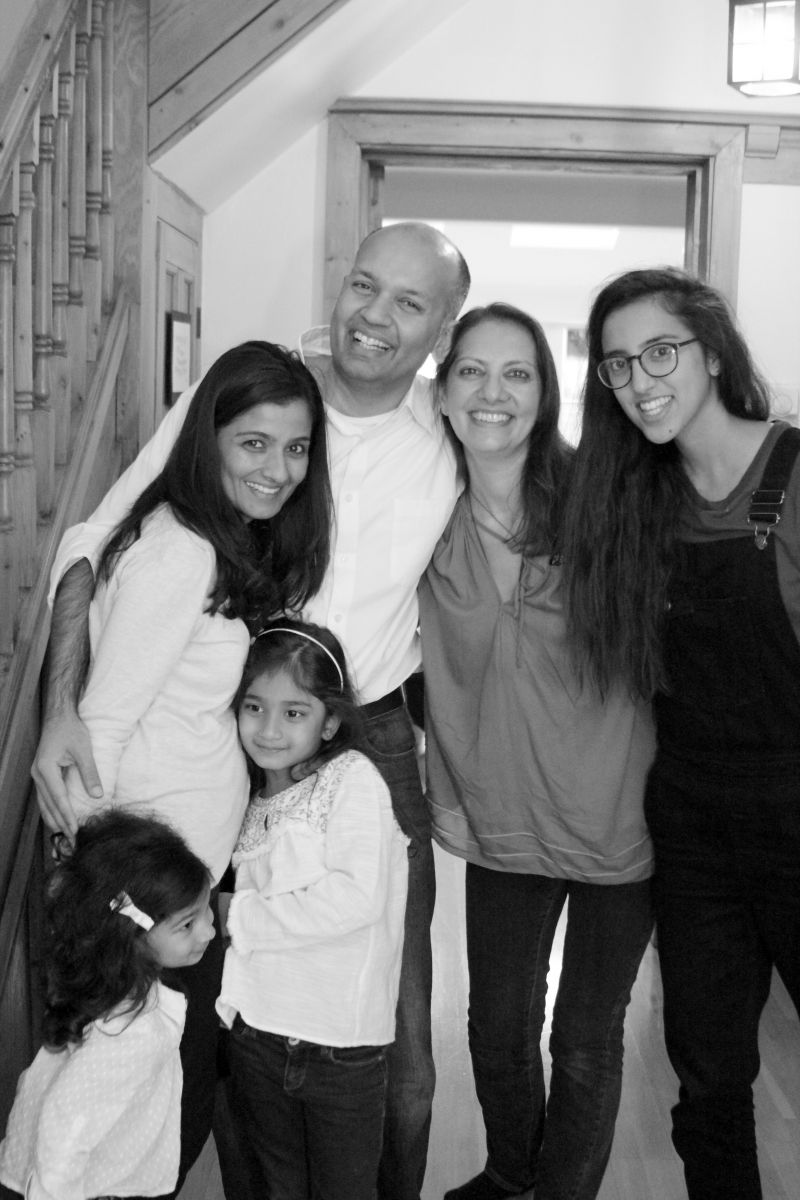 Ani and I with our daughters, Devika, Sareena and Ariyana, alongside Nipun at a Youth Retreat in 2016 at her home. 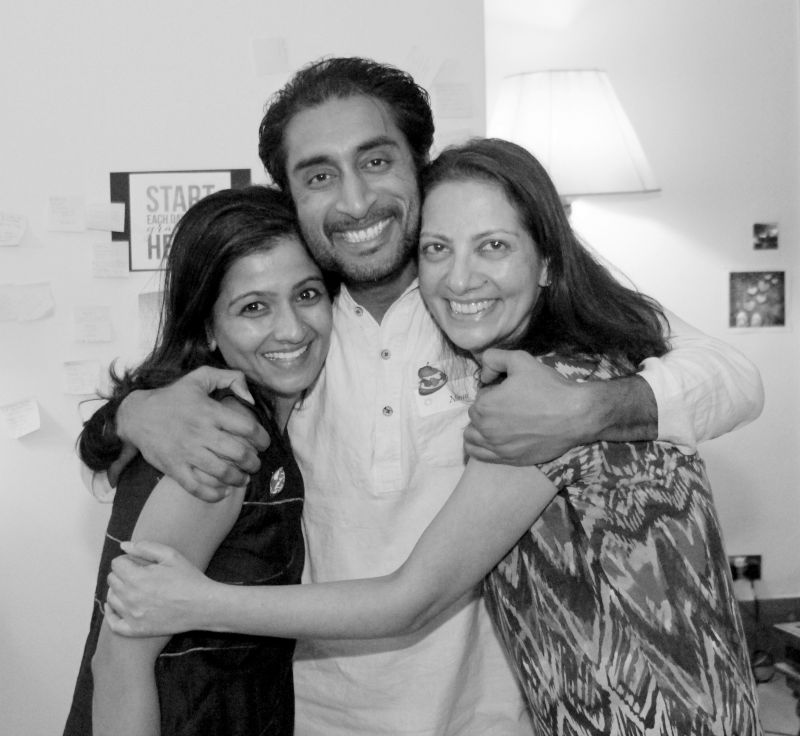 Ani and I with Nimo at a one-day retreat at her home, where we reflected on the theme "The Journey from the Head to the Heart" during Nimo's first Empty Hands Music pilgrimage visit in November 2014. 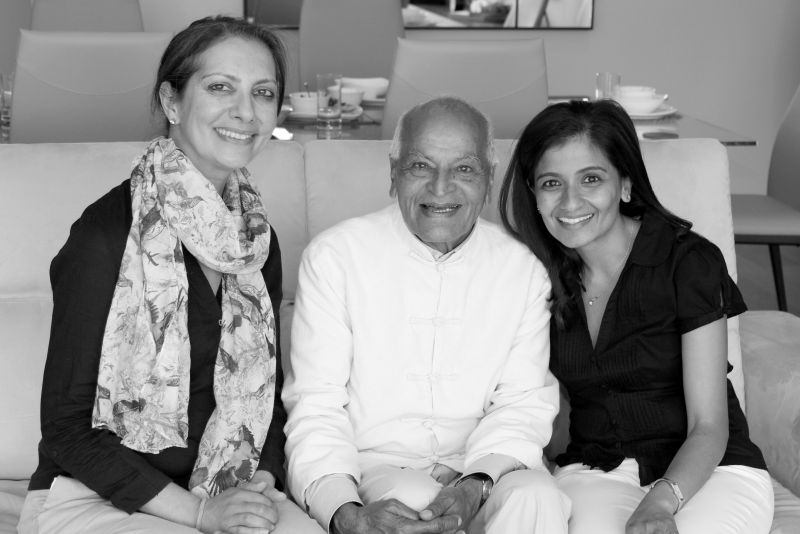 At an intimate tea circle with Satish Kumar in June 2016. 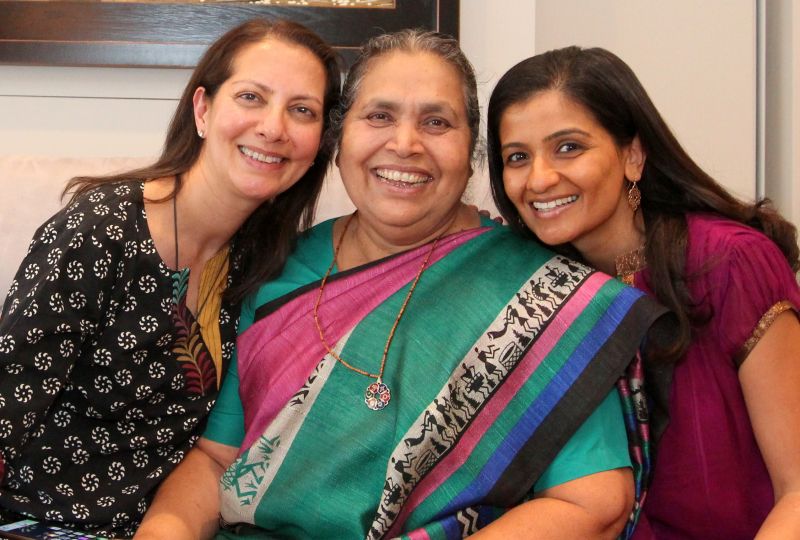 With Sister Lucy at an Awakin Circle at our home in May 2017. 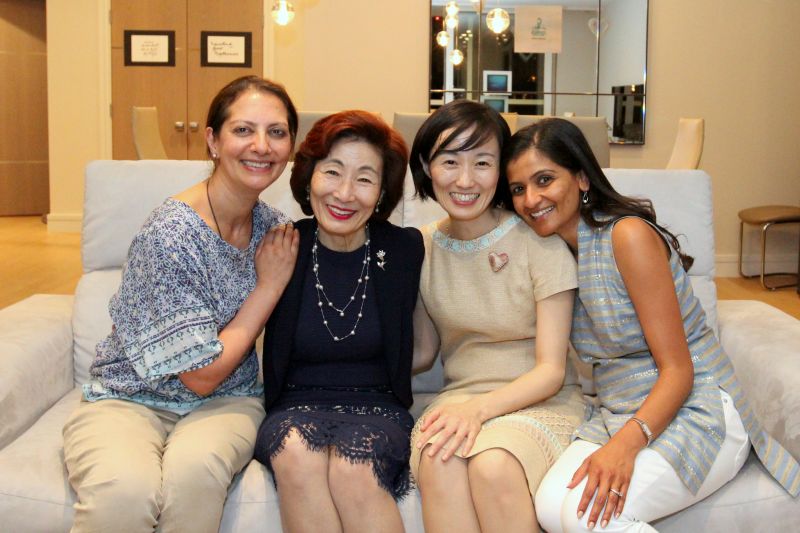 Ani and I at an Awakin Circle at our home with Maki and Masami san in June 2017. 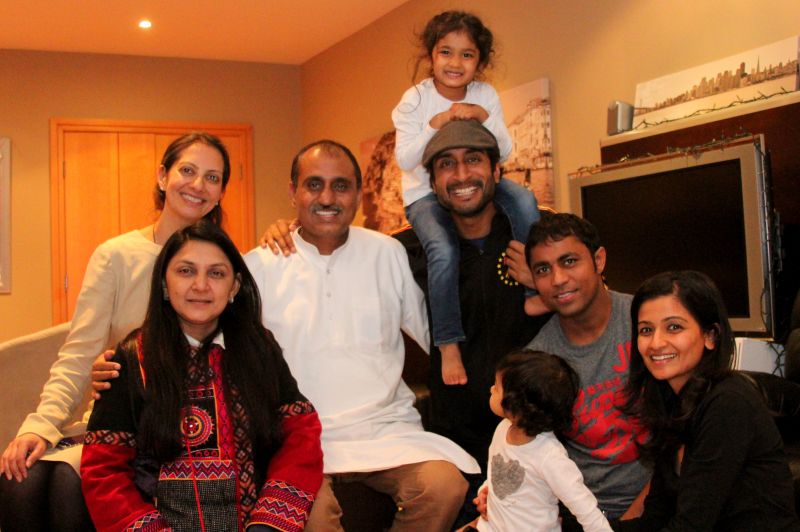 A surprise visit when Ani, Nimo and Upen brought over Jayeshbhai and Anarben to our home for a spontaneous visit in Nov 2014.

The Family Continues to Grow...

A few years later, Mita came to her first ServiceSpace event, which was a one-day retreat with Nipun and Satish Kumar. Moved by her experience, a year later she and her husband hosted a talk in their local community to share inspiration in Harrow, which was a dialogue with Nipun, and soon after she began hosting Awakin Circles, retreats and more at her home. More recently, she was even moved to offer her yoga classes in the spirit of gift and took inspiration from Pranidhi's offering at her yoga studio in Los Angeles. 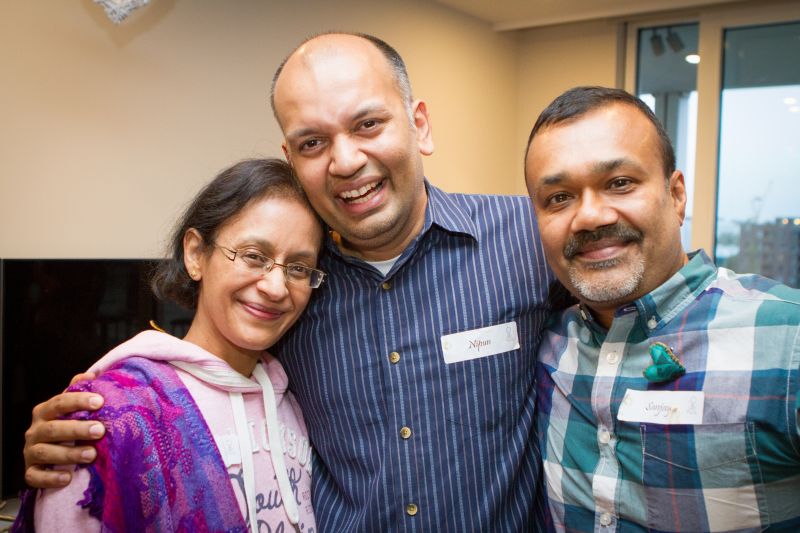 Mita and her husband Sanjay with Nipun at the first retreat they attended in Oct 2015. 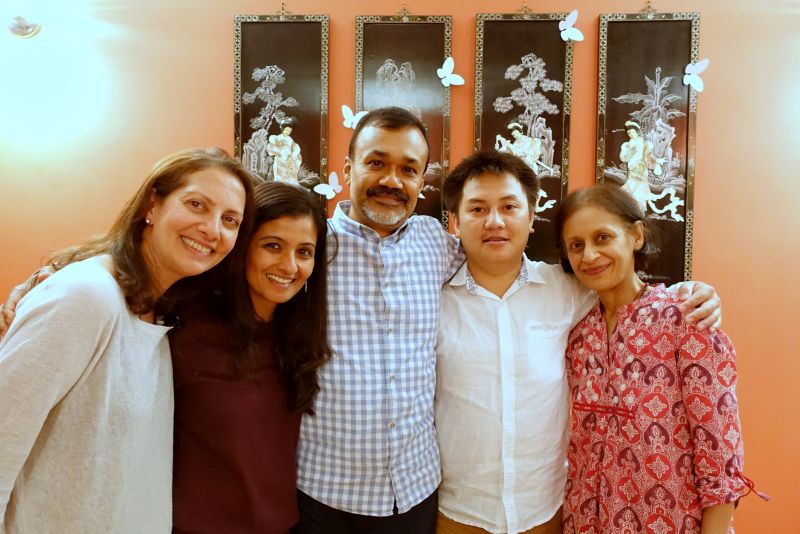 L to R: Ani, me, Sanjay (Mita's husband), Milan Rai and Mita at the first guest speaker circle she hosted at her home in Sept 2017. 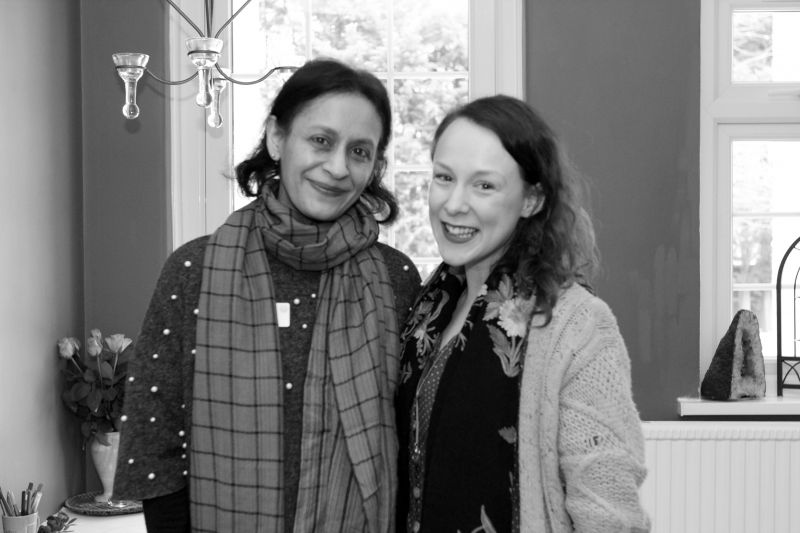 Mita and Vicky preparing to welcome everyone with lots of love and hugs to the first one-day retreat, "From Me to We" which Mita hosted at her home in March 2018. 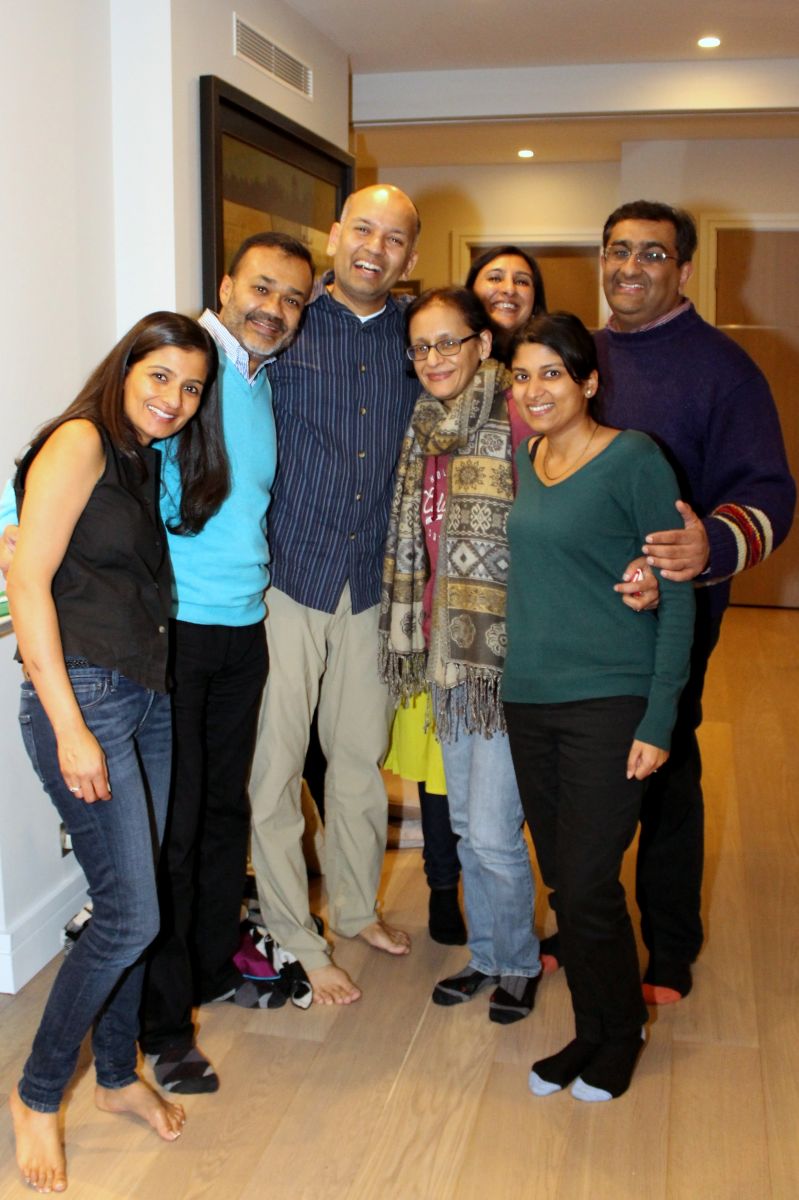 With Mita, Sanjay (her husand), Nipun and other local friends at an Awakin Circle at our home in Nov 2016, soon after which Mita began hosting Awakin Circles at her home.

We also met Vicky and Shamash at that same retreat where we met Mita and they were immediately inspired to experiment with ServiceSpace values in their own labour of love project, The Museum of Happiness. Soon after, they invited us to collaborate and host our first ever pop-up Karma Kitchen in London on International Day of Happiness, which was a joy! As soon as they set up their own independent space in late 2017, Vicky was excited to host Awakin Circles there and since then they've hosted guest speakers, one-day retreats and even the latest Empty Hands Music gathering. Last month, as they moved to a new location, Shamash seeded the idea of having a Teach Me to be WILD community movie screening in the first couple of weeks of their relaunch. Recently as they celebrated their birthdays, both Vicky and Shamash were smiling as they reflected on how everyone they wanted to celebrate with were noble friends from the Museum of Happiness and ServiceSpace communities :) 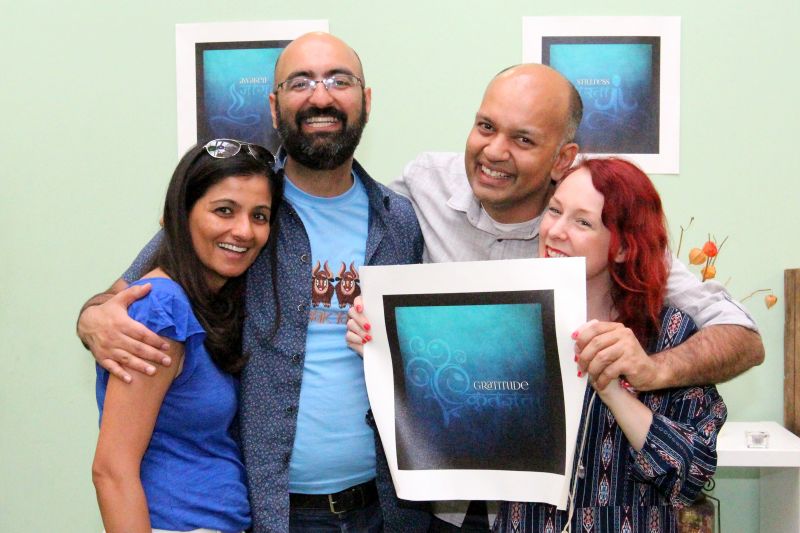 With Vicky and Shamash at the first one-day retreat hosted at the Museum of Happiness in April 2018 on Earth Day. 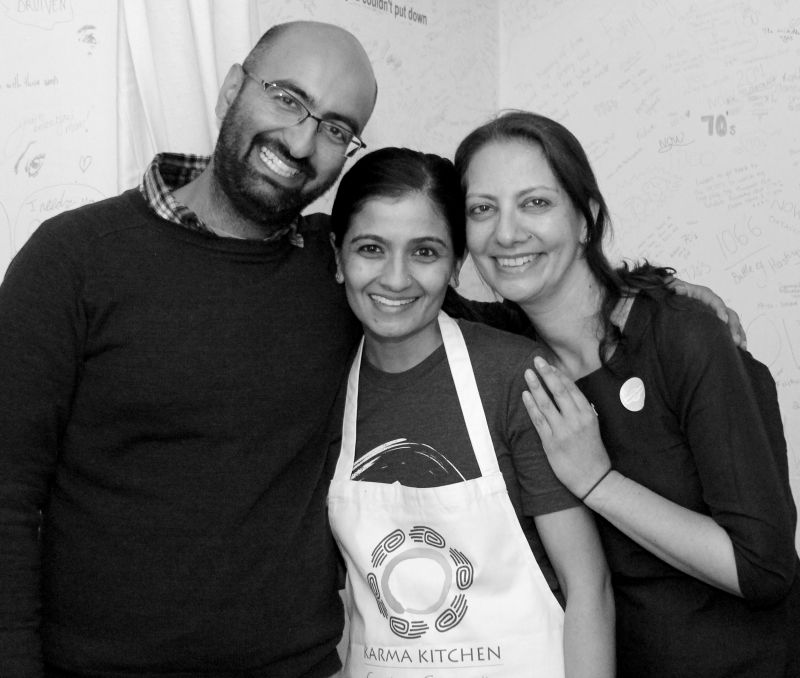 Ani and I with Shamash at the first Karma Kitchen we hosted in London in 2016, where we teamed up with the Museum of Happiness. 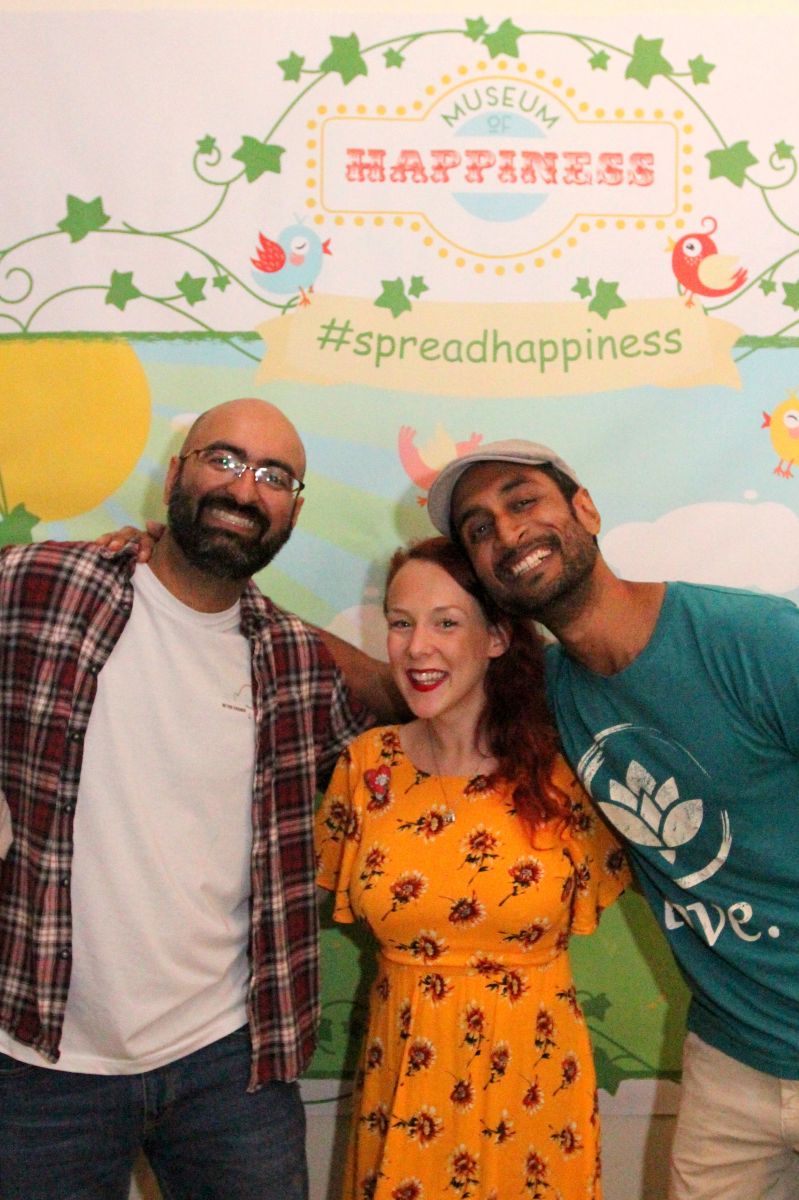 Shamash and Vicky with Nimo at the Empty Hands Music gathering they hosted at the Museum of Happiness in Sept 2018. 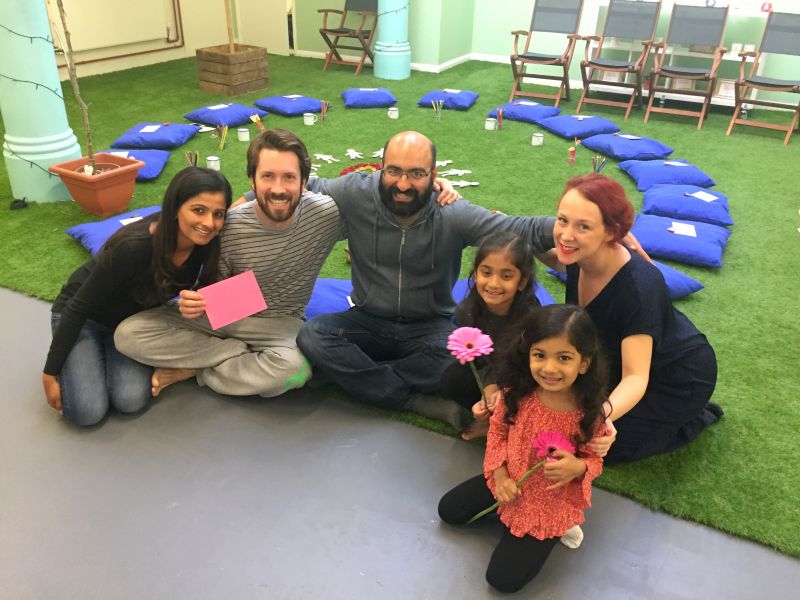 Shamash and Vicky preparing to welcome children from the Gandhi Ashram community to the Museum of Happiness in Nov 2017. 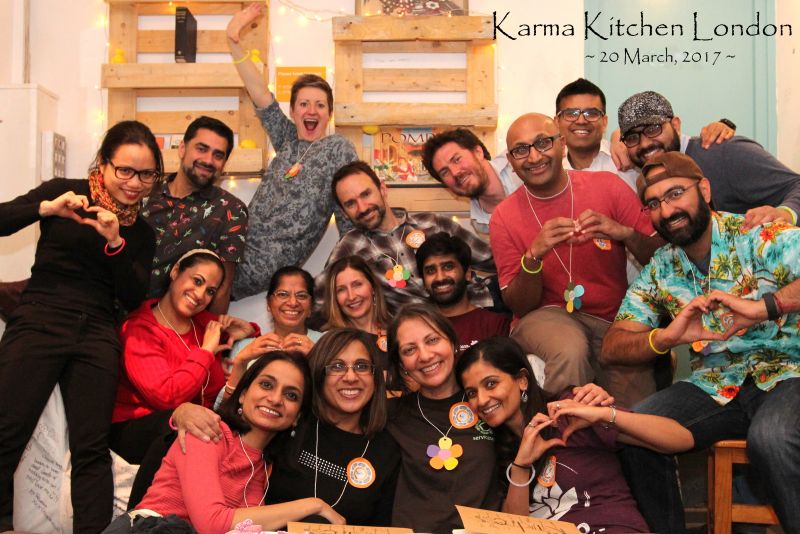 With Ani, Shamash and an amazing crew of volunteers at our second Karma Kitchen pop-up in London, which was a ripple of the first one which we teamed up with the Museum of Happiness for.

Most recently our lovely friend Ewa moved to Brighton to pursue post-graduate studies and she regularly attends Awakin Circles and retreats both in London and even during her extended service visit to Ahmedabad earlier this year. Within the first month of settling in, she's been moved to host Awakin Circles in her new home in the spirit of paying forward the gratitude she feels in her heart for all the spaces that have held her journey. Such a beautiful expression of her fundamental generosity! She shared some very inspiring reflections on the journey that led her to host her first Awakin Circle in Brighton in Nov 2018. 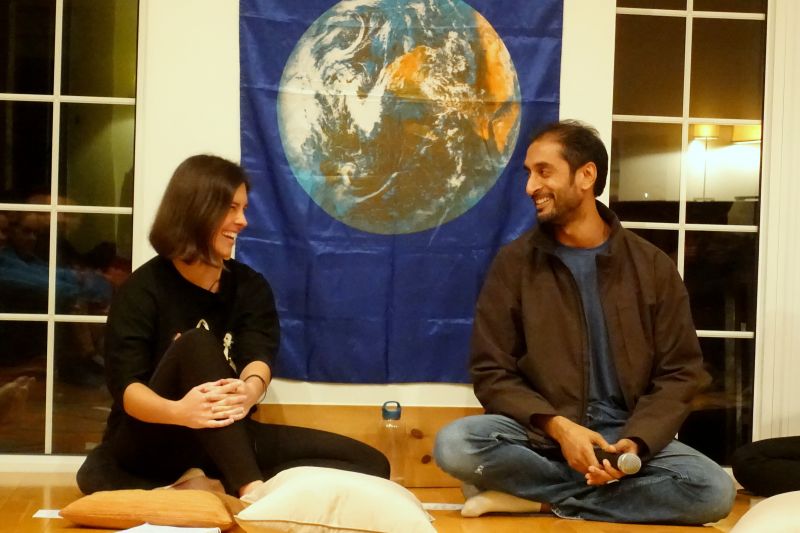 Ewa anchoring a dialogue, inviting Nimo to share stories from his personal journey at an Awakin Circle in Ani's home, Sept 2018 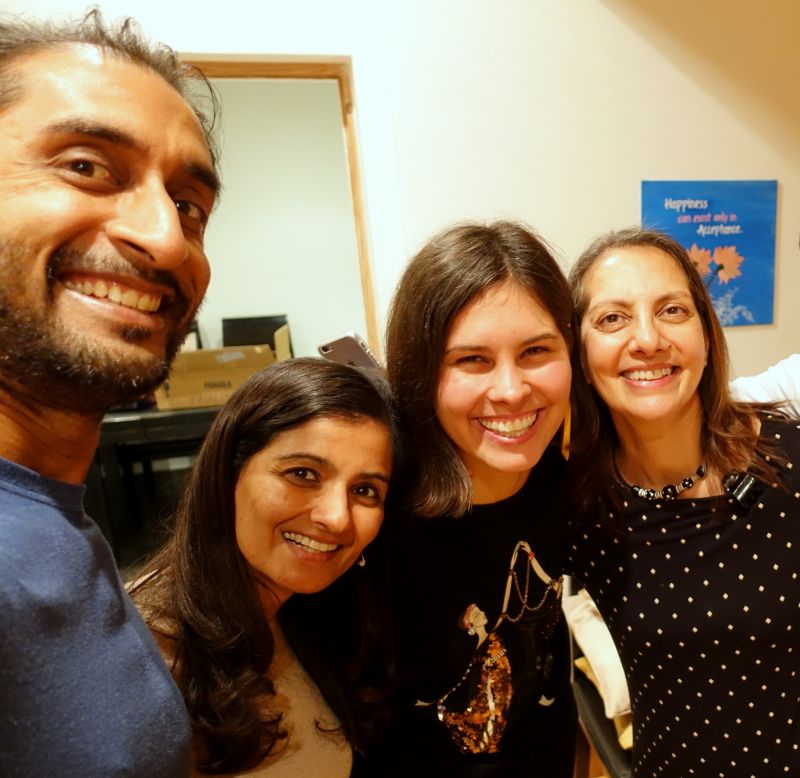 From L to R: Nimo, Trishna, Ewa and Ani after an Awakin Circle with Nimo in Sept 2018.

These local anchors have become a part of our family as we've all grown closer over the years, learned so much from each other, held each other during some of our most vulnerable moments and inspired each other to dig deeper into our own beings to serve both ourselves and the world around us. It's a gift to collaborate day-to-day with these incredible souls to hold space for each other, the local community and all of the journeys that cross our paths. When we serve together, it feels effortless and in the flow, like friends coming together to do what we love and what makes us come alive. What a blessing it is to find such noble friends where we are planted, who inspire us to bloom, petal by petal, with each passing moment -- I'm beyond grateful. 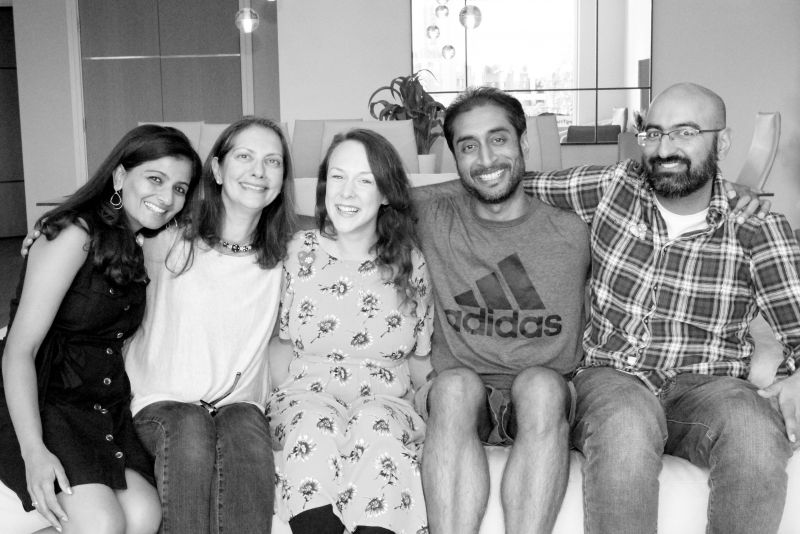 A recent photo with most our local anchors including, from left to right, me, Ani, Vicky, Nimo and Shamash at an anchors' 1/2 day lunch and circle we gathered for during Nimo's Sept 2018 visit to simply hold space for each other.