As some of you know, I was in a month-long silent retreat that just ended recently. Talk about coming back to a whole different world. :) Returning to ServiceSpace, following such a dramatic upheaval, I curiously listened into -- how did we respond? Sense. Well before wide-spread pandemic awareness, back way in February, :) Birju initiated an email thread to a group of about 100 ServiceSpace thought leaders. He opened by saying, "I don't want to fear monger, but the data I'm seeing points to a legitimate cause for concern." Lots of people wrote, with a rather wide range of responses. In retrospect, that entire thread was remarkably prescient. It mirrored that we, collectively, are on the pulse of cultural patterns in more ways than we might imagine. Not every bird can see the entire flock, but that doesn’t imply a lack of formation. :)

What patterns do we sense collectively, that we can't sense individually? 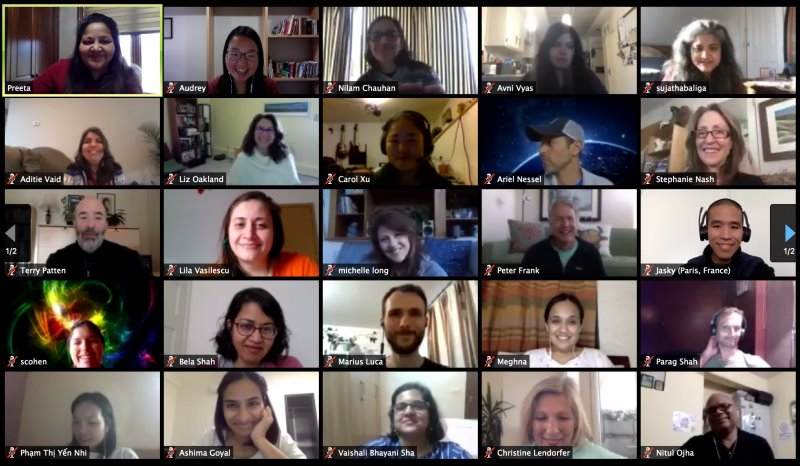 Be agile. When life gives us lemons, we make lemonade -- once we overcome the fear of change. Right away, Awakin Circles pivoted from its 22-year history to go virtual. That pipe-dream of gate-crashing Awakin Circles around the globe suddenly became real. :) In a span of 24 hours, you could easily zig-zag local circles in Peru, France, United States, India and beyond. Lemonade quickly became the meme for a global Awakin hosts call, around the nuances of holding space online.

How do we lead with emergence, well beyond emergencies? 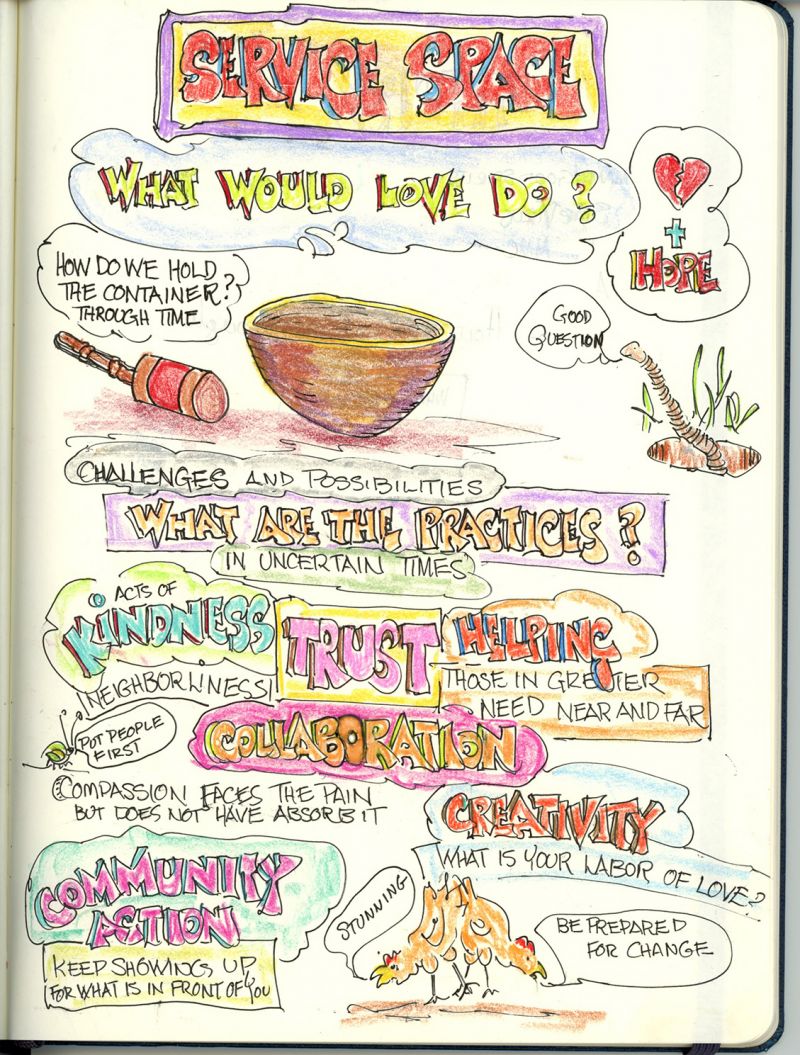 Build the field. Two weeks into March, Audrey initiated a call around “How Does A Heart Of Service Respond?”, with Rev. Heng Sure and Rev. Bonnie Rose as guests, and so many RSVP’d that we even had to upgrade our Zoom account to allow more than 100 of those camera squares. :) We experimented with online breakouts, even. Soon after, we circulated a “What Would Love Do?” response and held a global call with volunteers from Romania, France, Costa Rica and beyond. An India-wide call was the most recent one. It all helped in figuring out where to drop our anchor in a rapidly changing landscape.

What are our practices to embrace uncertainty?

All our content portals went into full-throttle mode from the very early indications. Pavi’s DailyGood team started running stories like Kindness from Wuhan, old classics like We Were Made for These Times, and new gems like This is Not a Rehearsal by a Palestinian American poet. Yoo-mi and the KarmaTube crew were featuring videos like Connected, and What Insect Teach Us About Stress. Plus Nimo's latest premiere: Prayer. Somik featured Lynn Ungar poem, Lockdown, on Awakin website before it went viral. Preeta and the Awakin Calls crew started reframing their conversations with thought leaders. Our jammin' social media team experimented with different ways to spread patterns of positive deviance. Millions of ripples, all around. KindSpring, similarly, inspired countless kind acts even with constraints. Lewski711 went on an absolute love rampage in his financially distrought neighborhood: "Today, I got choked up three times when I realized the magnitude of what was going on." Brad2 in Canada unboxes his Spiderman suit to make elder deliveries in the snow. Petroskryf in South Africa traverses fences for kindness. 86-year-old Esther is crocheting caps and masks in Illinois. Rajni feeds birds in India, while DANCE is hosts stranded Japanese students and Patjos makes signs for delivery workers in Scotland. In Spain, a family opens their windows to play music. Our beloved grandmothers of KindSpring, Mish and Mindy, gratefully echoed its 119 thousand members: “KindSpring community prepared us to weather this challenge, in ways we never imagined.” 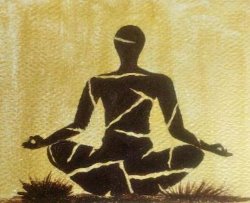 Collectively, it is a new narrative -- not good nor bad, happy nor depressing, right nor left, optimistic nor pessimistic. To paraphrase Rumi, it’s a field beyond right and wrong. A third force beyond dualities. It’s hard to pinpoint but easy to feel. After her compelling Awakin Call on “Inner Shield of Covid,” Cynthia Li wrote, “I could feel the energy of the global community while on the call, similar to when I'm practicing Qi Gong with a large community. I've done tons of podcasts and never had that experience. I was quite blown away by that, as well as the palpable generosity and kindness in the group. I'm deeply grateful.”

Is this a war or a love story?

Speed of love is a real thing. Perhaps most dramatically, at some point in mid-March, we doubled down on that narrative by launching an entirely new portal of people responding with compassion: KarunaVirus. It went from an idea to launch in two days. TWO days. Right away, we got dozens of people wanting to volunteer. In two weeks, we had oriented and built a team of 31 active volunteers, who were cranking out close to 100 inspiring stories per week. We didn’t even need to activate our compassion bot. :) Everyday, we hear about what the site means to people. Just this morning, a reader named Susan wrote: "These stories are a light in the dark. Thank you for transforming 'news' and spreading love. Movements like this just might save humanity." 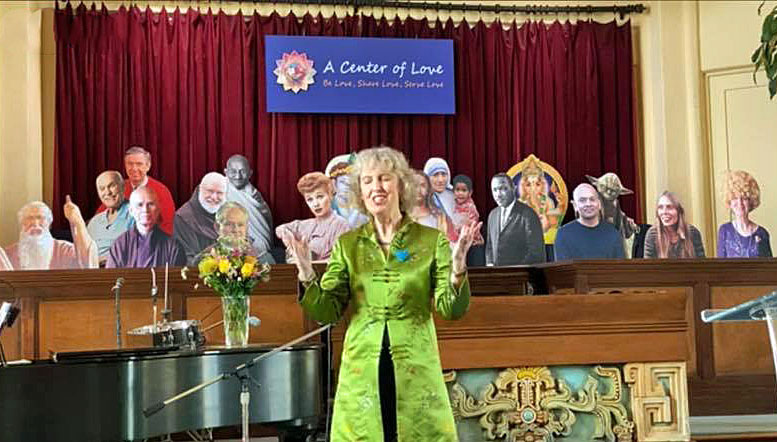 As the mainstream machinery consolidates power to return us to “normal”, what designs will allow a thousand flowers to bloom? 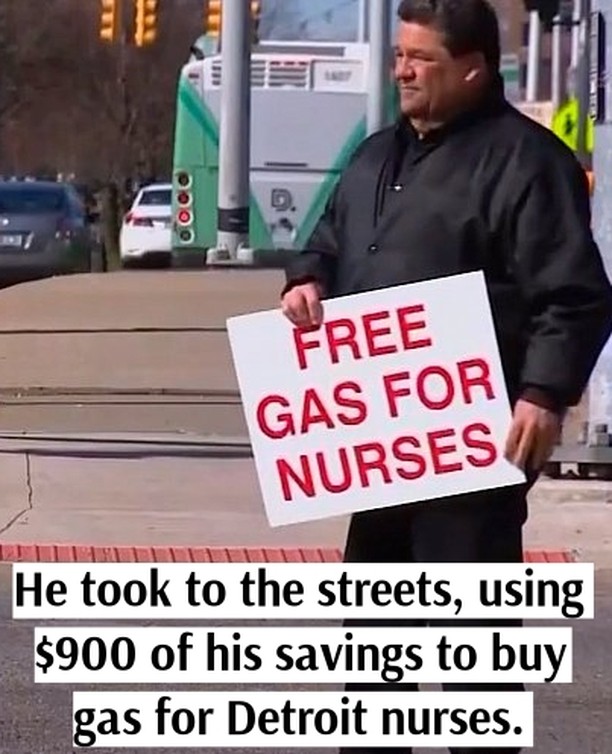 KarunaVirus volunteer, Anne pondered, “I’ve been running a nonprofit for 20 years. Does ServiceSpace provide palliative care for organizations wanting to transition to the new story?” Indeed, this month, we launched 3 concurrent Laddership Circles -- 30 project initiators, across 11 countries, held by 14 volunteers. Each peer-learning circle will create the equivalent of a 500-page book over the upcoming six weeks. Two more circles are set to start soon. Entire laddership community, with hundreds of alumni, is using this opportune moment to push bounds of a new paradigm. Edurado moved to “honor pricing” for his youth program, Bijan's relief work is Germany is holding new questions, David Griswold is accepting kindness capital for his children’s book, Sangeeta sent 49 HEAL fellows to Navajo Nation with a new story, David Bullon is supporting a retreat center doing unTickets. To support the growing wait-list for future circles, Audrey and her vastly talented global Laddership crew are busy concocting new ways to meet this inflection point in history.

How do we midwife the new that is being born, while also hospicing the old that is dying? 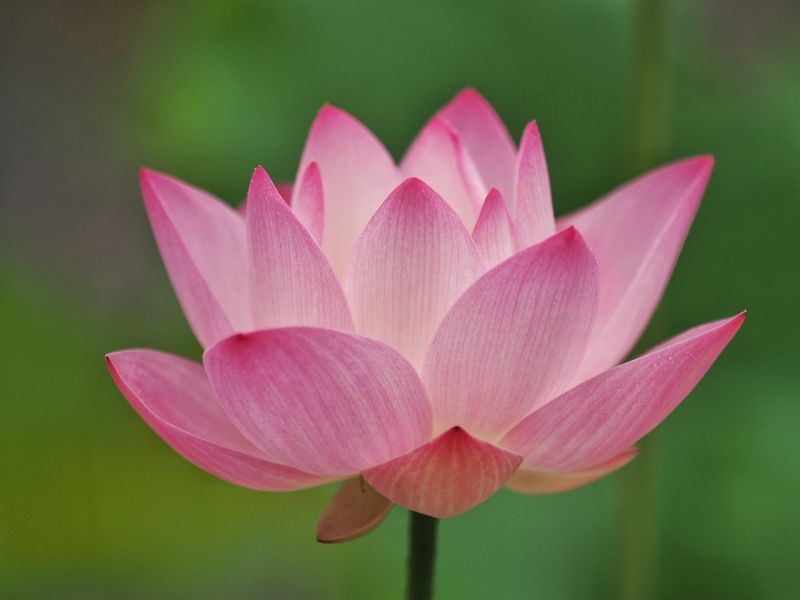 A throbbing ecosystem. When a field is animated with deep connections, the small act can have a magnificent ripple effect. Or as the old proverb goes, “When the lotus blooms, the bees come of their own accord.” That flow is the subtlest design principle of ServiceSpace. Through our subtle personal practices and small be-the-change acts, we awaken compassion in our hearts to activate the depth of relationships. And that’s it. Rest happens by the ripple effect, which is actually a tidal wave when nature has got your back. To respond to people’s hunger for the ServiceSpace lens, we posted a notice of a conversation between Parker Palmer, Michael Penn, and Mary Pipher. 2497 people RSVP’d. Kozo joked that perhaps it was because Parker, Penn and Pipher sounds like a great band name. :) For the first-time, we live-streamed the call as a video webinar. So much wisdom. Post-call, hundreds wrote back. With Parker, we are now exploring a hybrid of Awakin Circle and Circles of Trust. A follow-up call, where the listeners are the speakers, is forthcoming. Other conversations, like ‘Power of Questions’ with John Malloy, are on deck too. In parallel, we whipped up the infrastructure for a webinar series. Not only will upcoming Awakin Calls be video-streamed, our India ecosystem is poised to launch a whole new Awakin Talks format on that platform.

What starts with a simple thought or a conversation, just keeps on going and going and going -- because our design principles strip away so many of the roadblocks, and because we work with an ecosystem.

Few days ago, I spoke at the Mayor’s Interfaith breakfast in Lincoln, Nebraska. By itself, a talk can only do so much. But if a cocoon of laddership contains our small act, an entirely different possibility unfolds. In this case, Preeta’s *laddership* turned ripples into waves. Post-event, D’arcy wrote about someone who took four pages of notes to apply the principles locally, Alyssa is collecting beautiful stories of kindness that people are submitting, one local religious leader wants to start Karma Coffee, and the Mayor’s ServiceSpace-inspired speech on compassion and networks will soon find itself on DailyGood. Today’s press coverage announced a partnership of four organizations to launch NeighborLink -- a new initiative connecting elders with volunteers around deep listening. A city-wide 21-day challenge is in the works, alongside KarunaVirus Lincoln Edition. It’s a cascading domino effect, that likely will continue on and on. At the follow-up press conference, Preeta articulated an insightful corollary:

The virus is teaching us how it spreads via: (a) our external connections to others, (b) our internal immunity, and (c) the contagious factor of the pathogen (often known as R-nought value). ServiceSpace, through its various inner and outer platforms, does the opposite: (a) boosts our external connections, (b) lowers our immunity (resistance) to the signals of the heart, and (c) inserts drops of virtue (with high R-naught factors) into the network.

More fundamentally, a pandemic reminds us that everything is connected. And in a many-to-many way. Yet, while a virus inspires us to cooperate to preserve our Self, can such action emerge while dissolving the Self? That's at the core of the ServiceSpace inquiry. Covid-19 is surely contagious, but our hypothesis is that compassion is even more contagious. Such times of collective suffering make virtue visible, and even if the light stays on momentarily, we can't unsee the good that we saw.

It’s time to get to work.

P.S. Few ServiceSpace anchors are having a brainstorming call this Sunday: Responding to Emergence, Designing for Uncertainty Anyone is welcome to join and listen-in.

Smiles From 65 Members Login to Add a Smile