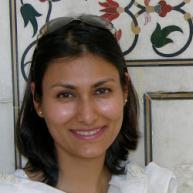 A Pregnancy That Gave Meaning To Medicine

May 03, 2017, 3 comments, 10 smiles [Below are some of my comments as the last Healing+T circle.  Prior to holding the mic, I had no idea this is what I was going to share -- but the collective energy of the group was having its effect on me. :)] I work as a pediatric doctor in a large HMO and I've been working there for over 10 years now.  I'm sure some of you will probably identify with this. When you come out of medical school and then residency, you have this vision of saving people.  You're intubating patients and you're giving lifesaving medications and you're doing tracheotomies and whatnot -- to actually save people's lives. After I did my pediatric residency, I wanted to do a fellowship but I was so burned out by my residency that I decided to take a year off.  Then somehow I landed this job and started working as a community pediatric doctor. ... Read Full Story

May 18, 2013, 66 comments, 9 smiles A new campaign in Mumbai uses the famous lunchbox network to feed the street children of the city.  Some would define it as “social innovation” – using an existing infrastructure for social impact. What is Share My Dabba? Share My Dabba is an initiative to get uneaten food in dabbas (lunch boxes) to hungry children on the street. It’s not charity but an attempt to create a practical, every day system for food relief. Why Share My Dabba? 300 million children across the world will go hungry today. 200 thousand in Mumbai, with 2 starving to death. All this while we leave behind food. In the dabbawala system itself, out of the 120 tons of food transported, approximately 16 tons is wasted. Wouldn’t you rather share this with a hungry child than throw it in the bin? How does it work? On a diet? Not feeling that hungry? Skipped lunch? More food than ... Read Full Story