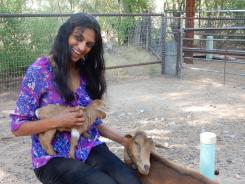 My favorite book is ...test

One thing I'm grateful for is ... test

Linda Scotson: Breathing Miracles Into Being: A

Jul 30, 2020, 2 smiles This week's Awakin Call guest: 'Linda Scotson: Breathing Miracles Into Being: A Mother's Journey From Artist To NeuroscientistReflection questions: When her newborn son was diagnosed with severe cerebral palsy, artist Linda Scotson set on a multi-decade quest to give him a future beyond the doctor's predictions. In the process she earned a PhD on the neuroscience of abnormal breathing, studied its adverse impact on the mind and body and developed a technique that transformed her son's life, and thousands others besides. In the face of the seemingly impossible, Linda asked questions no one else was asking, and discovered a path forward. When have you responded to a situation of hopelessness with creativity and curiosity? What was revealed to you?

Jul 19, 2020, 1 comments, 5 smiles Last Saturday, we had the privilege of hosting Awakin Call with Danish Kurani. Can architecture be life-changing? Architect Danish Kurani has demonstrated that it can. Recent decades have seen advances in pedagogical methods, but the shape of our learning spaces remains largely unchanged since the 1950’s. Think: rooms filled with desks in rows all facing front, an environment stifling innovation and creativity. Seeking a remedy, Kurani links architecture with student-centered learning. His innovative designs help schools empower students and teachers in the learning process, thus helping communities prosper. His most recent 2020 project is Riverbend, a boarding school near Chennai, India, where the design of the campus is based on studies about what makes people the happiest. The answer is relationships, thus the design leads students of all ages to cross paths. Kurani's other recent projects support underprivileged kids in Brooklyn and elsewhere. Moderator Negin Khorasani has a degree in architecture herself, ... Read Full Story

May 09, 2020, 1 comments, 5 smiles Poetry, prayer, sacred songs, and story-telling with kindred strangers were all part of last week's enchanted Awakin Call with Noirin Ni Riain & Sons. The gifted Irish trio transported us into a circle that embraced ritual, reclaimed ancient roots and reconnected us to the delicate whisper of our own hearts. "People ask us 'How in the name of God, do you do it, work with family, that is?'" says Owen, "And the answer is-- 'With extraordinary lashings of forgiveness!' If you have ever played music with your family, its a cacophonous mess." Mícheál chimes in: “The concerto of family relations!" Nóirín adds with a twinkle, “Insanity is hereditary-- you get it from your children.” Listening to this family in conversation is like being invited to sit around a kitchen table with old friends -- it is that fun, and that fluid. For those who missed the call, or are hungry for more, don't ... Read Full Story

Song Of The Cocoon: Tuning Our Heart's Ear In Times Of

May 04, 2020, 1 smiles Song of the Cocoon: Tuning the Heart's Ear in Times of Transition: Thursday, May 7th, 9-11AM PST Close on the heels of a marvelous Awakin Call with Nóirín Ní Riain, comes an irresistible offering of triple the inspiration! Nóirín, together with her beloved sons and collaborators, Owen and Michael O'Sulleaibhain, regularly leads sacred tours in Ireland's Golden Vale. The three of them are world-renowned performers and keepers of Irish sacred tradition. In the context of the 2020 global pandemic, they have initiated Dámh Imeall - The (h)Edge School -- a series of online retreats that offer immersive experiences around thoughtfully curated themes. This webinar will be one of their gifted offerings, focused on tuning our hearts' ear to the song of our cocoon. "Cocooning" is the term Ireland has adopted for the current shelter-at-home phenomenon. It is an evocative term that evokes the mystery of the caterpillar's confinement, and holds an implicit reminder ... Read Full Story

May 01, 2020, 7 comments, 32 smiles During The Power of Questions circle we recently held with John, listeners spent a few minutes sharing their responses on a Google doc to the question: What is the weather in your heart at this moment? Later we discovered that with a little bit of rearranging, these state-of-the-heart check-ins create a patchwork quilt of poetry! :) Not a single additional word was added. It's confirmed. We are all poets together.

Nuggets From Parker Palmer -- With Mary Pipher And

Apr 20, 2020, 2 comments, 9 smiles Last Thursday, we had the privilege of hosting a unique conversation with Parker Palmer, Mary Pipher and Michael Penn. The two hours flew by. A symphony of wisdom, humanity, grace, and humility that sung us in touch with energized fields of possibility, individual and collective. A detailed transcript will soon follow, but in the meantime here are an assortment of gems gleaned from the treasure trove of our time together. On the Current World Situation: Apocalypse at its root means ‘to uncover’, ‘to reveal.’ And a lot of things are being revealed now. We all have the opportunity to do something that will help tip the balance as the revelations pour in from this pandemic. To tip it towards life-giving rather than death. If we can name our situation clearly we can then lean into a variety of answers or at least partial remedies to that problem. A little story from medical school – it’s about ... Read Full Story

Mar 21, 2020, 2 smiles Last Saturday, we had the privilege of hosting Awakin Call with Carrie Newcomer. Carrie Newcomer is a singer, songwriter, recording artist, author and educator. The Boston Globe described her as a “prairie mystic” and Rolling Stone wrote that she is one who “asks all the right questions.” Krista Tippett notes that Carrie is “best known for her story-songs that get at the raw and redemptive edges of human reality.” Newcomer is a committed Quaker who connects her songwriting with her faith and sense of social justice. She has produced 18 solo CDs, eight collaborative CDs, three DVD’s, and two LP’s. She has had an ongoing, long-term collaboration with Parker J. Palmer, with whom she has co-written several songs and performed a spoken word/music in live performance. Many of the themes in her work come from friendships with activists, authors and religious figures. In 2010, she was selected one of the 50 ... Read Full Story

Mar 18, 2020 This week's Awakin Call guest: 'Carrie Newcomer: Asking The Right Questions In SongReflection questions: Our guest this week is a renowned folk singer and recording artist who seeks through her music to initiate conversations about life's deep questions without suggesting pat answers, and to "describe in language those things we experience that have no words." How do you remain open to asking questions about the formless and wordless, without seeking simple answers?

Jun 30, 2019, 6 smiles Last Saturday, we had the privilege of hosting Awakin Call with Lewis Hyde. Myth, imagination, art, the public domain, tricksters and the gifts of forgetting are just a few of the topics that interest acclaimed poet, writer and cultural thinker Lewis Hyde. Hyde has been writing for more than three decades, with high-profile awards along the way, including a MacArthur “genius grant” in 1991. David Foster Wallace called him “one of our true superstars of nonfiction.” Hyde’s fans — among them Zadie Smith, Michael Chabon and Jonathan Lethem — routinely use words like "transformative" and "life-altering" to describe his books, which they’ve been known to pass hand to hand like spiritual texts. In continuous publication since 1983, his book The Gift: Creativity and the Artist in the Modern World has been praised as the most subtle, influential study of reciprocity since the French anthropologist Marcel Mauss’s 1924 essay of the same ... Read Full Story

Lewis Hyde: On Creativity, The Commons, And Forgetting

Jun 26, 2019 This week's Awakin Call guest: 'Lewis Hyde: On Creativity, The Commons, And ForgettingReflection questions: Our guest this week is a renowned writer whose latest work examines the value of forgetfulness, of letting go. What has been the value of forgetting in your life?