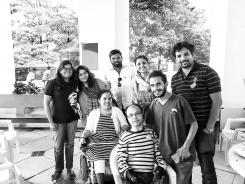 I'm joining Service Space because ... This space helps me remain a loving and kind human

A good day to me is when ... I have been able to connect with someone at a deeper level

My hero in life is ...Several people from Service space group

My favorite book is ...Stories and posts on Service space and associated sites

Aug 25, 2016, 1 comments, 5 smiles 'Posting on behalf of Priyanka Agarwal, who is a bold and courageous, visually challenged female. She is working towards spreading awareness and message of Inclusion.' ******************************************************* On 18th June 2016, an inclusion event was held at Bangalore called "Unseen Delicacies". This event was one of its own kind-- as the theme was to demonstrate culinary skills of a person having visual disability. I approached Madhur, a volunteer of Servicespace and expressed an interest to organize a cooking event. She was thrilled and we started our planning. Earlier in 2015, the idea of doing an inclusion event came up during my introduction with Nipun Mehta sir, at India Inclusion Summit. Our requirement of having participants cook in front of audience, was best possible in a posh restaurant, which we blocked. However, later due to financial constraints, it was not possible to go there. At this point of time, I felt... it might not work and we will have to ... Read Full Story

In The 'Valuable Childhood' Class On ...

Apr 11, 2016, 1 comments, 11 smiles In the 'Valuable Childhood' class on 10th April, an exercise was to imagine a beautiful village. A young child imagines the sun, fish and people are smiling :) Kids are playing cricket with friends. Tree is giving wonderful fruits and also holds a nest for birds. The lake is a home of colorful fish and gives clean water. Men are travelling in good vehicles and there is a big letter-box just outside. I infer: There is beauty, color and life all around. There is generosity and abundance. Speed of life is comfortable. Everyone is working at peace & are happy. There is community, friendship and play :) Good, gracious!! Even little ones know when/how life can be beautiful :)

Mar 29, 2016, 1 comments, 8 smiles My mother's family believed in sacrifice of materialistic needs for dignity, which was more important. Whether it was a food item, a book, a trip or some success etc. we were expected to remain disciplined, take what we get as our honest due and put value-oriented efforts towards what we want for future. Such environment, people and practices help one to develop a strong personality. Sadly, these have generally gone missing nowadays. Present society defines success with winning and having more stuff. Our upbringing creates human beings, who can easily give-in for small pleasures and gains. The '21 day Challenges' on 'Kindspring', are one good medium to practice thought/habit patterns that help in learning better ways. I have attended few challenges seriously, like 'Simplicity', 'Gratitude' and they were able to make a difference. I do make my own practices around denial or discipline, as required for re-gaining the inner strength, I possessed as a child.

Journey Of Opening My Home -- And Heart

Mar 29, 2016, 2 comments, 11 smiles In last week of July 2014, I moved into an apartment in Bangalore and for the first time I had some extra space.  I felt like utilizing it in service, so I sent out an email to ServiceSpace friends, offering the space for anyone who needed it.  That email itself was like a declaration to myself, and it opened up many new doors -- right in front of my eyes.   Just because of my focus on service, in a span of about a year, here's a few projects that organically emerged ...  ‘Valuable Childhood’: To teach good values to kids, and thus nourishing the roots of future generation, was my dream for many years.  In Dec 2014, it came true when I started giving 2 hour classes on ethics every alternate Sunday.  Typically, 4-5 kids from my neighbourhood would come and I offered it freely for a year.  The discussions and practice ... Read Full Story

Mar 10, 2016, 3 comments, 12 smiles You might remember reading the story of Ashwin Kartik.  He was India's first quadriplegic to get a college degree, and an engineering job; but he got there because of his friend, Bharat, who was his scribe. As a scribe, of course, he couldn't take his own exams, so he decided to delay his schooling for a year. Bharat was socially castigated -- even his parents refused to talk to him and practically disowned him . When Ashwin got into an engineering school, Bharat stunned his community even further. He decided to delay his education for 4 years!), so he could continue to scribe for his buddy Ashwin! A truly remarkable story of friendship. They've been in touch with some of us, and we've also invited them to our year-end "Moved by Love" retreat for the specially abled population.  This morning, we got a loving email from both of them, where he proudly shared his latest talk with folks like the Prime Minister of India in audience:

Dec 31, 2015, 9 smiles I was allotted a room for my stay, where below picture existed. It immediately reminded me of my 12 year association with Servicespace earlier known as Charityfocus. As I have mostly been an online follower and volunteer for small acts as inspired, the experience has been like a prayer for me, all along. It has transformed me in several (may be thousands) ways, many subtle, profound ones. Around 3 years back, I took up the practice of doing 3 bows every morning as well as evening to be grateful for 3 months. Every time, one of these three bows was for Servicespace. I had a habit of getting stuck with the negative. The experiment enabled me to observe positive and feel happier about everything which was good and worthwhile in my life. May God bless this spiritual journey.

Startup Retreat- Servicespace Value-add Vs. A ...

Dec 25, 2015, 12 smiles Startup retreat- Servicespace value-add vs. a business event Last week Dec 18-20, we had a start-up retreat with 'Moved by Love' team at Ahmedabad  where I was one of the volunteers. Earlier, during this year, I have also been a volunteer/audience with business and social enterprise start-up events of premium class, in Bangalore. When I compare these, our event seems so different, in-fact outstanding in following 2 aspects: 1. No one changed their business plan in the commercial/ social enterprise events. The participants competed and tried to gain value, win funds etc. However in our startup retreat priceless inner transformations contributed to change in many business plans, mode of operations etc. The idea became a gift of compassion and value to others and self. These shifts are an amazing achievement to cherish!! 2. There was networking at the premium events to get business purposes click for future. However, at our MBL start-up retreat, the ... Read Full Story

Today Is World Day For Farmed ...

Oct 02, 2015, 7 smiles Today is World day for farmed animals(http://dayforanimals.org/). People are taking fast against slaughter. Though, I am a pure veg, I took a fast too. It was first time that i spent a day fasting, thinking and praying for animals, though i have been wanting to do something for them from long time. I felt some sweet connection and belonging to the world of animals today. I feel bliss and content.

Jun 14, 2015, 1 comments, 6 smiles This is the imagination of 7 year old Ayush for a peaceful world without killing, fights or weapons, during values education class. exercise

A Gift Could Range From An ...