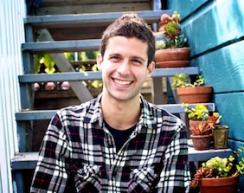 I'm joining Service Space because ... to be in community

A good day to me is when ... brought to bear, received, and appreciated goodness in the world

My hero in life is ...one hero is my brother, who quietly cultivates truth and consistently expresses love in his own way

My favorite book is ...one old favorite is Siddhartha by Herman Hesse

One thing I'm grateful for is ... a rock message I was once gifted that read 'everyone has something different to offer'

Jan 30, 2019, 1 comments, 11 smiles Tway began finding heart-shaped rocks on her long beach walks, and soon was finding dozens, and then hundreds. Locals who had lived there for decades remarked on how unusual that seemed, but Tway wasn't surprised--she took it as an affirming sign of the leap she had made years earlier. After listening further, she felt called to match each heart rock with a story about an act of kindness, and birthed the project: heartrocks. She's taking her time, waiting for the right stories to come in--maybe you know one? (Hat tip to a certain anonymous member of KindSpring for initially sharing this story :)) And here she is sharing some of the background story on a recent podcast called "The Kindness Podcast". In honor of the power of small, a couple related quotes: "There are very few human beings who receive the truth, complete and staggering, by instant illumination. Most of them acquire it fragment by fragment, on a small scale, by successive developments, cellularly, like a laborious mosaic." --Anais Nin "Small acts, when multiplied by millions of people, can transform the world." --Howard Zinn

Flip Side Of No = Yes, And Other Learnings From

May 22, 2018, 1 comments, 13 smiles "I knew you respected me, because [instead of getting us in trouble right away] you asked what happened first." I had asked a middle school student how he felt in retrospect about our ad-hoc restorative circle process, following a brief fight that broke out at the end of the first talking circle I co-facilated at that school. Not one to mince words--as I would come to learn and love--he reflected back a gem. I've been processing many such experiences from my internship at a K-8 school last year, and would like to try to summarize some of the learnings, as well as invite other learnings. In the context of addressing school climate, particularly in terms of encouraging healthy conflict resolution/disciplinary process & positive relationships, here are three summary points: Finding The "Yes" For Every "No" One major learning can be summarized with the phrase: the flip side of no = yes. Which is to ... Read Full Story

Sharing Blessings From A Special Union

May 18, 2018, 1 comments, 7 smiles I was deeply moved recently to be part of a special union between dear friends Nandita and Fahad. They had asked me last year if I would officiate their wedding ceremony, and after quite some dialogue and deliberation, :) I realized that given our shared connection over the years (including hosting Awakin circles together in Philly) and their unique story, it was an opportunity of a lifetime and really the only thing to do was say yes and figure it out along the way. Many friends offered support in very practical ways (and many more in intangibles ways, I'm sure): Pavi along with Birju and Anne-Marie generously shared notes from their wedding ceremony, including their vows--which themselves had been inspired by Nipun and Guri and others. Jin Chuan Shi, a monk at City of Ten Thousand Buddhas, also generously shared of his officiating experience. Nimo sent song suggestions that spoke to ... Read Full Story

Apr 26, 2018, 1 comments, 6 smiles Rethink. Refuse. Reuse. Went to a brief press conference at Berkeley Recycling Center earlier this week, where these three words served as a powerful rallying cry by 9-year-old students in Jacqueline's (aka Ms. Omania :)) 3rd grade class at Oxford Elementary. It was an honor to witness them, after having had the pleasure to visit them briefly last week when Nimo stopped by the school for a return visit, on our way up to Ukiah--as Xiao just elegantly and humorously chronicled. :) Last week, upon arriving at the classroom, we were greeted with a mason jar's worth of trash. Hmm. :) The student greeter proceeded to tell us how that was the landfill-trash contents for the ENTIRE class for the ENTIRE year so far (about 150+ days). You know Nimo, not one to miss an opportunity to highlight the brilliance of children--the following picture emerged: The classroom visit itself saw sharing from ... Read Full Story