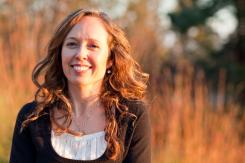 I'm joining Service Space because ... I met Nipun Mehta and Audrey Lin and was blown away by their selflessness and big-picture thinking. I also am completely on board with radical generosity and learning how to incorporate into my life, work, and family.

A good day to me is when ... I've spent the morning hiking in the mountains, had an inspiring deep listening call with a friend/colleague, and spent time playing with my three small children. Then, capping it all off with time out with my thoughtful husband.

My hero in life is ...Mary Baker Eddy, founder of Christian Science

My favorite book is ...right now it's The Surrender Experiment by Michael Singer

One thing I'm grateful for is ... my loving, supportive, and wacky family, and my great privilege to do the work I do. (peace building)

Tuesday Ryan-Hart: Equity At The Center Of Systems

Sep 16, 2020, 1 smiles This week's Awakin Call guest: 'Tuesday Ryan-Hart: Equity At The Center Of Systems ChangeReflection questions: Our guest this week believes that working together drives collaboration and the discovery of shared purpose, rather than vice versa. The real work, she says, is that which drives collaboration (or perhaps paraphrasing Rumi, that which moves diverse groups beyond whatever stands in the way of love). With this framing, what do you see as part of your real work?

Aug 08, 2020, 4 comments, 8 smiles Last Saturday, we had the privilege of hosting Awakin Call with Paulette Pipe. “It’s time. It’s time to let it go,” said Rev. Paulette Pipe on trusting your deepest intuitions. And Paulette does just that. Her life embodies trust and faith, as well as surrender to the deeper forces around and within us. A UK-born minister who served formerly as Spiritual Director of the UK Unity headquarters, and then manager of the Retreats department at Unity Village, Rev. Paulette left her full-time job, with benefits, to follow her inner voice and work for free – “doing the thing I loved most.” She leads Touching the Stillness Ministries, a vibrant organization she created to make meditation and mindfulness both practical and accessible for daily application. She is a meditation teacher who acknowledges the challenges that come with learning to meditate when one is desperately striving for inner peace, but writes that “Meditation...is ... Read Full Story

"Are You Ready To Live Gandhi's Message?"

Mar 26, 2020, 3 comments, 14 smiles A couple weeks ago, I shared, "Are you ready to live Gandhi's message?" about Gandhi 3.0 and Gandhian principles and ideas to a group in Redding, California. We also had the wonderful privilege of having Lewis Elbinger--former U.S. diplomat to India and U.S. congressional candidate, discussing his "encounters with Gandhi". Below is the transcript of the evening. Welcome and good evening. It’s been an amazing few months, where I’ve had the chance to meet or talk with several of Gandhi’s grandchildren, travel to India to take part in a unique gathering called Gandhi 3.0 held near the Gandhi ashram, and to delve deeply into Gandhi’s life and message. I also think it’s so special, someone reminded me, that today is the 90th anniversary of Gandhi’s Salt March, which essentially launched the non-violent action campaign in India against British rule. And friends of mine with young folks are even tracing the steps ... Read Full Story

Mar 08, 2020, 3 smiles Last Saturday, we had the privilege of hosting Awakin Call with Ben McBride. Pastor Ben McBride is a national leader in police-community trust building, gun violence prevention, and training in equity, diversity and inclusion. In 2008, he relocated his family to an Oakland neighborhood called the “Kill Zone” to better understand and respond firsthand to the epidemic of gun violence. He helped re-launch Oakland’s Operation Ceasefire, a data-driven violence reduction strategy, which contributed heavily to a 50% reduction in homicides over five years. Ben’s work around police/community trust-building and gun violence prevention includes training more than 100 law enforcement departments & executives. He serves as the Co-Director of PICO California, a multi-racial inter-faith network that is the largest grassroots community organization in the state of California. Motivated by various prophetic traditions, PICO uses a relationship-based organizing model to build a Beloved Community/just society where everyone belongs. Below are some of the nuggets ... Read Full Story

Ben McBride: Building Peace In The Crosswalk Of

Mar 04, 2020 This week's Awakin Call guest: 'Ben McBride: Building Peace In The Crosswalk Of ConflictReflection questions: Our guest this week is a peace activist and spiritual leader who at times has been viewed by those within his community as too close to the police, while also viewed as too close to protesters by law enforcement. He asks difficult questions of both sides, saying "I hope to meet you in the crosswalk" of conflict. How do you get through difficult moments not by avoiding conflict but by being in the middle of it?

Oct 27, 2019, 6 smiles Last Saturday, we had the privilege of hosting Awakin Call with Victor Kazanjian. The Rev. Victor Kazanjian is the Executive Director of the United Religions Initiative (URI), a global grassroots interfaith peacebuilding network of more than 1,000 multifaith groups and one million volunteers working in over 100 countries to build bridges of cooperation between people of all beliefs and cultures. Defying the conventional wisdom that issues of poverty, conflict and violence are best engaged by organizations with a heavy central infrastructure, URI’s decentralized, network-based, light-framed, shared leadership, relational organizational approach is giving people around the world the power to meet their challenges and build cohesive, connected and peaceful communities. “Peace and justice begin at the grassroots,” Victor says. His deep childhood grounding in celebrating “one among many” has led Victor to deeply study, teach and embody Gandhian principles of pluralism and grassroots change. Below are some of the nuggets from the call ... Read Full Story

Oct 23, 2019, 3 smiles This week's Awakin Call guest: 'Victor Kazanjian: United Religions InitiativeReflection questions: Our guest this week believes that exclusivism -- or the belief that "my truth is the only truth" -- in either politics or religion has been arguably "the single greatest source of suffering throughout history." What practices allow you to open your heart and mind to other lived truths?

Gratitude Is My Wake-Up Call

Nov 23, 2018, 1 comments, 10 smiles [On behalf of the entire Euphrates ecosystem, I share gratitude for all of you in the ServiceSpace community. Your example and modeling of these universal values inspires in far more ways than you might imagine. Below is a note I just sent yesterday.] It’s raining today! The welcome drops from heaven are pitter-pattering on my roof as I listen in exultation. So grateful that the weather is finally ending the fire threat and washing the smoke from the air. It’s the first time it has rained since early October; before that, Spring. It’s hard not to blame “Climate Change.” Growing up my dad regaled me with stories of 1972, his first year in Redding when it rained every single day of November except for one day mid-month when it merely threatened to rain. How can one not feel disheartened that, instead of respite from a historic drought, California has been battling ... Read Full Story