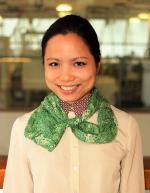 I'm joining Service Space because ... I have been attending Awakin Circles in London, joined a retreat with Nipun Mehta and served at a Karma Kitchen. I want to help this movement in more ways than simply showing up.

A good day to me is when ... I wake up feeling well and happy.

My hero in life is ...I don't really have a hero. There are many people I admire.

My favorite book is ...Gone with the wind for fiction and Big Magic for non fiction. Those are just the first that came to mind. I have enjoyed so many good books!

One thing I'm grateful for is ... My health, without which life would be very difficult. I am also grateful for the clarity of thought and the self-awareness I have.

How A Little Impulse Led To A Profound Awakening

Jun 04, 2020, 5 comments, 14 smiles Any story begins with an unexpected challenge that confronts a character with an urgent need to pay attention, to make a choice, a choice for which s/he is unprepared. The choice yields an outcome, and the outcome teaches a moral. The moral destroys the inner divided lens and brings forth an equanimous lens. This lens led me into creating pockets of service across Hanoi, Vietnam during the strange times of COVID. “Thuong nhau so gi Covid”, roughly translated as “when we care for one another we do not fear Covid”, is the phrase coined by the other girl who started this project with me. Although my partner and I did most of the frontline work with some help from my mom, I cannot forget to think about all the amazing people that I met along the way. I want to draw you all to my four part story that I captured in ... Read Full Story

On Being Offered Money By A ...

Aug 12, 2018, 2 comments, 14 smiles On being offered money by a busker at London Bridge... Now and then I would hear such beautiful music from buskers that I want to stop to enjoy like I would with a gig. I have told myself time and again to stop and make the time. But if I am at a station, I am rushing. So I only do it on a fraction of the occasions I feel an urge to. The most time I would spend is to give some money. Today I was late to meet a friend but after giving my contribution, I decided to stop and listen to this busker for a bit. He asked what I wanted him to play and I said something I could dance to. So I danced to his folk music with bags on my back and in my hand for about 5 minutes. After I said good-bye and turned away, he called me back: "Do you want your cut?". I did not get what he meant. Then he bent down to grab some coins and repeated "Your cut of the taking". "No, of course not, are you kidding?" I burst out. I was being offered music to dance to and he wanted to pay me. But of course I walked away with a smile. What a sweet man. Such a sweet encounter. I must make time to stop and appreciate life's beauty more often.

May 08, 2018, 3 comments, 13 smiles When Shamash told me that about a retreat with Nipun after our two-day conference in London, I did not imagine that we would host it. Our responsibility emerged about two weeks before the day, right as our own work for the conference was taking up every spare moment we had. It didn't seem possible that we could organise a "proper" Awakin Retreat the way we had seen it done, but we trusted that somehow things would work out. A gathering of this nature was always about flow and co-creation anyway (so we told ourselves). The theme: The first thing I did was to reach out to those I knew could help us "anchor" the event. Shamash himself did not even know what anchoring was, so we certainly needed help! One of these conversations led me to learn that we were having our event on Earth Day, the largest global environmental event. Bang, ... Read Full Story

Every Encounter Is An Opportunity To "Do The Work"

May 06, 2018, 8 smiles It was the third time Fatima came to clean my flat. It was a hot day and the door to my patio, which had been closed on previous occasions, was open. "I have swept the outside as well so that you could sit out there in the sun" I was touched. What a kind person she was. I had not even thought about asking her to do that. The previous time Fatima had told me about a difficult client who kept changing the booking last minute, for which Fatima had had to reschedule with me a few times. I had told her that she needed to put down firm booking rules. I also told her that she did not have to put up with the rudeness from this other lady. She had agreed with me but as it turned out, she could not say no to unreasonable demands from this person. Not because ... Read Full Story

For The Incredible Beauty Of Creation

Apr 23, 2018, 8 smiles [Beautiful meditation that we read in London, for our Earth Day retreat, by Pierre Pradervand] The incredible beauty of nature defies the wildest imagination. From the perfection of a tiny alpine flower no one will ever even see to the splendor of a star-studded summer’s night, through the intricate beauty of a seashell to the breathtaking harmony of a spider’s web, all this grandiose symphony has been laid out for our pure enjoyment. Mistress of the universe, we bless You for the incredible perfection and splendor of the spectacle You have created for our constant rejoicing. For the sheer miracle of a substance as mysterious and omnipresent as water to the rugged beauty of a mountain range, for the amazing functioning of living creatures and systems of all sorts that challenge our deepest knowledge to the constantly renewed abundance of Your goodness expressed in the produce of the earth ... Read Full Story

I Was At A Private Retreat ...

Aug 13, 2017, 14 smiles I was at a private retreat organised by friends over the weekend. It had been a rather overwhelming period of time for me, physically and emotionally. I arrived exhausted, admitting that I would not be able to bring my usual level of energy. The only thing possible for me was to sit back and receive. It was the first time I allowed myself to do so without guilt. Within just two hours, I started to find my energy again. On the second day, we attended Karma Kitchen in London, which I had helped a little bit with the planning. It was special experiencing this as a diner and knowing everything about the other side. I was filled with joy seeing the volunteers having a good time serving. And of course I was deeply grateful for all that I received over the course of the evening. The day after Karama Kitchen, and the last day of my retreat, there was no question in my mind about the importance of being able to receive from others in the unconditional way we try to give. Without receivers there can be no givers. And without receiving there's no recharge for more giving. As a fellow retreat participant said to me, by giving and receiving, you give other permission to do the same.