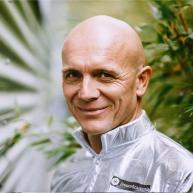 A good day to me is when ... Every day has the chance to be the best day of y our life

My hero in life is ...My heros in life are Nipun Mehta and the entire Service Space community

My favorite book is ...Kahlil Gibran The Prophet

One thing I'm grateful for is ... LIFE and all aspects of a fulfilled life

May 23, 2019, 4 comments, 25 smiles We are in the middle of a lot of exciting events in Vienna this week, with Nipun visiting us for a few days. Sophie and Alma's organized an Awakin Circle where they had to stop the registrations at their capacity of 70. :) Even after couple hours, there was this deep silence as the group started to feel like a whole organism bound in love. At the end, we took Valetin's circus prop and created a circle and sang a song: Helmut and Julia (who can't stop speaking about her recent Laddership Circle) hosted a Corporate Culture Jam with couple hundred corporate leaders, who were "mindblown" and elevated with an introduction to ServiceSpace's design principles. Karin, in her introduction, shared openly about the closing keynote: "We've spoken a lot about innovation and questioning status quo. But we haven't thought of challenging the notion of money itself. Can we innovate without money?" Yesterday, Kathrin ... Read Full Story

Nov 04, 2018, 4 comments, 18 smiles Last month, hours before our third Karma Kitchen in Austria, Hermann, Nipun and I crossed the border into Hungary. It is a must-visit place for everyone in ServiceSpace. Everyone knows about the demise of the Berlin Wall, but what most people don't know is the "friendship picnic" on the Austria-Hungary border on August 19, 1989 was the actual seed of that revolution. On that day in August, over 900 Germans in Hungary came together for a picnic on the Austrian border. Few gutsy ones among them decided to cross the border through the barbed wire, then a few more. An army man on a tower had authority to shoot, but he miraculously turned around and looked the other way. Soon hundreds crossed, creating a tidal wave across the continent. A few months later, the Berlin Wall fell -- almost overnight. The ultimate ripple effect, because of a few love warriors and one army ... Read Full Story