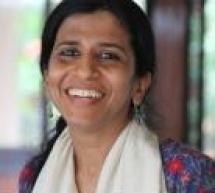 A good day to me is when ... I am able to do something for someone

My hero in life is ...Mother Teresa

My favorite book is ...As You Think

One thing I'm grateful for is ... The varied experiences of life

How We Love The People We Love

May 11, 2018, 2 comments, 20 smiles [During January's Gandhi 3.0 Retreat, Meghna hosted a special guest Awakin Circle, where Mandy Len Catron, Gary Zukav, Linda Francis, and Karma Lekshe spoke on "spiritual partnership". In 2015, Mandy authored a viral NY Times article on 'how to fall in love with anyone,' and she just published a book on the topic. Below are her insightful remarks on love. This was originally posted on Feb 13, 2018.] I am going to talk about spirituality and partnerships, and I am going to focus more on the partnership side of things and specifically on romantic relationships. But I'm hoping that what I'm going to talk about will extend in interesting ways into other kinds of love relationships that are not necessarily romantic. And hopefully that will resonate with what the other speakers are going to talk about tonight. As a little background, I grew up in rural Appalachia, Virginia, in the United States. ... Read Full Story

Feb 28, 2017, 2 comments, 18 smiles [Joseph-ji is one of the greatest inspirations of my life, and I'm amazed that a man without a bank account, without a mobile phone, without email still manages to arrive just in time (from the Himalayas, typically!) for sacred circles like our Gandhi 3.0 retreat. He rarely speaks about his teacher, so it was privilege to hear him share on Day 2 of our gathering. Below is a transcript to carry the inspiration forward.] Tao Te Ching says, “Therefore the Master acts without doing anything and teaches without saying anything. Things arise and she lets them come; things disappear and she lets them go. She has but doesn't possess, acts but doesn't expect. When her work is done, she forgets it. That is why it lasts forever.” I considered it to be the greatest blessing in my life was to come across my master. Because of him, I am who am I. My ... Read Full Story

Why Whales And Dolphins Don't Fight Back

Oct 19, 2016, 9 smiles Here is a beautiful article I came across and felt compelled to share it with you: Why Don't Whales and Dolphins Fight Back?  Some excerpts below ...    Each year in Taiji, Japan, the unthinkable happens: wild dolphins are rounded up, sold into captivity and killed. The international community has long known about the hunts and continues to rally for change. What remains unknown is why dolphins never fight back against their human tormentors. Exploring this question raises others. What causes captive orcas and belugas to show such restraint toward their captors? Why did the great whale nations rarely attack the hunters who lanced them by the millions? Why don’t dolphins and whales fight back? By virtue of their incredible sonar abilities, the dolphins clearly witness the deaths of their kin. Make no mistake: they hear the whistles of agony. They see who is doing the killing. They are aware. It is most astonishing, then, ... Read Full Story