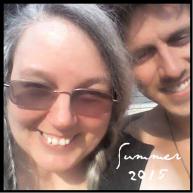 I'm joining Service Space because ... I believe my purpose in life is service through small, loving acts.

A good day to me is when ... I don't lose my mind with fear. https://under1000skies.org/missing-benjamin/

My favorite book is ...To Kill a Mockingbird

One thing I'm grateful for is ... My children.

Jul 14, 2018, 4 comments, 9 smiles Yesterday's "Inclusion" prompt was about "Celebrating the Pillars in Your Life." I wrote about a book I read years ago called Pillars of the Earth that told the story about people who worked on a beautiful cathedral that most would never in their lifetimes see finished. The paragraph and poem below is an excerpt from that post. I'm sharing it here too since the inspiration originally came from Service Space and an article by Nipun about Dada Vaswani. The older I get, the more connected i feel to those who have come before me. It's as though, in my youth, formed from the stream of all humanity, I, liquid, walked around in human form. I was still a part of the ever-flowing stream comprised of every creature with a soul that has ever been, is now, and ever will be. As I grew older, I collected debris and solidified, and this became ... Read Full Story

May 22, 2018, 4 comments, 12 smiles Gems 4.66 under1000skies I hope you’re having a beautiful day. ♡ Here’s another light-filled ¤ Gem ¤ Under an oak tree a young girl heard music, a promise yet to be. A chorus of songs, one by one, they came. She sang each song joyfully; Every song engraved deeply on her grateful heart for eternity. Niki Flow “There is a legend of a tribe in Africa where the birth date of a child is counted not from when they were born, nor even conceived but from the day that the child was a thought in its mother’s mind. When a woman decides that she will have a child, she goes off and sits under a tree, by herself, and listens until she can hear the song of the child that wants to come…” -Nipun Mehta, -Embrace the Grace, Celebrate the Infinite- ♡. under1000skies ☼ A “Giftivism” Initiative ☼ We are photographers, writers, artists & advocates serving and connecting homeless creatives.

♪ My Joyful One ♪

May 27, 2017, 4 comments, 11 smiles "Shield your joyful ones." —from an Anglican prayer On KindSpring a few days ago, a friend shared a beautiful poem by Thomas Lux called "Ode to the Joyful Ones." My son Benjamin has been missing since March 2, 2016. That is Benny with me in my profile photo and this is his NAMus.org case file page: Benjamin Morse Archer. The photo in my profile was taken in the summer before he disappeared, around July 2015. Today is Day 452 since he left. At first I pushed myself to find him in any way I could. I walked in the State Park where he disappeared, I wrote hundreds of letters, made dozens of calls, walked the streets handing out his flyer. Then my body collapsed. I got very sick. I almost gave up hope. I started coming back to KindSpring and ServiceSpace and reading little posts here and there. I started my (M-F) daily under1000skies ... Read Full Story

Nov 29, 2016, 1 comments, 3 smiles Greetings and love, dear Service Space Co-Creators! It has been nearly two years since I interviewed fellow Service Space member, Owusu-Fordjour Alexander, better known by his artist name “Ita Bobo" and wrote "The Earth Our Heart." Ita Bobo - Recent News Ita Bobo is a musician in Ghana, a health and hygiene officer for the Ghana government and the Director of an NGO called Earth Replenishers Foundation.   Ita Bobo now has a television show in collaboration with the Mohtv and for the Ministry of Health to teach hygiene, nutrition and sanitation to the people of Ghana.  Ita Bobo also teaches the schoolchildren of Accra. Dancing, Singing - Best Teaching Tools Ita Bobo creates curriculum, music, dance and games to teach the children of Accra about the importance of hygiene, nutrition and sanitation and how the lack of all three can lead to disease.  The children not only learn very quickly this way, but they retain ... Read Full Story

Mar 09, 2016, 3 comments, 7 smiles Update: Missing Son | March 8, 2016 (part 2): The police informed me around 2PM on March 8th that since Ben was seen by a witness (whom they interviewed) and since he appeared to be of sound mind and in good health this is no longer a police matter but a family matter. He suggested I continue putting up flyers which I will do. Thank you for your continued prayers and good thoughts. I believe Ben needs them. All updates will be kept here from now and only shared if there is news. under1000skies | Update March 9: No news Joe and brother Ben

Holding My Son In Your Prayers

Mar 06, 2016, 6 comments Gems Photographer (My Son) In Danger | under1000skies My son Benjamin Archer, one of our contributing artists, has been missing since Wednesday March 2nd.Â  He was last seen around noon at Dupont State Park in Delaware.Â  He has no ID and no warm clothing.Â  The local and state police are on top of things and everyone has been very kind and extre...

Feb 16, 2016, 6 comments, 14 smiles My cup is overflowing. I just got off the Laddership call, a weaving the first three Laddership groups hosted by Nicole and Zilong. It was so good to reconnect. I'm writing because this is where we share stories! {{{Birju}}} These are stories we need. I had a beautiful tapestry of events today. I listened to Mike Dooley's Awakin Call finally and then did some reading about Gift Economy. My question to Zilong was, "I published a book. I am gifting 50 percent -- my 50 percent. The other 50 percent is going to my husband, my patron of the arts. But with that half we're paying for bills and debt, so should I say 100 percent?" Love Not Fear As everyone shared thoughts and experiences with this I realized that I asked that question out of FEAR. It was like -- "If I only give 50 percent, then I'm not a true Gift Economist. ... Read Full Story