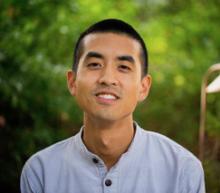 I'm joining Service Space because ... I believe we are interconnected

A good day to me is when ... I practice kindness and gratitude from the heart

My hero in life is ...My sister

My favorite book is ...The Kite Runner

One thing I'm grateful for is ... Awakin circles

Who Is Gandhi Today?

Dec 27, 2019, 4 comments, 13 smiles In the midst of this holiday season, I am energized and inspired by the Awakin Teens! Last Saturday, volunteers, parents and teens gathered at the Berkeley Buddhist Monastery (BBM) for a day of spreading kindness and practicing generosity in community. Brother Jin Wei, Jane, Vishesh, and I walked the streets of downtown Berkeley with ten Awakin Teens, young love warriors carrying big smiles on their faces and positive signs like “Free Hugs” and “You Are Loved!” in their hands. With each person or group we met, we shared hand-written holiday cards, home-baked vegan cookies made by Sandy, improvised songs, engaging conversation, and lots of hugs. Along the way, we connected with folks from all streams of life – people experiencing homelessness, street musicians, students, teachers, families with kids, people working and shopping at the Farmer’s Market, BBM friends who know Brother Jin Wei, BART station employees, as well as officers and inmates ... Read Full Story

A Handful Of Nails And Heart Full Of Love

Sep 10, 2019, 3 comments, 14 smiles Vishesh and I, along with our friends Jane and Angela, recently had the opportunity to join brother Pancho in Tijuana at a shelter serving a growing community of over 250 refugees, who continue to arrive from Central America to await asylum or have already been detained and released. Across our many shared moments there, including yoga with the children and cooking with the mothers, I was deeply moved by the love and resilience of the families we met despite the inhumane treatment they received from the U.S. immigration system and the trauma of all they have gone through leaving home. All over the news these days, we find stories of the very real suffering and adversity facing immigrants and refugees, whether it’s family separations, deportations, or mass shootings. These stories keep us informed, but they often leave us drained, pointing us to the hatred, fear, and hopelessness of the world today. ... Read Full Story

Walking One Step At A Time With Sahil

Oct 05, 2015, 5 comments, 23 smiles I just arrived home to Bhutan after my first trip to India. I spent almost a month volunteering at Manav Sadhna, a true family of servant ladders and children who live and love from their hearts. To “soak in the ecosystem” as Madhu-bhai so nicely put it, I also sat Awakin circles at Neil-bhai’s apartment in Ahmedabad and the Urban Ashram in Pune, attended a Moved By Love “Head, Heart, and Hands” retreat at ESI Sughad, and visited a dear friend’s village 2 hours from Pune. “Doing” all of these things in no way captures the subtle shifts that I felt throughout my time though. As I reflect back on the month, the phrase “small is beautiful,” the theme of our MBL retreat, resonates deeply with me and seems to embody my experience. Although there are countless stories of kindness that touched me, I want to share a few small ... Read Full Story

May 09, 2015, 5 comments, 15 smiles In the last 8 months I’ve been in Thimphu, Bhutan, I’ve been a part of hosting a local Awakin circle. Our circle is held in the simple, but beautiful library of Madam Deki Choden’s primary school, the Early Learning Centre (ELC). Upon entering the school, one notices that the atmosphere is remarkably welcoming and comforting. Surrounded by the presence of children’s books and inspiring messages, we feel immediately as though we are home. The space is an extension of the community that comes together every week – a group of remarkably caring people, from all walks of life. And here in Thimphu, we’ve had a diverse community of local school-going youth, educators, healers, musicians, artists, poets, environmentalists, activists, working professionals, international volunteers, and more, each with his or her own unique story to tell. Week in and week out, we’ve shared hearty laughter, heartfelt tears, and vulnerable moments with one another, ... Read Full Story

Education Is GNH: Learning To Nurture Our Hearts

Jan 28, 2015, 20 comments, 11 smiles In 1972, the small Himalayan Kingdom of Bhutan adopted the philosophy of Gross National Happiness (GNH), a holistic approach to development that moves beyond GDP and takes into account shared prosperity, environmental sustainability, cultural preservation, and other factors that are essential to human well-being. And while I cannot speak to the manifestation of Gross National Happiness as the complex policy tool or index that it is in the government’s eyes today, I can speak about my lessons on GNH at a more simple, human level – in the heart-felt and empowering education of young people in Bhutan. Last month, I volunteered as a founding facilitator for Camp Rural-Urban Friendship (RUF), a 10-day camp that brought together over 100 youth from rural Dagana in southern Bhutan and Bhutan’s capital city Thimphu in cooperation, co-learning, and co-creation, all aligned with the motto “where we educate our hearts.” When I first met Tenzin Dorji, ... Read Full Story

Snapshots Of Kindness From Bhutan

Oct 08, 2014, 3 comments, 12 smiles Last month, I arrived in Bhutan, a Himalayan Kingdom perhaps most known for Gross National Happiness, for the third time in 3 years to work full time in education here. In my time back, I’ve been touched by the generosity of friends, colleagues, (host) family, and strangers, and I have also had the opportunity to be a part of a few kindness ripples! Here are a few short stories of compassion-in-action here in Bhutan: 1. ​When I was on a nature walk with 3 kids in my extended host family, Sonam, the cute little girl in this photo with me, was picking a small bouquet of pink wild flowers for me. When I showed her and the other girls a smile card, they decided to gift the beautiful flowers to a neighbor who runs a local shop that benefits their entire village. We left the flowers at the shop’s doorstep and the ... Read Full Story

My Friendship With Juanita

May 18, 2014, 2 comments, 9 smiles [At Nipun's request, I'm posting a short story on gratitude that I had shared during an Awakin Circle two weeks back.] Last year at my university dormitory’s dining hall, I met Juanita, an elderly chef's assistant who immigrated from Mexico nearly a decade ago. When I saw her during lunch and dinner, she was so kind and sweet - always working so hard behind the scenes to prepare our food with love and cleaning up. Everyday, I spent some time thanking her for everything she did for us, and she would always offer up a big smile and thank you back. One day about 3 weeks into knowing her and saying thank you to her, I came back a bit late for lunch after class and I noticed that Juanita was eating lunch alone. All the other students had left at this point. I asked her if I could eat lunch ... Read Full Story

"You Are Therefore I Am": Free Compliments At Stanford

Jun 05, 2013, 6 comments, 18 smiles This past weekend, at the ServiceSpace retreat community night, I commented on how nice Bhoutik's shirt (which says "You are therefore I am" on it) was. He immediately, without a second of thinking, took off the shirt and gifted it to me out of pure love. I was so honored because I knew he really valued that shirt, and it was amazing to see how he was so nonattached to it and just wanted to give. I wanted to pay it forward in the same way that he did, to give with what I had. Serendipitously, Audrey sent me an email after the retreat about two guys at Purdue University who give free compliments, and with that, I was inspired. I knew that by giving compliments I could spread some love right before finals week here at Stanford. Today, my good friend Kareem and I (as you can see from the ... Read Full Story

The Intelligence Of The Heart

Jan 24, 2012, 2 comments, 3 smiles According to author Howard Martin, "The heart sends out 40 to 60 times more electrical impulses than the brain. It doesn’t just pump blood; it plays a role in controlling emotions, secreting hormones. For thousands of years, people have written about the heart as having intelligence – maybe they were right." Our hearts have 40,000 neurons for a reason. Perhaps following its rhythm may guide us in making wiser decisions in our day-to-day lives and choosing more compassionate responses to the global challenges that we face today.