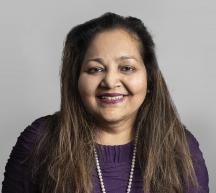 I'm joining Service Space because ... I am inspired by the community of compassion, and service through inner transformation

A good day to me is when ... I have become aware of and peeled away another barrier to love

My hero in life is ...Gandhi and MLK Jr. and Justice Ruth Bader Ginsburg

My favorite book is ...so many - but maybe "Karma Yoga" by Vivekananda & "Small is Beautiful" by EF Schumacher

One thing I'm grateful for is ... Becoming conscious

Dec 12, 2020, 1 comments, 1 smiles Last Saturday, we had the privilege of hosting Awakin Call with Antoinette Klatzky. When Antoinette Klatzky took a part-time job as a recent college graduate in a retail clothing store, she might not have imagined one day working with the iconic fashion designer, Eileen Fisher, to set strategy for Fisher’s foundation on human rights and climate justice. Nor might she have envisioned that her work with Fisher would lead her to help prepare changemakers around the globe for broader awareness-based systems change. But that’s what Klatzky has done. As the Executive Director of the Eileen Fisher Leadership Institute, she facilitates empowerment workshops for young women – having previously helped diversify the company’s supply chain for social justice. And as a co-creator with the Presencing Institute, led by Otto Scharmer of MIT, she co-anchors a worldwide community of nearly 13,000 participants engaging in shared inquiry: how can we be of transformational service ... Read Full Story

Dec 02, 2020, 1 comments, 1 smiles This week's Awakin Call guest: 'Antoinette Klatzky: Feminine Voice From The Emerging FutureReflection questions: What practices allow you to sense the emerging future? What is the role of embodiment and feminine energy in presencing what is wanting to be born in you?

Oct 28, 2020, 1 comments, 2 smiles This week's Awakin Call guest: 'Rebecca Henderson: Reimagining Capitalism And Business As Usual In A World On FireReflection questions: What are the walls of the systemic box in which you operate? How do you climb out of the box of "business as usual" to reimagine possibilities in a world on fire? What internal resources do you draw upon?

Mentor And Friend For 25+ Years. May RBG Rest In Peace.

Sep 23, 2020, 2 comments, 14 smiles [Below is a post that I had shared on FB, about my cherished relationship with RBG, and I was asked to post it here on ServiceSpace as well, the feed for my beloved community.] We didn't hit it off right away. When she was a judge on the DC circuit, she interviewed me during my second year of law school in 1988 for a clerkship -- and rejected me, following a somewhat awkward interview all around.* I went on to clerk for Hon. James L. Oakes, Chief Judge of the US Court of Appeals for the Second Circuit, and then US Supreme Court Justice John Paul Stevens. There were almost no Indian Americans in the law or in public service on the national scene at the time (most started coming to age about 5-10 years later), and I didn't have a language for my experiences or a peer group of contemporaries ... Read Full Story

Sep 10, 2020, 1 comments, 8 smiles Our dear friend, powerful meditation teacher, fellow ServiceSpace volunteer and favorite comedienne/actress Stephanie Nash will be offering a free 12-week live class via Insight Timer. The platform is just now moving to live classes and they asked a small number of teachers to offer something. So, beginning Sept 16, she will be offering “Well-Being in Challenging TImes” every Wednesday morning at 9AM Pacific Time for 30 minutes -- for 12 weeks. It’s totally free, and all are welcome to join at any time for any part of it. Some topics she’ll cover are: creating ease, laughter, eating, movement, deeper mindfulness, etc. Stephanie says: "this is the course I wanted to offer when Covid hit, but I didn’t have a platform to reach as many people, so when Insight Timer offered (with their 17 million users -- and 600,000 daily visits to the homepage where it will be listed), it seemed like the perfect opportunity." And what a great opportunity for all of us, her current and future fans!

Aug 09, 2020, 2 smiles We recently had the privilege of hosting an Awakin Call with Bill Drayton. A leading pioneer in service of humanity on a global scale, Bill Drayton is the lever behind social entrepreneurship, having coined the term in 1972. He is the founder and CEO of Ashoka, a network he created to support, connect, and build up social entrepreneurs and their ideas. Many of the most innovative social entrepreneurs of our time have received support through Ashoka, which is now active in more than 90 countries supporting the work of over 3,600 Fellows. Drayton’s vision of social entrepreneurship received global recognition when Ashoka fellow Mohammed Yunus was awarded the Nobel Peace Prize in 2006 for launching microfinance to support the world's poor. The seed of the pragmatic idealism that drives Drayton was planted on his trip to India in 1963 when he met Vinoba Bhave, the spiritual successor to Gandhi who led ... Read Full Story

Jul 28, 2020, 2 smiles This week's Awakin Call guest: 'Bill Drayton: Ashoka's Legacy: Everyone A ChangemakerReflection questions: Our guest believes that entrenched systems shift when ordinary individuals within them embrace their changemaker identities. How have small individual changes in awareness and action within you helped affect larger transformations of the systems around you?

Jul 11, 2020 Last Saturday, we had the privilege of hosting Awakin Call with Rob Hopkins. Rob Hopkins is a cofounder of Transition Town Totnes (England), the first Transition Town in the world, and the Transition Network, a movement by communities in 50 countries to address the big challenges they face by starting local. Transition Towns are reclaiming the economy, sparking entrepreneurship, re-imagining work, re-skilling themselves and weaving webs of connection and support. In 2012, Rob was voted one of the Independent’s top 100 environmentalists. An Ashoka Fellow who holds a doctorate degree and has received two honorary doctorates, Rob is author of several books including The Transition Handbook (2008) and From What Is to What If (2019), where he asks why true creative, positive thinking is in decline. In his earlier life, Rob spent 2.5 years in a Buddhist monastery and set up the first 2 year full-time permaculture course in the world. Below ... Read Full Story

Jul 02, 2020, 5 smiles The following is based on the July 8th, 2017 Awakin Call with Thom Bond. Thom Bond brings 27 years of study and training experience in human potential to his work as a writer, speaker and workshop leader. His passion and knowledge of Nonviolent Communication (NVC) combine to create a practical, understandable, humorous, and potentially profound approach for learning and integrating skills that help us experience more compassion and understanding. Thom is a founder and the Director of Education for The New York Center for Nonviolent Communication. He is best known as the creator and leader of The Compassion Course, a comprehensive online NVC-based training, Since 2011, more than 14,000 participants in over 110 countries have learned to communicate compassionately through this year-long course. As a Massive Open Online Course (MOOC), it is now offered in four languages, funded entirely through donations. The course continues to grow at near-geometric ... Read Full Story

Rob Hopkins: Transitioning And Transforming Our

Jul 01, 2020 This week's Awakin Call guest: 'Rob Hopkins: Transitioning And Transforming Our CommunitiesReflection questions: Our guest this week believes that we are stuck in ruts that don’t work or meet most peoples’ needs because we have lost the ability to imagine that there might be life beyond those ruts, rather than embracing the possibilities that these times have to offer. How might you move from "what is" to "what if" in one area of your life?