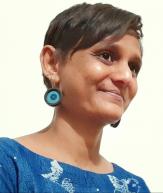 I'm joining Service Space because ... I'm exploring this new world of service and I would like to connect with the people and learn.

A good day to me is when ... I'm surrounded by friends, music, food and laughter!

My hero in life is ...Krishna

My favorite book is ...Tuesdays With Morrie by Mitch Albom

One thing I'm grateful for is ... Nature

"Kindness Will Be All We Can Leave Behind"

Feb 01, 2020, 1 comments, 17 smiles Whether humanity will consciously follow the law of love, I do not know. But that need not disturb me. The law will work just as the law of gravitation works whether we accept it or not. Bhakti, a love warrior, stared her journey with these little bundles of masti gang three years ago by tutoring them with some basic principles of English and Science. While explaining them the law of gravitation, she also started sharing the law of kindness and the multiplicity of its ripples. Some time ago she heard the story of Shakkuben, who we fondly call Pencil Amma, and was deeply touched by her simple yet profound way of service. Bhakti gathered all the kids and shared her story with them and to honour amma's service journey they all started collecting old pencils. But, that wasn't enough for them! They added paper mache to the pencils as an extension to ... Read Full Story

Aug 12, 2019, 3 comments, 14 smiles She danced into the room, the sunlight danced across the water, the words danced on the page. Historically, dance has been used to rid the poisons of body, both mental and physical. Physician Carl Hammerschlag, describing his time among the indigenous peoples of the American South West, recounts that the second question he was asked by a Pueblo elder, following “Where did you learn how to heal?” was “Do you know how to dance?” He is then told, “You must be able to dance if you are to heal people.” Dance is sense-making. Lamothe said, “As long as humans walk the earth, dancing remains the practice by which humans acquire the eco-kinetic knowledge needed in order to participate consciously in creating a culture that honours, abides by, and upholds the movement of the earth in and around us. Last month the theme for HeArt circle was body awareness through dance movement. Roots ... Read Full Story

Mar 25, 2018, 10 comments, 26 smiles [Below is Milan Rai's lucid share during our recent 'Gandhi 3.0' retreat -- about his journey in learning, losing, and loving. His White Butterflies have inspired hope and joy in the little things, across 42 (and counting) countries. :)] Namaste everyone. I'd you like to stand because from here it looks like this is the setting of an orchestra. So I feel like I'm a conductor. :) Each one of you I imagine as different notes melodies -- some resounding with hope, some resounding with dreams, some resounding with so many different, deep beautiful emotions. So let's start a symphony. I would like to share my journey from my teenage days till now. In the eighth grade, I failed in all the subjects, and my teacher told me, "You are a very hopeless kid; very poor in math." I told him, "If you upgrade me to class 9, I'll fail in nine subjects. That's ... Read Full Story

Apr 04, 2017, 2 comments, 14 smiles This afternoon I had luch at Arundada’s. Post lunch after I finished washing the dishes, Arundada asked me if need a napkin to wipe my hands. I replied with a smile(wiping my hands on the skirt that I was wearing) its ok, I’m wearing a napkin. This reminded Arundada of a few incidents. These are simple stories with deep message hence I felt like sharing with you all. Story #1 Once Arundada was at an ashram in Budhol, Karnataka, India. The swamiji at the ashram who according to Arundada was swamiji in true sense. He wasn’t just well-versed in Veds and Upnishads but also completely hands-on. He participated in most of the chores of the Ashram. Arundada wanted to sit with him and have a conversation, so swamiji brought a mat for Arundada to sit on. Arundada said “How can I sit on the mat when you will be sitting on the ... Read Full Story

Mar 11, 2017, 3 comments, 13 smiles Conversations with Arundada (March 7, 2017) Arundada : On hearing of Kinnari giving birth to a baby girl, I am reminded of this song Song 1 : Kinnar Gandharva devtaao ki baat nahi Maanav se maanav ka mukt milan chaahiye (Translation : We are not talking about divinity, religion, gods or angels. All that is needed is that a human can meet his brethren without any barriers) Chinta ki baat nahi saadhak ke paas agar aarti samet sugandh pooja ka thaal na ho Chinta ki baat nahi vandana ke geet na ho, chinta ki baat nahi sumano ke mala na ho Devta bhi apna pratibimb jahan dekh sake, saadhak ki anjali mein ashru suman chaahiye Manav se manav ka mukt milan chaahiye (Translation : A true seeker does not need to be equipped with incense or other ritual offerings for his prayers No cause for worry, if the seeker does not have flowers or even a prayer to offer What is needed are ... Read Full Story

On Laddership: Service Without Marks

Mar 07, 2017, 1 comments, 23 smiles [Below is a transcript of Audrey's talk on Laddership, on Day 3 of the Gandhi 3.0 retreat. I know I speak on behalf of so many when I say that we're grateful that Audrey not only speaks eloquently about this topic, but also embodies this style of leadership from moment to moment, across so many projects. Thank you, Audrey!] When I read the quote, “Be a ladder, not a leader”, I’m reminded of a reflection I read few months back. It was offered by a monk, from the days when he was a young man volunteering at a monastery during the time of a big event. The day before, everyone was fully preparing for the event. Morning to evening. At the monastery, the days start at 4AM and end around 10PM. After such a long day, this young man was very tired and looking forward to sleeping. Just then, as they were walking ... Read Full Story

Jun 10, 2015, 2 comments, 14 smiles In the third week of the internship we met for reflections. Spontaneously some of the interns suggested it would be great for all of us to travel together out of Vadodara and get engaged with some local community. It was amazing to see the interns were not passive recipients but active designers of the internship programme. After some research and phone calls it was decided that we could go to Kedi which is a residential school for girls of remote tribal villages in and around Dharampur. We spent two and a half days in the school/hostel with the girls and the next day Aparna-ben, arranged for us to visit the homes of few of these girls, meet their families, spend some time with them and earning about their ways of life. It was an incredible experience to visit Amisha, Priyanka, and Neeta's village and family we visited. Aparna-ben also suggested we make ... Read Full Story

May 17, 2015, 3 comments, 14 smiles Swara asked me that - few 19-20 year olds are interested in doing an internship. Do we do it? I jumped up and said Let’s Do It! Not knowing what I was signing up for, would open up such a learning space for me. These 17 business and law students joined us. We introduced ourselves as a bunch of volunteers and introduced the principles with which we would work. Six of us joined in this process as ‘buddies’ and started designing the programme. After few iterations around the design we nailed it down to – ‘values’ that we would work through this one month. We came down to 12 values out of which we had to come down to 7-8 values that we could work through. While we would serve the journey of the interns we were keen to be a part of this journey ourselves. Great texts and conversations formed ... Read Full Story