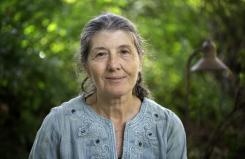 A good day to me is when ... I have been able to connect with someone at a heart level & be of service.

My hero in life is ...all the regular Joe's and Jane's who are trying to make a difference however, wherever, whenever they can.

My favorite book is ...To Kill a Mockingbird

One thing I'm grateful for is ... my family.

Nov 06, 2019, 5 smiles Last Saturday, we had the privilege of hosting Awakin Call with Shelly Ehler. Shelly Ehler may be best known for her successful appearance on Shark Tank, but her lesser-known story of turning failure on its head is one of inner transformation. Shelly appeared on ABC's reality TV show in 2012, in which an entrepreneur seeks an investment from five venture capitalists who happily call themselves "sharks." Shelly is the only entrepreneur in the show's 11 seasons to have left with a check in her hand for her creation. Having lost her home from the recession, Shelly viewed her success as nothing short of a miracle. But nothing quite worked out. The business deal fell through and she never received the investment. But following the show’s airing, Shelly heard from thousands of people that she’d given them reason to believe in themselves. As she began reexamining her story, she saw that her ... Read Full Story

Oct 30, 2019 This week's Awakin Call guest: 'Shelly Ehler: A New Look At FailureReflection questions: How has seeming "failure" catalyzed you to weave a new story of self and service?

Oct 01, 2019, 1 comments, 6 smiles Last Saturday, we had the privilege of hosting Awakin Call with Diana Beresford-Kroeger. Diana Beresford-Kroeger is a world-recognized botanist, medical biochemist and author (and now filmmaker). She is known for her extraordinary ability to translate scientific complexities of nature for the general public with both precision and poetry. “If you speak for the trees, you speak for all of nature,” says Beresford-Kroeger, one of the world's leading expert on trees. She has studied the environmental, medicinal, and even spiritual aspects of trees, has written about them in leading books, and maintains gardens on her property that burst with flora. From a very young age, she understood she was the last voice to bring Celtic knowledge to the New World. Orphaned at age 11 in Ireland, she lived with elders who taught her the ways of the Celtic triad of mind, body and soul, all rooted in a vision of nature that ... Read Full Story

Diana Beresford-Kroeger: The Call Of The Trees

Sep 25, 2019, 2 smiles This week's Awakin Call guest: 'Diana Beresford-Kroeger: The Call Of The TreesReflection questions: What is your relationship to trees to and to the global forest? Are there particular trees with which you connect and draw strength?

Aug 10, 2019, 3 smiles Last Saturday, we had the privilege of hosting Awakin Call with Sister Marilyn Lacey. Sister Marilyn Lacey is the founder and director of Mercy Beyond Borders, a non-profit that partners with displaced women and children overseas to alleviate their poverty. For 25 years, she has worked with refugees in the U.S., Africa, and Southeast Asia, and spent time in war-ravaged places, including the Lao-Thai border, Sudanese and Somali camps in Kenya, and with internally displaced persons in the Eastern Equatorial region of Sudan. She has dedicated her life to making the world a more welcoming place for persons forced to leave their homelands because of war or persecution. In 2001, Lacey was honored by the Dalai Lama as an "Unsung Hero of Compassion” for her life of service with refugees. “I didn’t set out to be a leader,” Sister Marilyn says. “I just saw what needed doing and I did it. ... Read Full Story

Aug 07, 2019 This week's Awakin Call guest: 'Sister Marilyn Lacey: Mercy Beyond BordersReflection questions: Can you recall a time when you felt moved to enter into relationships beyond borders? What kinds of walls/borders did you transcend?

Jun 01, 2019, 5 smiles I had the pleasure had the pleasure and profound privilege of hosting Saturday's Awakin Call with Lee Mun Wah, beautifully moderated by Birju Pandya. Lee Mun Wah is an internationally renowned Chinese American documentary filmmaker, author, poet, educator, community therapist and master diversity trainer. He has created several renowned films, including The Color of Fear and Walking Each Other Home, about racism; Last Chance for Eden, on sexism and racism; and If These Halls Could Talk, a dialogue among college students about race, racism and diversity in higher education. In 1995, Oprah Winfrey did a one-hour special on Lee Mun Wah’s life and work. The base of Lee Mun Wah’s body of work is his lived experience. He faced his father's own racism when his mother was shot five times and killed by a young black man. A promising young black man in one of his films brutally lost his ... Read Full Story

May 29, 2019, 2 smiles This week's Awakin Call guest: 'Lee Mun Wah: The Color Of FearReflection questions: What accommodations have you made, or else implicitly or explicitly expected others to make, to fit into the dominant culture? How have you reached beyond or transcended difference?

May 11, 2019, 3 comments, 9 smiles Saturday, I had the joy and privilege of hosting the Awakin Call with Ashima Goyal with Christ Johnnidis moderating and Pavi Mehta livestreaming. Ashima Goyal is an "ordinary" heroine who channels her talents and wide-ranging training to serve extra-ordinarily in small and large ways. A writer, an editor, a socio-emotional learning educator, an artist, a community-builder (and visionary behind Romania's first Karma Kitchen), a cook, food blogger, and a spirited volunteer, her service has spanned from online space-holding, to hands-on direct disaster aid in grassroots villages after serious floods. As an engineer, and later as a social policy graduate, Ashima had the idea to change the world. "Luckily," she says, "I came in contact with people who helped me see that all I can do is change myself." For the past 7 years, all her work has been towards transforming her environment by first transforming herself through small acts of service. ... Read Full Story

Ashima Goyal: Bloom Where You Are Planted

May 08, 2019, 10 smiles This week's Awakin Call guest: 'Ashima Goyal: Bloom Where You Are PlantedReflection questions: What is the difference between pursuing inspiration versus "blooming where you are planted"? Can you recall a time when you have discovered incredible value right in front of you, when you didn't see it before? To what extent do you draw inspiration from further distances, and to what extent do you simply nurture what's in front of you?