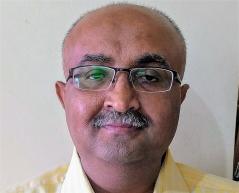 My favorite book is ...Ramana Maharshi

One thing I'm grateful for is ... My family.

Aug 11, 2017, 2 comments, 23 smiles When I landed in Rajkot a few days ago, after couple years of recovering from illness, I realized the emergence that had taken place here. So many deep ties, so many friends and well wishers. What started as a space for individual cultivation slowly emerged and metamorphed into a beautiful Awakin community. Today, there are more than 15 people attending Awakin's regularly and bringing change in their own ways. I was reminded of a story of a friend who sent us cherry tomatoes all the way from Udaipur. The friend thought it was some kind of dry sweet so gave it to us after a week. When we opened the box it was stinking with rotting tomatoes. My mom thought instead of throwing it away, why not offer it to the plants so it can compost faster. Little did we know that after a couple of weeks some seeds would make it and literally grow into a new plant. Long story short, We harvested as many as 30 cherry tomatoes last month. We never saw what was emerging and their is a beauty in the way nature allows for everything to prosper and nurture it till it finds its right place in the world.

Why Don't You Do Something?

Nov 05, 2014, 17 smiles Once a farmer asked Buddha: "Why don’t you do something good? " He continued, "See, I cultivate the land, I create something; but you simply sit under the tree with closed eyes, doing nothing. I have been watching you. People come to you, you talk to them or sometimes they sit silently by your side. Why don’t you do something creative?" This simpleton farmer was naturally curious; he had been watching Buddha sitting under a tree just by the side of his farm, with people coming, going, and no visible work happening. Buddha said, "Can't you see that I am also a farmer? Sure, my farm is of a different quality, on a different plane, but I sow the seeds and helps the crops grow. The people who come around and sit silently, or to whom I sometimes talk -- they are my work. I am sowing seeds in people’s consciousness, and when ... Read Full Story

Philanthropy Of A Beggar

Mar 17, 2014, 5 comments, 12 smiles [It's great to see Times of India cover a story like this, and spread the idea of learning generosity from those who have the least.] It is difficult to believe that a beggar can do this. Yet it is true. For the third year in succession, Khimji Prajapati has donated a large part of alms collected by him to buy uniforms for a dozen poor girl students of Government Primary School II in Mehsana. He spent a major portion of his savings of Rs 3,000 collected while begging to buy these uniforms. "I know the pain of these children," he said when asked about his gift to the poor children. It was a sight on Monday as shabby looking Prajapati limped through the school gates on crutches to give away the school uniforms to the poorest of the children, six of whom come from Muslim families, four are orphans and two are children ... Read Full Story

Nov 17, 2013, 7 comments, 29 smiles We've had the pleasure of having Her Extra-Audrirariness (Audrey Lin) with us over the last few days, and she has been spreading smiles and cheer everywhere she goes. Recently, few people felt they couldn't meditate daily because their house was too small but then they saw Audrey's example of just quietly meditating in a corner at regular intervals -- and that changed them. In Navi Mumbai, she created a quite revolution with art on the walls, small tags around the clock, and happy smiles to everyone she met. And yes, below is proof about her talk to student council leaders at a college in Pune today (speaking about 21-day Kindness Challenge) -- where lots of kindness ripples are on the way. :)

Why I Don’t Want To Be A Thought Leader

Oct 06, 2013, 1 comments, 9 smiles I have been keenly following, reading and understanding management leaders worldwide and as you get deeper and deeper into it, there are some fascinating insights that come forth. I am not writing to deride anyone or undermine their capacity to shake the world. I deeply respect their intellect and their capacity to create paradigms that we always thought didn’t exist earlier. This is just what my mind thinks of the concept of Thought Leader. As we understand the word in greater detail, we realize that more we get carried away by the concepts thrown to us the more we lose a part of ourselves. And I am trying to understand why? As I started observing myself and completely looking at the world around me objectively, things started becoming clearer and I started getting a sense of a deeper meaning of what this is all about. There are several questions that came to ... Read Full Story

Amitabh Speaks At Yes, I Am The Change

Oct 03, 2013, 3 comments, 21 smiles We just finished our Yes, I am the Change event -- and although Madhu insists on downplaying it, :) I think its a somewhat big deal that his labor of love (and the work of filmmakers for social change) was able to inspire one of the world's premiere celebrities to voluntarily lend his support for the message of using media for social change.  Below is the photo of the event's two super stars (Amitabh Bachchan and Madhu), and our whole back-end team, all of whom ultimately encouraged many young filmmakers to bring out positive stories in the world.  More soon! :)

Jul 11, 2013, 1 comments, 13 smiles Today about a dozen of us had a very heart warming house warming gathering at Aabha's place -- whom we first met at the Giftivism retreat last year, and the ties have just gotten deeper and deeper. We started with a beautiful opening ceremony, followed by half an hour of silence. Then we had an Awakin style circle of sharing which was opening with Vivekananda's "Secret of work" reading.  Aabha is keen to host Awakin gatherings in her new home, so stay tuned for more. :)

Mar 18, 2013, 9 comments, 23 smiles Sometimes running into an old photo from the past can bring us fresh gratitude for today.  Madhu and Meghna are tireless forces that amplify the small voices of goodness, whether it is through films or photos or stories or retreats or those seemingly inconsequential conversations that end up being so transformative.  I can say for sure that meeting them has changed the direction of my life, and I know that's true of many others.  Thank you, M&M!  Below is an old  photo of them pre-Reva, when they were featured in a cover story of India Today magazine -- which is also great blackmail material. :)

Feb 07, 2013, 6 smiles It was to be a brief meeting, with some government leaders who oversee the education of several hundred thousand students.  Most people come to them with agenda, and don't get much time -- but as things flowed, Nipun-bhai and I spontaneously did a whole presentation, as all their leaders were called in.  The whole vibe in the room was amazing.  We spoke about ServiceSpace mission, values and constraints, and inspiring social change voluntarily (with minimal coercion).  From ideation to implementation, we charted out some beautiful possibilities.  At one point, they spoke about finances, and when we spoke about practicing gift-economy through this process itself, one of the women in charge had goosebumps (that she showed us): "I have a lump in my throat." By the end of the meeting, one of the leaders was sharing Urdu poetry with us and another hugged us while telling us, "Thank you.  I have ... Read Full Story