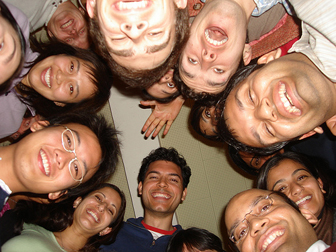 ServiceSpace started with four volunteers in April 1999, in the heart of the Silicon Valley. Initially, we build websites for other nonprofits. Thousands of NGOs were served for free. Soon, it grew into web portals for good news, kindness, and beyond. Many offline projects organically unfolded. Twenty years later, ServiceSpace has at least 600 thousand members and reaches millions of people every month. It has given wings to pro-social values and offered innovative designs to increase the circulation of those values in today's culture.

Every second, 2 inspiring emails are sent out. It adds up to about 70 million emails years, through our many portals like DailyGood. All emails have been advertising-free for the last 20 years.

Every hour, 14 thousand people interact with our content archives that include articles, podcasts and videos. This often leads to thriving online communities, like KindSpring, which is an ecosystem of kindness.

Every week, hundreds will meet Awakin Circles in 90+ cities around the globe. People meditate in silence for an hour, then listen to each other via a circle of sharing, and then share a meal together.

Every week, we host a global conversation with change-makers, where hundreds of luminaries have spoken about the significance of their inner transformation in creating external impact in the world.

Every month, 5 thousand people will join ServiceSpace. In total, 600 thousand members from 171 countries are actively registered with us, but the actual count would be much higher.

Every month, we produce and ship labor-of-love "Wisdom Crafts" (like Smile Cards) around the world -- without a price tag. To date, about 100 thousand orders have been fulfilled through our network of volunteers.

Every quarter, we host six-week "Laddership Circles" for entrepreneurs who want to apply ServiceSpace ideas in their projects. Several hundred alumni have incorporated these values (like "multiple forms of capital" and "priceless pricing") into their lives and work.

Every year, we host several dozen retreats in various parts of the world. In India alone, we have hosted 100+ residential retreats whose participants have ranged from everyday heroes to celebrities, billionaires, and even a Nobel Laureate.

Over the last decade, ServiceSpace has popularized many "giftivism" memes and values. For example, Karma Kitchen -- a pop-up gift-economy restaurant -- has been held in 23 countries, with hundreds of thousands having a "gift economy" dining experience. As a subject of immense press coverage, and various research papers including a seminal study at UC Berkeley, the ideas have rippled to millions of people and are now baked into many prominent project designs far beyond the ServiceSpace ecosystem.

Perhaps the most significant data point is that all of this is done without any fundraising, advertising, or pitches for media coverage or speaking engagements. In that sense, it has become a living testimony to the power of service, gratitude and our fundamental propensity to respond to love with greater love. That is perhaps the greatest contribution of ServiceSpace.

Leading with Relationships and On Laddership are two in-depth interviews that articulate the nuances of the ServiceSpace ecosystem.