If we added up the individual billable hours, the net value might've been in the 7 digits. One woman's family ran a grocery store that employed 50 thousand people, another participant had sold more than a million books, another had given away millions of dollars, another had implemented national policy in the country. In this circle, though, no one referenced that kind of doing. The GDP counter didn't go up at all -- and still, the evening landed into an elated and energized space that felt undoubtedly priceless. As one of the participants noted, "I'm feeling deeply grateful not just to listen to the individual notes, but to the silence in between the notes that is creating this remarkable, collective melody."

Rahul and Birju were holding space for a circle on conscious leadership at the intersection of business and values, with about 40 people cozily circled up in a loft of Teance Tea Shop that was gifted by Yadollah. Even before rich content started surfacing, Nina Horne, former city commissioner of Oakland, shared a teary-eyed opening: "Thank you for the most deeply felt sense of sangha that I've ever experienced." Victoria Kisyombe, the first woman to bring micro-finance to Tanzania, spoke about reaching out to other women to “make things possible” -- which was particularly poignant given that her daughter later offered heartfelt gratitude for her mother. Carolyn Gable, a single-mom of seven who went from being a beautician to becoming a waitress to running a multi-million dollar business, spoke about the importance of facing fear. One of her practices of giving back is to anonymously give strangers 100 dollar bills with a note that simply says, "believe" -- like a tip she once received. 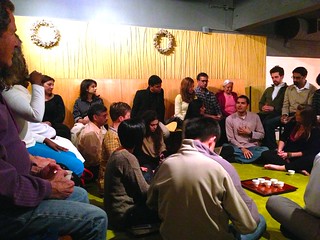 As the circle of sharing proceeded, the values kept revealing themselves. "When my son's company was bought by Google, everyone applauded -- but he applauded when the first user of his smart spoon wrote him a letter saying it was the first time in 20 years that he was able to feed himself soup," Saroj Pathak said. Tom Mahon eloquently shared his "Be Calm, Be Kind" message prefaced by a powerful experience of compassion:

"In the ICU, I could not move my limbs, sit up or lift my head from the pillow. I could turn my head, though, and I saw a row of broken bodies in the ICU, like mine. And suddenly I felt flooded in a warm light binding all of us broken people; it was a flow of compassion shared by all of us (compassion originally meant to suffer with). It was as if we were all bathing in an ocean of infinite mercy. The feeling lasted for maybe a half hour, and at least for now I can still recall it to mind."


Similarly, Ferose, who had 5 thousand staff by the age of 36, spoke about leveraging his influence to be more inclusive -- particularly for those on the autism spectrum. His organizing principle of life: Everyone is Good at Something 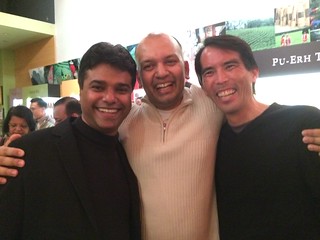 Miranda spoke about hope and faith in humanity. At a company she founded, Icestone, employees gave up company-paid cell-phones so shop floor workers could have health insurance. Post Hurricane Sandy, their warehouses with over $6M in equipment was flooded in 5 feet of water -- without any flood insurance. "Game over," the CEO announced. Those same employees, however, refused to throw in the towel; they rolled up their sleeves and the company is still going today.

Deepak Goel spoke about his experiments of "management by generosity,” when he was in a top-tier position at a very big company and his peers believed in "management by fear". He'd buy ice-cream for everyone on Saturdays, he voluntarily took a small office, he would do anonymous acts of kindness. "We have a lot of people in our company that commuted daily, and I had told the security guard that anyone can use my car and driver to be dropped off to the station -- anytime. Pretty soon, it became the buzz of the company and one time, I came down and my watchman confidently told me: 'Oh, I just gave out your car to someone who needed it.' For him, my car was like his car, that he could give away anytime -- and I felt so good hearing that. In the end, if you manage by fear, people may respect your chair, but if you manage by generosity, people will give you their love."

Alissa Hauser used the example of a trash-pick-up app that could shift our consciousness from me to we. Pavi Mehta, author of Infinite Vision, spoke about Dr. V's journey to marrying the practical with the profound, to ultimately recognize our blindness. Pamela spoke about the role of improv in her leadership, and stressing the importance of accepting everything. Zilong -- who biked from Massachusetts to California, while reading the Koran, Bible, and Moby Dick to broaden his world view -- shared how, "the biggest impact I’ve had at work is cutting apples for my colleagues…I feel like that is my work and the other is my job…I’m grateful to see the many micro-ways that I can weave in my work even in a job that is not particularly designed to be the work.” As Kahlil Gibran would say, "Work is love made visible." 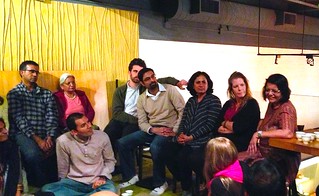 A successful business woman from South Africa was so inspired by the circle, especially when she asked Audrey for some paper and Audrey gifted her a brand new leather-bound notebook. She vowed to return to her business in South Africa “to encourage more diversity, more focus on disabilities ... I’m in an influential position…but I need to give back ... because I do have the voice loud enough to tell the emperor that he is naked, and I’m going to go back and do it.”

Towards the end of the circle, Gary Zukav spoke. Having been on Oprah more than 30 times, his books have helped bridge the barrier between science and spirituality, and he couldn't contain his joy: "I am so delighted to be here. I invite you please email me anything about what you shared tonight, because two and half minutes, two hours with each of you is not enough -- two days is not enough.  You all represent that transition from a dynamic that produces goods and services in order to generate profit into a dynamic that offers goods and services that are made possible by profit. The intention has been reversed, which is the central aspect of our evolution." In a touching tribute to "be the change you wish to see," he went on to share how he likes to reach unreachable people: “And in my life, I have found that the most unreachable person I have ever met is I.” 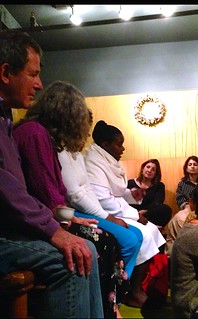 Like all good circles, the intention isn't to arrive at an answer, but to learn how to hold questions collectively. "My weekends are slated for family, but yet, I'm here. How do we determine the right balance?" "Can our imbalance help re-balance the larger ecosystem? Gandhi couldn't serve his family but he ended up changing the world." "What are you willing to give up that's not in alignment?" "How can we hold a sense of urgency for the world, while still retaining hope?" "Can we apply the logic of efficiency with machines, but effectiveness with human beings?"

Rather poetically, Janet was one of the last people to share in the circle. Sitting next to her mom Victoria, she recollected, “I’m emotional because I didn’t know I’m going to come here and learn so much from all of you. Coming back to my mother, to tell the truth I don’t tell her thank you or appreciate her or tell her I’m proud of you…we take things for granted. Sometimes just look back and sit back and give thanks for your life instead of taking each moment for granted,” she said, moving her mom to tears.