Three years back, Arun Dada shared his experience of fourteen years of satyagraha against the biggest slaughterhouse in Mumbai, which has the capacity to slaughter 10,000 cattle at a time. Every fifteen days, he used to travel from Bhavnagar to Mumbai, which is 599 km. Tools that they used to protest were non-violence, compassion, and love.

Interestingly, Dada also shared about his relationship with a butcher who used to speak very abusively. Dada called him one day and asked, do you believe in God? He said yes. Dada further asked him, how many times do you remember him in a day? He said not much as these days I am quite busy. So dada gave him a task; he asked him to put a mental tally mark in his mind every time he used an abusive word and the number of times he remembered God in a day. With all his gentleness, Dada told him to report the count at the end of the day.

At the end of the first day, he came to dada and said he could keep the count for only an hour, which is really a very tough job. Dada said not to worry and keep doing the work. This went on for three days, and on the last day, the butcher came to him and said, I am bad with keeping the counts, but I am seeing the difference that is coming in the ratio of my use of abusive words and the number of times I remember God.

Personally, I got confused about how Dada can show so much compassion to the person who is part of the movement for which Dada has been working for fourteen long years. He shared that the nonviolent protest was against the system and not against any person. So Dada tried to see the goodness in him and others and started establishing that bond and deep friendship.

His dedication and persistence for fourteen years and his relationship with the butcher moved me deeply. While I was leaving Dada's home, I decided to become a vegetarian. I did not tell him as I wasn't sure if I was consciously taking this decision or feeling emotional. After two days, I went to him after checking multiple times with myself and shared my decision. Dada held my hand firmly as if giving me a handshake, with a big smile. 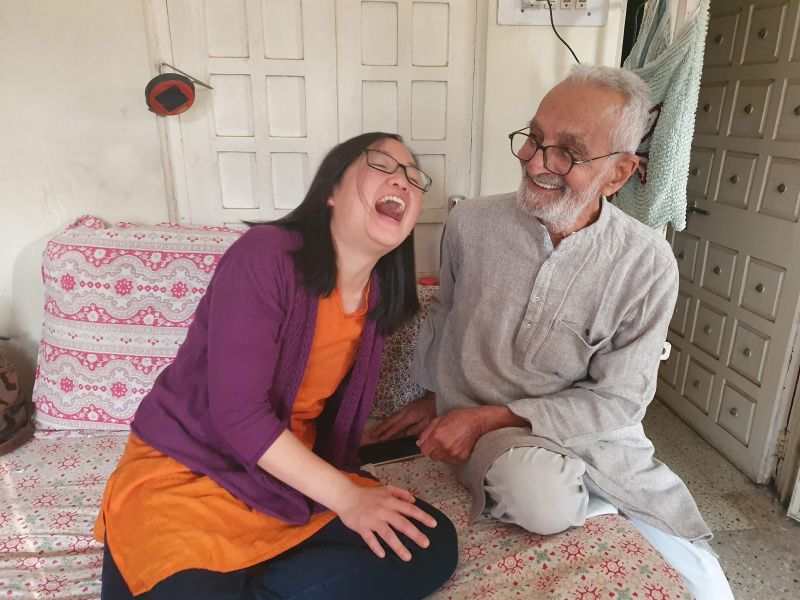 He had no intention to change me; he did not even know that I was a non-vegetarian but what got transformed is I feel his years of cultivation :-)

p.s- Could not resist attaching this beautiful picture of two gentle souls with amazinnnnggg smiles:))