... As narrated by Arun dada when he had met Nanabhai in Bhavnagar.

Shri Nrusinhprasad Kalidas Bhatt (Nanabhai Bhatt) was the founder of Gram Dakshinamurti and Lokbharti an educational experiment started in 1930 that went on to become an important point in the history of Indian education. 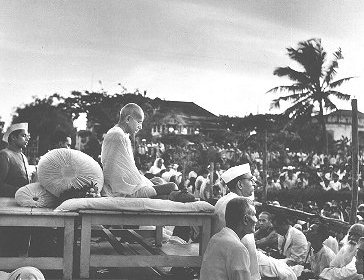 Nanabhai was inspired by Gandhi and so in 1930’s when India was suffering from both caste divide and British rule, against the wish of his spiritual teacher and of upper caste parents, Nanabhai gave admission to children of untouchables in his residential hostel.

Nanabhai however had some differences with Gandhi on his ideas of value based education (nai talim). So, he once went to meet Gandhi to discuss this.

He noticed that before after ending a sentence instead of a full point Gandhi would utter the word of God (Ram). While Gandhi was externally in a conversation, internally he was in a constant state of prayer.

After being a witness to that moment Nanabhai’s doubts dissolved, never to come back.