Vinobaji once said, “If I get another birth, I will want to be born as a farm-labor and not a land owner. I would spend my time in the lap of nature cultivating and dissolve the sense of ownership.”


Arun dada shared a couple of Vinoba stories. Vinoba did not mention re-birth. However, he would say that there will not be a gap between his going and coming. He would say, "I am going to be here with all of you. I might not take birth in the human form, but I will be living with all of you in the form of inspiration. I will be present with all of you till you are liberated. I alone do not want liberation."

With a graceful smile, Arun dada shared that Vinoba taught us how to live and how to die.

Most people who served us during our pilgrimage were farmers. They are close to nature, work hard, eat simple meals, and live an unadorned lifestyle. All that we ate was not bought from the market but was pure labor. Every grain had a human touch to it. Every meal was a reflection of their generous heart despite significantly less material wealth. In the true sense, what nurtured our bodies was their hard work.

We asked a farmer how it feels to work so hard and sometimes not get a good harvest? How does it feel? He said, "we do our job and then take a back seat. We have to surrender to nature as we have the least control over other factors."

Some interesting encounters we had with our farmer friends:

Self-sufficiency :-)
We were walking in the tribal belt, and we were fed food from their fields and were hosted in homes they made using local material sourced from the forest. They baked their bricks, cut wood, and used mud and cow dung to smoothen their floors. I remember Swara saying how it would feel to build your own home with your own hands. Imagine having higher education, access to technology, and whatnot; how many people do we employ when building a house, money included. 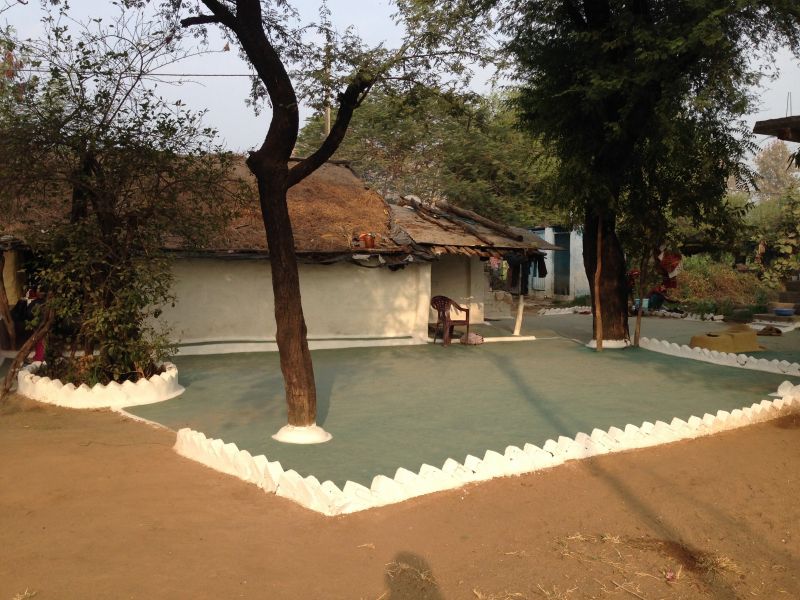 When we asked our host family how much time it took to build one home, he gave a classic reply, "more the number of hands, less the time." We asked if they make any sketch or structure on paper first before the real construction begins; his expression was like, not at all. It is all in the head. In the remotest area, they are the architects of their own homes with perfect angles and straight lines. When we asked them how they learned, they said we learned it by observing our elders and locals from the community. 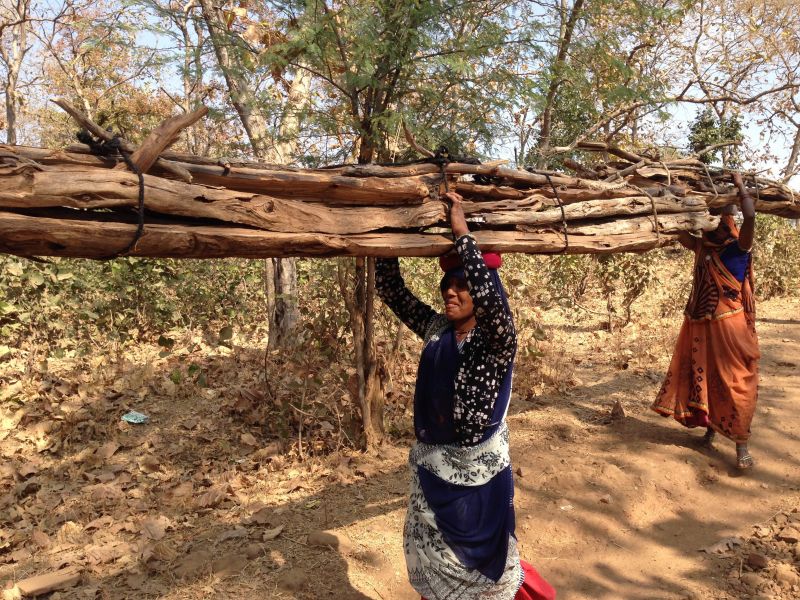 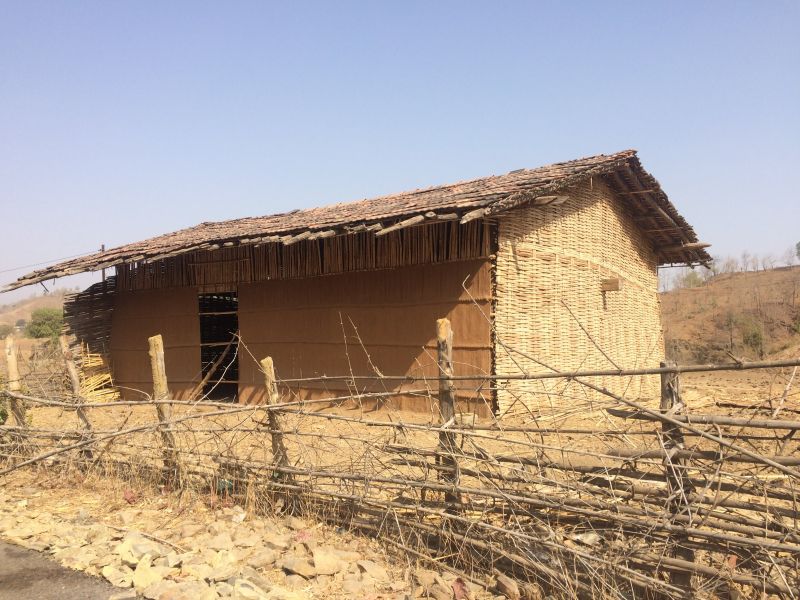 Did someone teach them about consumerism :-)
A farmer friend shared that all the food that they eat is homegrown. Except for salt and kerosene, there is nothing that they buy from the market. They consume only what grows on their farm, and if they need anything else, they would barter it with their farmer friends and depend very little on the market. 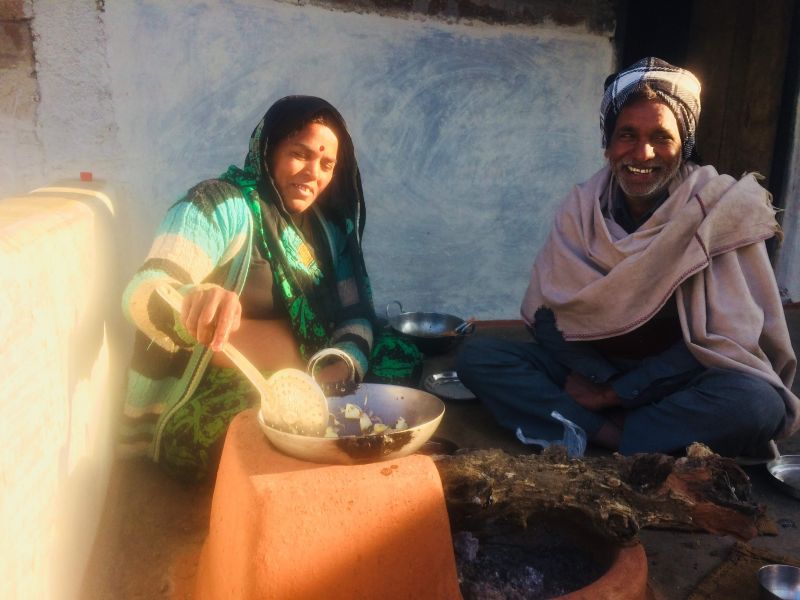 Physicist farmer :-)
One evening while we were walking our last leg, we wanted to make sure we would reach our destination before sunset. We asked a farmer walking behind us. He looked at the Sun, then he looked at our feet, and then he again looked at the Sun. He did this for a few seconds as if making some mental calculations. He then said, 'the Sun will set by the time you reach that village, but it won’t be dark.' His accuracy blew our minds; when we reached our destination, the Sun was down, but the light was still in the sky. Swara shared with a sense of astonishment that he used the formula of speed and distance. And it’s the first time that she realized that the sky is lit even after sunset. 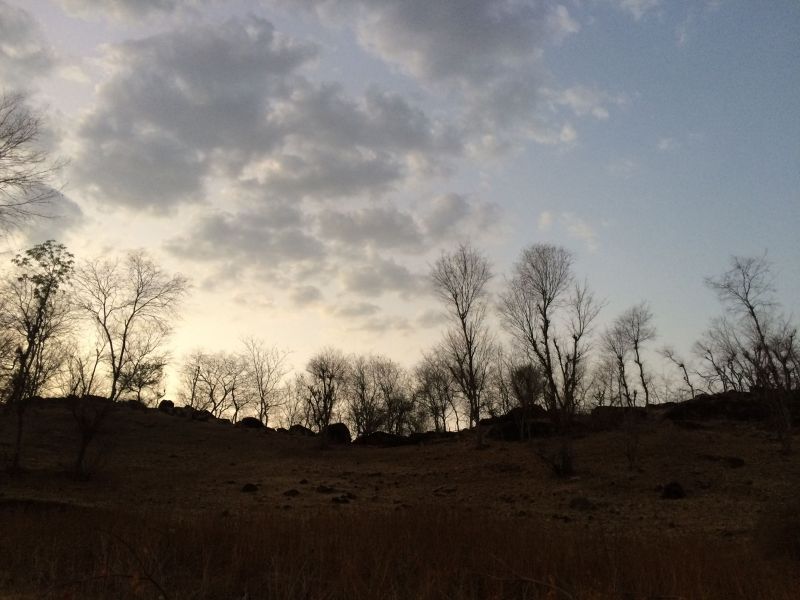 One evening we got stuck in a village because of the rains. We asked a farmer if we will be able to cross the hill before the sunsets. He looked at the sky for some time and said that there was a hail storm somewhere close by and we should stay and leave the next morning. We asked how he could tell that, and he pointed at the pink patch in the sky, which was an indication of hail. The next day when we walked 20 kilometers, the villagers said that there was a hail storm last night.

If not farming, then Yoga :-)
We asked a farmer while walking the tribal belt if farming was too much work. He said it is a lot of work, but he is fine doing it. We asked him if he had an option what he would do other than farming; he laughed and said he would be doing yoga if it was not farming.

We happened to walk with another farmer couple for a stretch of 5 - 8 kilometers across farms and on the muddy bund to stop water from flowing out of the farms. It was their regular route, and there is no transport. Sometimes you might find a tractor, but they prefer to walk as that keeps them healthy, and sitting makes them feel lazy.

Compassion quotient :-)
When the sun was at its peak, one summer afternoon, a farmer walking to his farm met us. He was concerned and asked many questions about our safety. Once he was convinced that we were doing okay, he told us to sit under the neem tree. He went into his field, which was half a kilometer away, and got fresh watermelon for us. He treated us with the sweetest melon, which was our lunch for the day.

As we were heading for the next village, he pumped up our energy with his inspiring words and gave all the money that he had in his pocket, which was partially torn. When we refused to take it, he just disagreed. Swara received the money, added some more, and then convinced him to serve other pilgrims walking behind us. 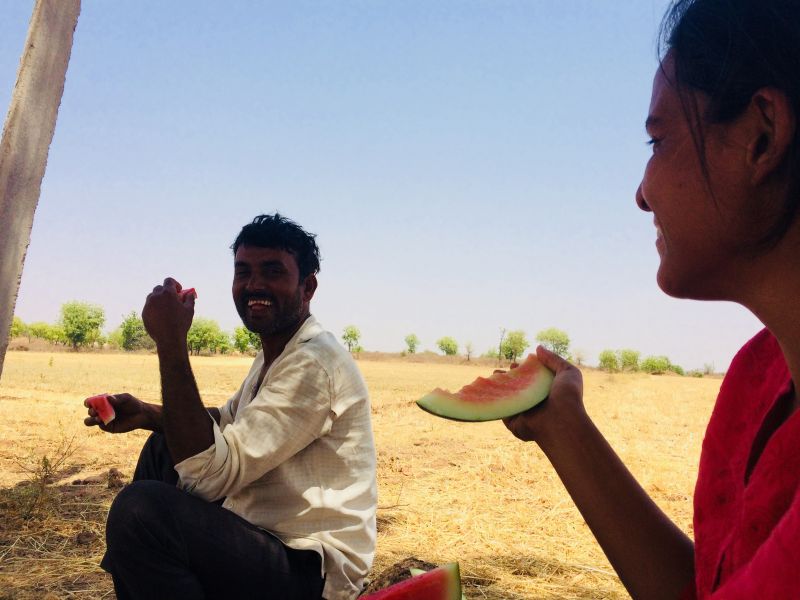 The stories of them serving us are endless. I am reminded of the quote by Thich Nhat Hanh, and I share my gratitude for the thousand hands that touch our food, including the earthworm, birds, sky, soil, before we eat it each day.

From the bowing journals, I remember a letter by Rev. Heng Sure that said true cultivators have no Sunday; each day, each moment is an opportunity to cultivate:)