During our last visit to Brahma Vidhya mandir, Pavnar I remember having a conversation with Usha tai around ego and relationships. To expand on the idea she shared about one of the practices that they follow in the ashram, Sarvanumati i.e consent of all. Which meant from the smallest to bigger decisions all were made only after each and everyone in the ashram comes to the consensus. There are thirty of them living in the ashram for many years practising the same principle.

She explained further with an example saying, “If I want to conduct a workshop at the ashram, the proposal will be put across everyone in a meeting. If everyone agrees to it, I will go ahead. But if there is even one person who is not willing to have that workshop, the event will be kept on standby. Unlike the majority where 51% wins against 49% which happens in a democracy. 49% is equivalent to zero. But in the case of Sarvanumati even if 99% of people agree to one thing, 1% view is equally taken into consideration because each one matters."

We asked her how do you feel when your project or something that you really want to do is kept on standby or is told no?
She very gracefully answered asking us, “what matters more “my project” or my love for the other person who is saying a no? Yes, to some extent my ego will feel bad because there is an “I” associated with “my project” but if I am able to extend my boundaries of love for the other person the “I” really doesn’t matter.”

Here is a small note by Vinoba ji that I found on ways and means to bring consensus and the difference between Sarvanumati and Sarva sammati. 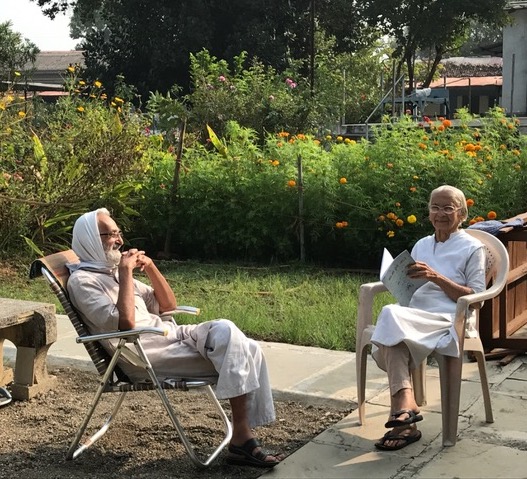 On that note, Sheela tai in a different conversation said something equally powerful. She said no matters what happens but don’t break someone's heart. It is a very sacred place and it reminded me of a poem by Rumi which says:

Circle the Kaaba of the heart
If you possess a heart.

The heart is the true Kaaba,
The other is just a stone.
God enjoined the ritual
Of circling the formal Kaaba
As a way for you to find a heart.
But if your feet walk
Around the Kaaba a thousand times,
And yet you injure a heart,
Do you expect to be accepted?

Just thinking how would the world be if we looked at each heart as Kaaba, as a place of pilgrimage:)