Kanti Patel, world-renowned Gandhian sculptor, passed away today. He is most known for the bronze statue of Gandhi in Union Square, New York -- but his spirit touched so many of us.

"Do you fear death?" Jayeshbhai once asked him. And his response was, "Death is my noble friend." Then, he quoted Sankaracharya:

More than 70 years back, Kanti Dada spent few days with Gandhi-ji and made a live sketch of him. As he was working on the sketch, Gandhi-ji was holding a meeting in Wardha ashram with national leaders, and Kanti-Dada muttered that presence of so many people was disturbing him. Knowing Kanti Dada's Gujarati origin, Gandhi penalized him 2 annas (a dime) for using the English word "disturb". :) Kanti Dada's first gypsum sculpture was of Gandhi. Since then, he made more than 800 sculptures, planted all across the world. For his service to art, he received Padhma Shree Award (highest honor by the Indian government). Just a few months back, he gifted that sketch (he drew of Gandhi-ji) to Jayeshbhai. 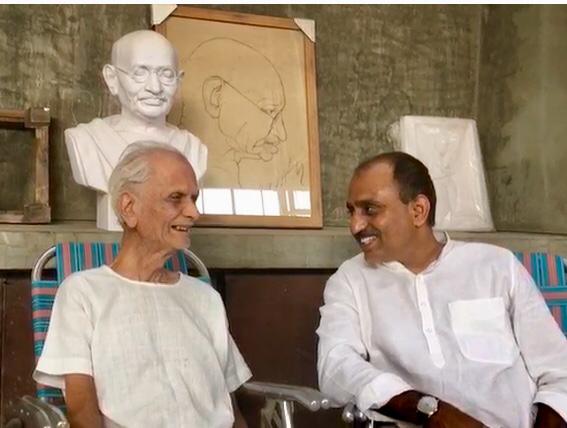 During his pilgrimage, Nipun-bhai asked him, "Do you meditate?" With a sagely yet innocent look, he says, "Yes, I love to meditate. I sit in silence 30-40 minutes every day. But whenever you meditate, you have already made a compartment about what is non-meditation. Meditation has to be a constant stream for 24 hours. The real test of meditation is how you handle your life situations. If you have preferences, and you cannot accept life as it comes, you aren't meditating."

Then Kanti-Dada describes a time when he traveled all the way to New York, only to be denied entry. He sat there for almost 18 hours at the airport, in the same spot. Eventually, he had to return back to India. Turns out, it was an error on their part. "Whatever the case, you have to have the ability to be still, to be able to tell yourself to sit down and be quiet," he added.

Anandamayi Ma, a famous India saint with millions of followers, comes to Kanti-Dada's house to find that 'quiet'. "Whenever I need peace, I will come here," she would say. There's nothing special about the place, except that it is Kanti-Dada's lab. Every piece is an act of worship, an expression of his soul.

Today, when we went to pay our respects, in that very lab, the remarkable simplicity and clarity was evident in the physical and spiritual spheres of presence: 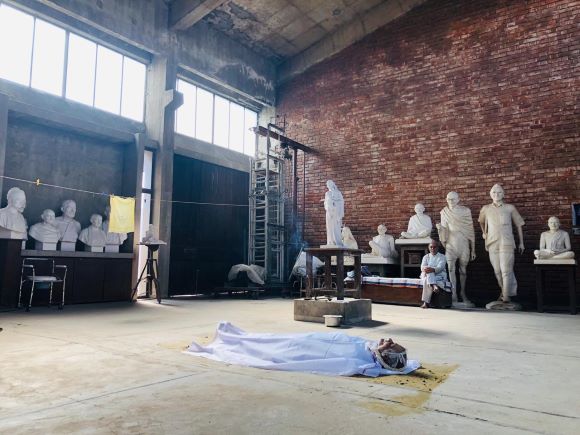 Although he says he was tempted once, none of his work bears his name. He never left a signature on any of his art, including the one that still stands in Manhattan's Union Square!

He has no benefactors. Everything, every single thing, he owns will be donated. Just a few months back, at the age of 94, Kanti Dada called Jayesh-bhai to donate his very last possession -- in the true Gandhian spirit of Trusteeship.

Kanti Dada came empty-handed, and left empty-handed. All through his life, he evolved consistently towards dissolving the ego, detached yet full of life.

Once, he was asked, "Dada when do you know the sculpture is complete?" Without skipping a beat, he responded, "When I feel it is not made by me".

Everyone who has visited him will remember this "chikoo wadi" outside his home, where it felt like the trees were also singing an ode to his selflessness. 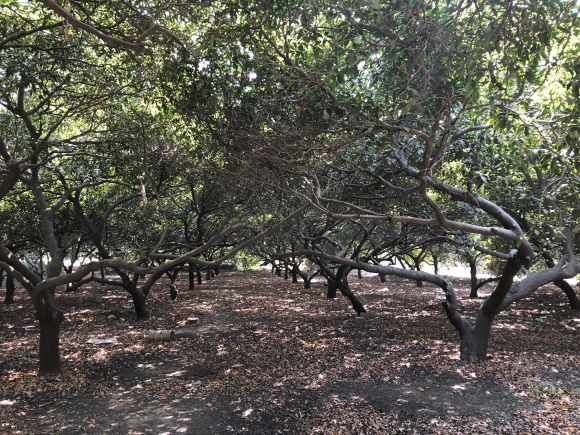 His favorite song captured in this interview goes something like this: "We came crying crying, we go laughing laughing [...] game, game game. Life is a game".

A tireless stream of love, devotion and simplicity, he left laughing -- paving the path for us to walk on.