After a specially powerful opening of the Santa Clara Awakin circle with a new sister sharing her journey of being held by strangers, we listened to each other in the circle of sharing. As usual, there were other newcomers, two of whom were visiting all the way from China, Zilong's parents. When it was her turn to share, Zilong's mother said that she feels the warmth of everyone's shared stories and has a lot to say, but with a hesitancy over her English, she will simply appreciate the warmth and smiles. The lady sitting next to her immediately volunteered to translate from Chinese to English, so she could share fluently in Chinese. What are the odds that these two just happened to be sitting next to each other, to be able to spontaneously connect?

At the end of dinner, Zilong's mother said to me that she understood my share had something to do with dance, as I indeed had talked about my two year old neighbor who has no shame in being held as we dance new moves together, till he is comfortable to do them without being held. She expressed that someday she would like to dance with me. Several people had already left, so there was actually enough space in the room. I held her hand and said why wait for someday when we can dance right now, right here. As we twirled around, Harishda came and said she was ready for her turn to dance with the visitor. As they ended their dance, she called out to Guri to take a twirl. And spontaneously, a few others came to join, and within a minute or two, all the women were holding hands and dancing in a circle. The men witnessed this organically emerging embodied connection and someone managed to take a photo. 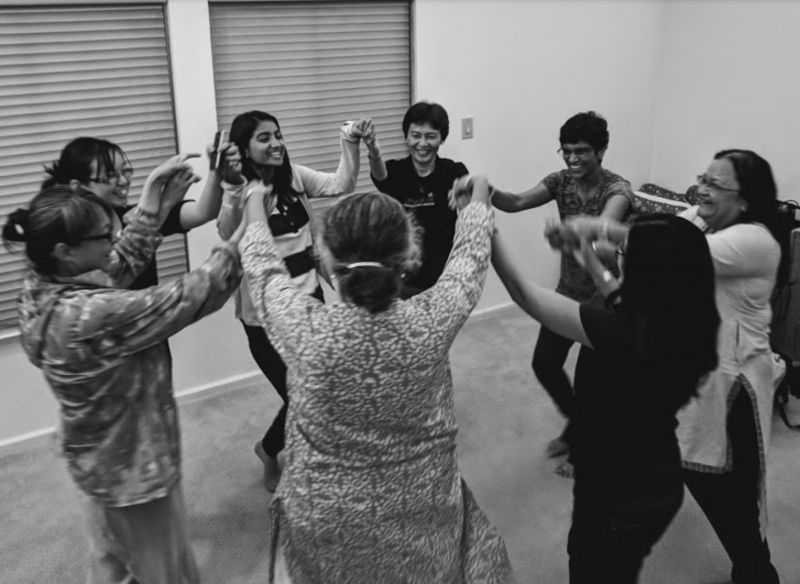 Dance helped us connect beyond the language, culture, age, ethnicity and all other barriers that we can't name, but carry with us. The sister who opened the circle smiled beautifully. We all left feeling we were held. As Harshida had said: sometimes we hold the circle and sometimes the circle holds us. Athithi devo bhaav - the Sanskrit saying says - the visitor is a blessing. It took Zilong's mother to visit all the way from China to set this magical moment in motion.

Jan 19: Haider ali on 'Peter Kalmus: How I Cut Fossil Fuels And Increased My Joy': "Thank you because you have been willing to...

Jan 19: get more info on 'Yoo-Mi Lee: ServiceSpace Coordinator Extraordinaire': "This is a great post. I like this topic.This...

Jan 19: hotel p on 'Three Peace Fleece Stories': "You know your projects stand out of the herd....

Jan 19: find more on 'Changing the Story with Kindness': "this is really nice to read..informative post...

Jan 19: click here on 'Art at Kindness Temple': "This is such a great resource that you are...