Last weekend, inspired by the magic in London, we made a GenerosiTREE with acts of kindness ideas on post-its. There were 4 categories like the SMILE deck - for yourself, for friends and family, for strangers and for the Earth. 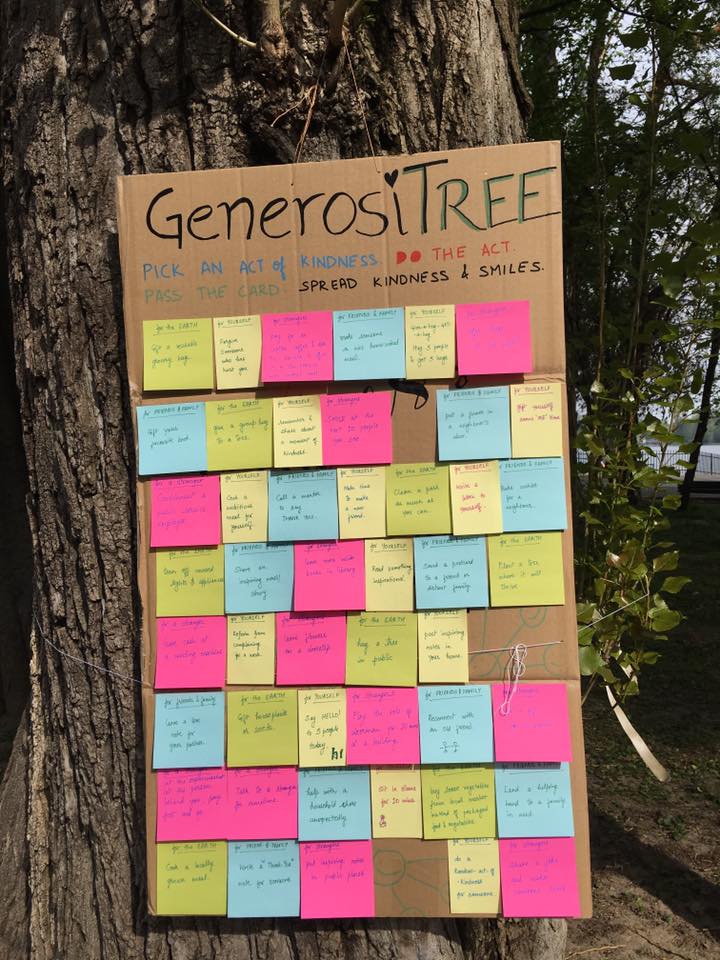 We had gone to the park as part of my husband’s office team community run initiative and initially we hung the board on a tree where most of us had collected. It was great to see the excitement, both of adults and children.

I heard a teenager explain her surprise and excitement at the play of words to her younger sibling. (Thank you team London for the idea!)

Later we went around the park with the board to offer them to everyone in the park and that’s when it hit me. It was difficult to find people to even listen to us for a minute. Everyone thought we belonged to some organisation or faith and were out to sell something to ask for donations.

Then we started "choosing" whom to approach. Young families with little kids were open to listening more than anyone else! College students were the least interested ones... I feel so bad making these comparisons but to say the truth, people who listened were an exception.

Even those who listened, would ask, “okay so what’s the story? What are you promoting? What cause do you work for? What do I have to do after I do the task? Where do I need to share it?” And when we said the story for us ended with them picking up an idea and they can choose to do it or not do it and then possibly pass it forward. They would be totally surprised. “That’s it! We just pick one act?”

“Yes! You just pick one act.”
And that’s when the frowns will turn into smiles! The best moment :-) “Wow! that’s a great idea!”

Slowly people who overheard, were interested when they realised that we didn’t belong to any organisation. One guy picked up “Turn off unused lights” and said that he and his wife were just talking about how to reduce their energy consumption! Another picked up “Give a group hug to a tree in public” They were a family of 3, with a toddler and they said their little daughter will love doing that act!

An elderly man was so touched that we came up and spoke with him that he was almost crying!

Later I was thinking, it is easy to give but what is difficult is to find someone who is willing to receive. And the best gift one can receive, is an opportunity to be able to give. I was also reflecting as to why did it hurt, when we were kind of shooo-ed away. It took me some time to actually accept that it did hurt my ego when I was shooo-ed away… that somewhere I wasn’t 100% selfless in doing the act and the part of me that was looking for a reward was hurt when it didn’t find a recipient and was happy when it did.

So how to really remove this part who still looks for rewards and who still feels bad when it doesn't get one. How to really be selfless?

Oct 17: yoyokhan on 'Trupti Pandya: Adding Compassion To The Prescription Therapy': "There is no Dankwood vape cart, instead, there...