I had the tremendous honour of being asked to be one of the opening sharers on Sunday 18th of March at the Awakin London One-Day Retreat: From Me to We which was about cultivating Ubuntu;

"Ubuntu speaks of the very essence of being human.... you are generous, you are hospitable, you are friendly and caring and compassionate. You share what you have. It is to say, 'My humanity is inextricably bound up in yours.' We belong in a bundle of life."-- Desmond Tutu

Trishna kindly asked me to share my words here (another request I feel honoured by!). May my words be of service to you :) 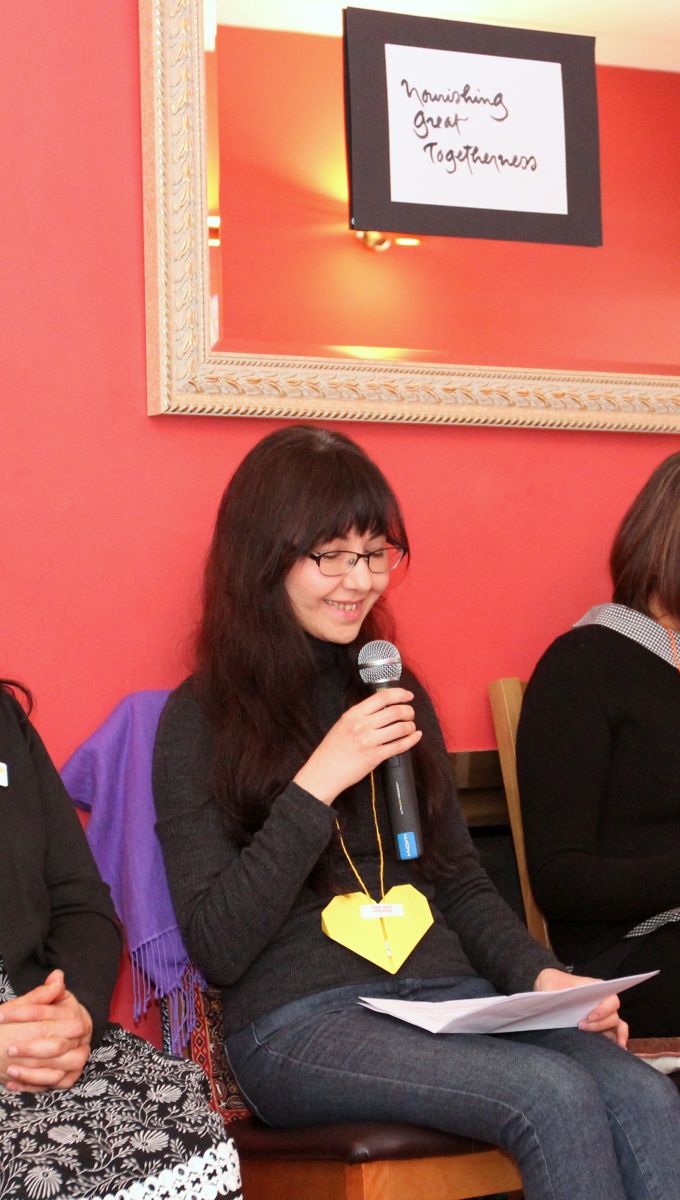 There’s so much that I want to share on this subject that it’s been hard to know where to start. But I want to talk about supermarkets, singing, Sufism, and sobbing strangers.

There was a line in the wonderful opening reading, Creating Welcoming Space by Sister Marilyn Lacey, which really resonated with me;

“ .. as tentative as smiling at the stranger in line with you at the grocery store”.


I’ve been mostly housebound and socially isolated for the past 12 years now, due to chronic illness. And I’ve been asked why I struggle ‘round the supermarket when I can get everything delivered.

And the answer’s simple: it’s the only way that I’m guaranteed some real-life social interaction.

But I don’t just smile at strangers. I stop. I notice. I ask, “Do you need an extra pair of eyes?” when I see someone stare at the shelves in befuddlement. I say, “Go on, give it here,” when someone’s loyalty card won’t give them a self-service scanner.

And I always pat them on the arm and say, “There you go, teamwork!” and “We’ve got to look after each other!”, to grateful agreement, just to water this seed of kindness with the concept of community.

You know, I find it really easy to be intimidated by the idea of creating community with a ‘big’ C, the way we’re experiencing here today (as my slow progress with my social enterprise pilot project will attest to!). But community with a ‘small’ c? I find it’s in every small act of kindness if I’m mindful of it. Especially in supermarkets.

As for singing .. as Vicky will confirm, I love to sing - usually at retreats, oddly enough, so you’ve been warned! - so I was seduced by the BBC’s recent Saturday night show, All Together Now.

The premise; each contestant had to inspire the community of 100 music professionals and performers to stand up and join in with their performance. The greater number who sang, the higher the person’s score.

Everyone sang well - sure, some better than others, but everyone had talent - but there was an indefinable quality that separated those who had, say, 50 people on their feet, and the two who had 100.

It didn’t come into focus for me until I read a Facebook post by Mark Silver, a Sufi teacher who believes that “every act of business can be an act of love”.

He’d assisted in a class at the Sufi school he attended, and watched a pair of students as one practised connecting to the other in prelude to a healing session. A smile crept onto his face as the one in “healer mode” was doing the classic “attempt-to-connect” - leaning forward, hands outstretched, a curious strained expression on their face. This student was “sincerely trying to connect, and it just wasn’t going to work like that.”

I know I’ve been guilty of this myself, when I’ve been hooked and wanted to hot-wire going from me to we. And I realised the unsuccessful singers were doing just that, too; grasping at connecting with their audience.

And the ones who were successful, who even the most resistant members of the 100 stood up for? It felt like they were singing for THEMSELVES. They connected to themselves FIRST.

“ .. take a moment right now .. to notice how your heart is feeling. And, no matter what is going on, notice that there is space. Upset? Worried? Stressed? It’s happening in your heart, and it's already there. So there must be space for it. It must be okay.

Now, in that space, ask the question, “Is love available, even here?”. Wait for the answer. Notice how your heart feels even when it remembers that love is available.

And then notice who you want to connect with, whether they are in the room or not. Focus on them, and then .. sit back. Relax. Open. Soften.”


Connecting to myself first can be tough but if hospitality means “creating welcoming space for the other”, I should probably be IN that welcoming space to greet them when they arrive. Right? 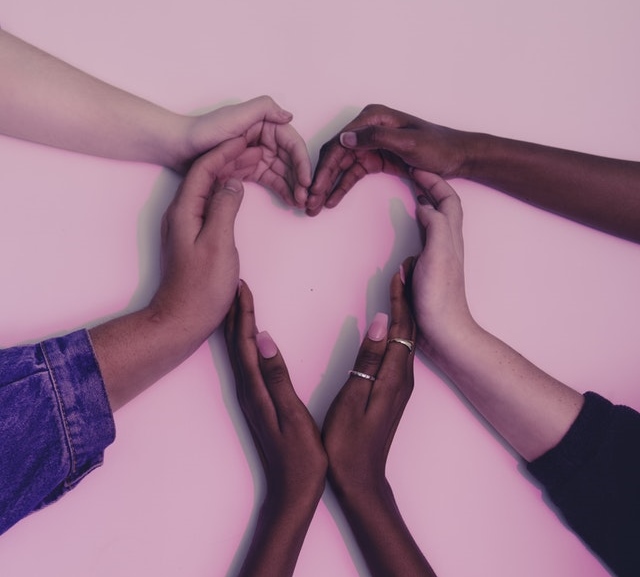 And finally .. I was recently reminded of how tough it is to ACCEPT that kind of hospitality. From Sister Marilyn Lacey’s post again;

“When I am welcomed .. I can relax, feel un-self-conscious, happy .. and when I’m not I doubt myself, shrivel up, feel not accepted and NOT ACCEPTABLE .. and, if it happens often enough, I will question my own self-worth.”

I was housebound for two weeks recently and when I finally left my house, I found a girl who had knocked on my door a few hours earlier to discuss my energy supplier, sitting on the ground, in the snow, holding her mobile phone and crying.

I hurried over and asked, “Oh sweetheart, what’s wrong?”. To which she sobbed, “I keep blacking out, I can’t move, and no-one knows why.” I bundled her up in my arms as she wept and shivered into my shoulder.

Over the next twenty minutes I asked a neighbour to help me move her onto my picnic blanket and my cushion from my wheelchair, and another for a hot water bottle.

I explained about my illness, and how my legs don’t always work either; when she asked how my friends react, I joked quite seriously that new friends have to accept it as part of the deal; being with me means that at some point you’re either gonna have to carry me or fetch me a wheelchair!

But what stuck with me the most, amidst her cries that no-one understood or accepted what was happening to her, was how she’d purposefully separated herself from her colleagues in case she collapsed, and how she didn’t feel she deserved the little bit of spontaneous community my neighbours and I offered.

She worried about being a burden, about delaying me, about everything. And when I finally dropped her off to join her colleague, I could sense what she felt because I used to feel it, too: shame.

Shame of being different. Shame of needing help. Shame of relying on the kindness of strangers. The shame of being a burden. Even after she’d blacked out in my arms whilst I’d HELD her, for heaven’s sake.

I don’t feel that way anymore, of course. Well, not so much. I’ve discovered that my vulnerability is my greatest strength when it comes to connection.

But when at least 12% of the population has four or more Adverse Childhood Experiences (ACEs), and at least 50% find attachment to others a challenge (and hey to anyone else who suspects they’re equally stranded on the island that that particular Venn diagram creates), it’s not just about CREATING community but ACCEPTING community to start with. Accepting that ‘me’ has been a part of ‘we’, all along.

For as the Sufi poet Rumi put it so beautifully; Your task is not to seek for love, but merely to seek and find all the barriers within yourself that you have built against it. 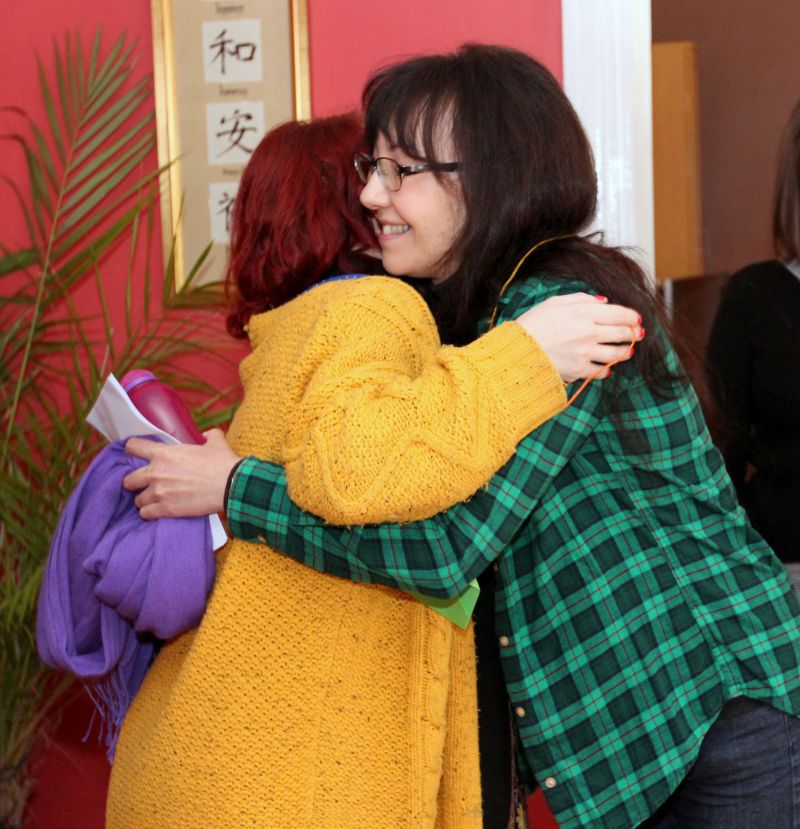