[Last Sunday, during the opening circle of Karma Kitchen volunteer orientation, an unsuspecting guest lingered around the periphery. It was our head Chef, Dhruva. "Would you have a few minutes to join us?" He sat and heard everyone's introductions and stories. At one piont, he tells us, "Actually, can I share a story?" Below is what he shared.]

I always wanted to engage my son in such service, but he wasn't very fond of Karma Kitchen. It took away his father for two hours, on his favorite play day -- Sunday!

Years went by. I kept volunteering on Sundays, and my son kept growing older.

Last summer, I needed a little help with the restaurant so I asked him to spend some of his days working with me.

One fine day, we got a customer call. "Do you have Karma Kitchen tomorrow?" the voice asked. My son, growing up with Karma Kitchen, exactly knew that it was a Sunday and yes, we did have Karma Kitchen the next day. Somehow this caller and my son got into a deeper conversation, as this stranger on the phone shared how his life was touched by Karma Kitchen.

For the first time, something shifted in him. "Ah, this is what my Dad has been serving all along!" You know, I could've told him as much as I wanted about Karma Kitchen -- but nothing like hearing it unexpectedly from a stranger!

Now my son is in 11th grade. Just recently, he participated in a big speech competition. And he spoke about ... Karma Kitchen! He told this story that I'm telling you today.

That's where I heard it for the first time too. He won that round of the competition. More importantly, though, I felt proud of him. I always wanted him to be influenced by Karma Kitchen, and it happened -- at it's own pace, with the organic beauty of serendipity.

So many people are transformed by Karma Kitchen. For some, it might be instantaneous. But for some it takes 9 years.

As any chef will tell you, some recipes call for slow cooking. :)

Actually, it so happened that a senior center called the restaurant to cater food for their event. I gave them the prices and they came back and said, "Sorry, it's too expensive for our small budget." I reduced the prices, but it was still too much. Remembering my son and spirit of service, I called them back, "You know what? No need to pay anything. I'm just going to come there to volunteer and cook for you." They couldn't believe it, but I was just paying forward my gratitude.

Thank you, all, for serving so consistently for so long. 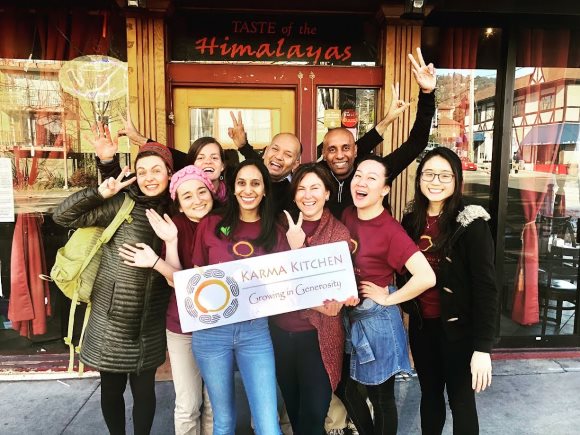