After Gandhi 3.0 retreat, I held a quiet wish to host an Awakin Circle in my hometown of Vienna one day. And that wish came true last week when Nipun, Hermann, Katzi, Alma and I reunited for our first Awakin Circle in Austria!

It was pure magic. I can not only feel but see the difference in the mindset of the people who were touched by our evening together.

We rented out a local space that could host a circle, and maxed it out with thirty-five people. Some were friends, some were yoga students, some were from Dream Academy, some were just brought by serendipity -- like the most famous Austrian entrepreneur, Heini Staudinger, and a young politician running for parliament.

We started with an hour of silence. Most of the attendees had never meditated in their life. After the hour, we did a quick circle with everyone sharing how they were feeling. I was a bit nervous to do this, given that no one was familiar with the format -- but the first person to energetically shared, "I've never sat like this in my life, and it was the most amazing experience. I feel so connected to all of you right now." It was surprising, but most people felt the same way. Silence touched people deeply. Although no words were spoken, people could feel the love. At the end of the circle, Nipun joked that we could just end the evening now. But, of course, we wouldn't let him do that. :)


Nipun shared stories of the very beginning of Awakin circles 19 years ago with his mother cooking for friends as well as for strangers every week. Especially touching was the story of Nipun leaving with his wife for the walking pilgrimage to India and asking his mother for her blessing. His advice to her was, whenever she worried for him not having enough to eat she should feed someone in her surrounding. Or when she would have a sleepless night worrying he would not have a place to stay, she should host a stranger and treat him like her own son. Finally she gave him her blessing. What Nipun spread amongst us was an unforgettable model of selfless love. Alma did a simultaneous live translation. The space kept getting deeper and deeper. In the center of our circle was a beautiful decoration with candles, and small plants that everyone later carried home with them. Some people sat on the ground and others in the second circle of chairs. A quiet sense of oneness was taking over the room, and one couldn't help but wonder, "What would the world be like, if we held each other in this spirit?"

As the circle ended, we all got together in a giant group hug. Austrians don't do that, but we still did. :) Candles in the center were still burning bright. "Does someone have a song to offer?" My friend Katica spontaneously offered a song that we all sang in chorus -- Love is a ring, and a ring never ends.

A young couple was about to embark on pilgrimage; an elder was dying of cancer; a college student was at a crossroads; a college professor who traveled 4 hours one way to be with us. And amazing stories of how people ended up there. One woman shared that her husband was completed a 15-minute interview with Nipun and texted her, "Come tonight. Taxi is already on the way." In the thick of her political campaign, she had no spare time but she hopped into the cab. And let's just say that, at the end of the night, her husband had to drag her out. :) 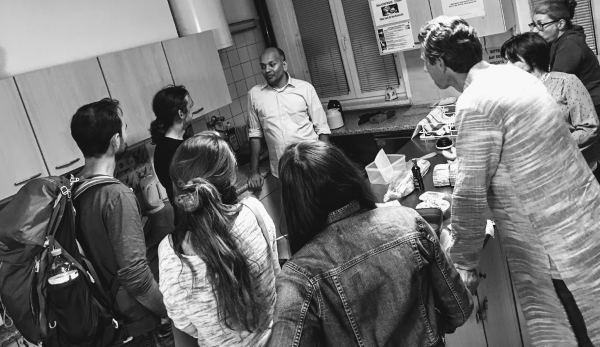 Following the circle, we had vegetarian (and vegan!) food. So many kind acts brought all that together. Everyone was buzzing. What was shocking for everyone was that Nipun did everyone's dishes! Small groups of people would create mini circles and share stories, ideas and deep thoughts, while doing dishes! Very counter-culture here in Austria, but perfect "laddership".

Hermann, Katzi and Alma were the absolute dream team. Of course, we had our midnight to 2AM circle at my dining table (as much as we wanted to let Nipun sleep!) that left us all buzzing even more. On the way home, Katzi sent this email to our circle of love ... 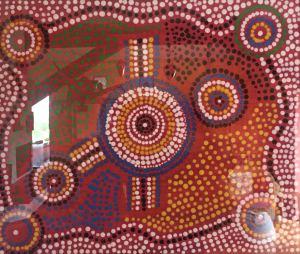 Thank you, Nipun, for showing us again true leadership. I am more than grateful that our spontaneous conversation at an event in London, led to India and now memories for a lifetime. And it just keeps on continuing on and on. You are touching my soul and I feel so connected. The ripple effect is spreading further and further ... more than our words can express right now. Thanks again to the entire dream team for the co-creation of this fantastic evening. I still see and feel the spark in the eyes of so many participants. The whole event connected me to a deep spirit within, and that moves me to share my favorite aborigines painting (on the right).


We have decided to host Awakin Circles every other week. I'm dreaming of a 1-day retreat in May, with many of the change-makers who attended and many more. And who knows what else happens.

THANK YOU in the biggest meaning of the word! And especially to ServiceSpace Mom and Dad, whose spirit was so much with us. No three steps and a bow. Just bow all the way through. THANK YOU, Nipun, for leaving your spirit of love to ripple and sparkle in Austria!