Last year, at Gandhi 3.0 retreat, Sheetal met Rev. Heng Sure for the first time. He shared an unexpected 10 minute car ride with him, which ended up being deeply transformative for him. Since then, he has been doing a bow every morning. He wrote to him:


"Your 10 minute dharma talk really lit a light bulb in me. If I remember correctly, you mentioned that bowing is about emptying the mind and purifying the heart. It is akin to opening and emptying the Pandora's box of emotions. I am glad you shared this as often times after a spiritual practice, I end up feeling worse off instead of blissful. Now all I need to do is "Sweep Clean" the inner junk. I've also been playing the anti-greed mantra aka I-Have-Enough on loop, in my head and heart. When you sang it live, the vibes and depth of the lyrics hit me like a truck in the chest. I was always attracted to the idea of growing in generosity, but never thought of it as a practice in overcoming greed."


Rev. Heng Sure similarly felt a connection to Sheetal. That ultimately led to both of us being invited to Poland, as a part of the "ServiceSpace delegation" (with others, including Audrey!). It feels like an honor to be among these group of cultivators, to spread love together -- in Poland!

To get there, though, we first needed a get a visa. And that was a journey of its own. :)

We first went to the Poland embassy website and it was rather confusing, so we enlisted a seasoned Visa consultant to prep our paperwork. Three weeks went by and no response. Later, we learned that they were now accepting new applications for 3 weeks due to some technical issues at their end. Once we finally applied last week, they sent us a reject letter stating "Justification for the purpose and conditions of the intended stay was not provided." This after we had submitted all our paid-for flight tickets and travel insurance, proof of our accommodations Krakow and Warsaw in along with letters of introduction from Rev Heng Sure and others.

Another monk, Jin Wei, then started helping us. It was incredible to see him in action. All the way from US, he kept calling the Bombay embassy on the hour. Then he tried Delhi embassy. Got through eventually, and they gave him a pointer to "go in person and take more documentation." That's what we ended up doing, but his persistence for this -- when we know he has million things to do -- was so touching. "In the phone menu, it said to press 1 for English and 2 for Polish. I would always press 2 since I want them to know that a Polish person is vouching for this," he told us. He was ready with more documents, had queued up lawyers in Poland and was even considering writing to the foreign minister of Poland! It seemed like extra-ordinary effort, but what became evident is that that is just how monks operate. Full effort, constantly. 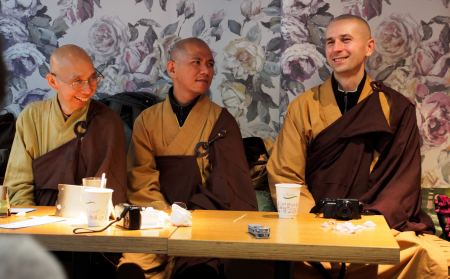 Finally, we trek several hours to the Bombay embassy. Then we had to wait 5 hours for our 10 minute interview. At one point during the interview, things were getting tense since the two tough looking officers were unable to understand our situation and it looked like they may refuse the visa. They did not seem convinced as to what work we did in ServiceSpace and why we were invited by a California based DRBA to Poland! (Just imagine trying to explain how you are hosting an Awakin Circle in Warsaw Karma Kitchen in Krakow -- without any shared context!)

Just before we had stepped into this embassy, Jin Wei got on the phone with us to review our documents and overall approach. It was past midnight for him, but he wanted to be on the line, in case the visa officers needed more information. And ... this was the REALLY moving part -- he recited a few chants for blessing the visa officers and for our equanimity to accept whatever the outcome of the meeting might be! Namo Avalokiteshvara Bodhisattva. This journey is about the visa, but seems to be so much more.

So here we are in this tense moment, fresh with the vibes from the chant, and Sheetal suddenly remembered how 4 days ago, Jin Wei had joked maybe we could give our freshly printed Polish Smile Cards to the Visa officer! 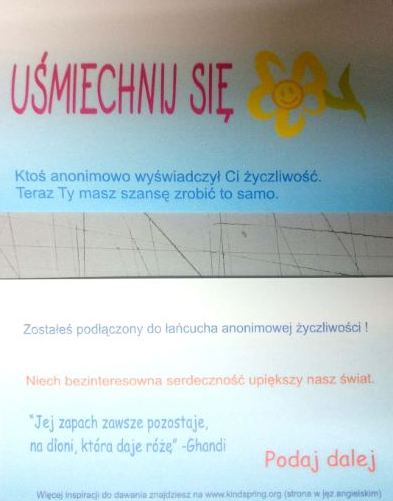 So he did. Sheetal pulled out the first Smile Card and offered it to the officers and explained how we believe in doing small acts of kindness to create a better world.

Both the officers cracked a smile and said, "Actually we also believe in doing small acts of service, and that's why we had agreed to meet you. On paper, we were going to refuse your visa again, but decided to see you anyway."

We waited half an hour outside, as they came to their decision. And we got our visa!

As we left, we lovingly pinned a heart pin on the secretary, who was smiling wide and wished us well on our journey. 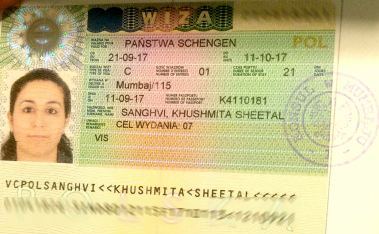 In couple days, we will be arriving in Poland -- with a lot more humility, surrender and equanimity as well as deeply enthused intention to serve the emergence.