[On Day 2 of the Gandhi 3.0 retreat, Sheetal Sanghvi spoke "briefly but deeply" about his personal journey. Some volunteers, who were moved by that talk, offer this lightly edited transcript to share the inspiration forward.]

My early years were ones with lot of spiritual inclinations. I grew up in a family with a strong interest in pilgrimages, visiting saints, attending holy talks. We would have guests all the time. We were a family of 8 and but we always cooked for 15 -- not knowing which extra 7 will show up. My father had limited resources but he build a house because he wanted to host pilgrims. He built it slightly out the city and built 6 rooms. Yet he kept all of us in just 2 rooms -- so that 4 rooms will always be available for guests.  I grew up in that atmosphere.

Today, in many ways, I feel like a story of Chinese bamboo which lays dormant for decades and then suddenly sprouts many feet overnight. I think my seeds were planted and suddenly after 10 years, realizations happen overnight. 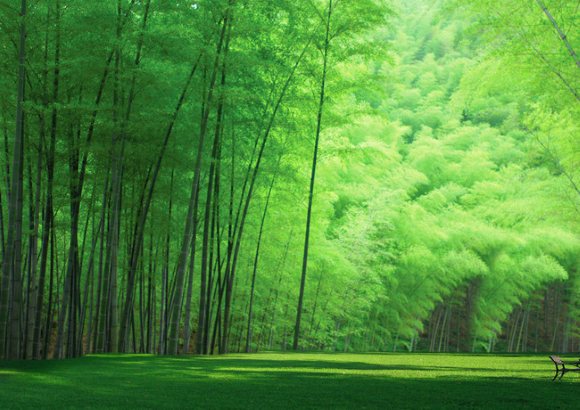 Yet, I remember, at one point, I just looked into the mirror and said, "What am I doing? This is not who I was. What have I become? I just had this deep distaste for everything and I remember like while all my friends were going bar hopping I started what I like to call Ashram Hopping. I would just find myself in different spaces in constant enquiry -- what is all about? I don’t know, but I don't get what the mainstream is saying. Somehow I had lost touch with myself but there was still a fragrance of that deeper inquiry.

Then, grace happened. I would like to use the word grace since it reminds me of an invisible strength that kept me going in that ashram hopping mode. I somehow took a lot of wrong turns to reach a right house. It's very difficult to say thank you to just one thing because each effect is connected to a thousand other causes. Yet, in many ways my journey started in a house that many of us call the Mehta or Metta House. It's where Awakins have been held for every Wednesday for last 18, 19 years. 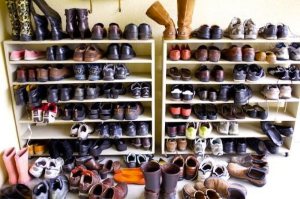 We've heard the measure of one’s heart can be kind of gaged by the number of shoes outside your doorstep. By that metric, this household is truly rich. I was like, "Yeah, that’s what I want my house to look like some day."

I came back home and I shared this with my mother. She was very happy to hear it. Before starting on it, I wanted to spend some more time around other spiritual cultivators since I was myself a weak sapling and others would help me stay focused on the spiritual journey. So I decided to head out on a pilgrimage of sorts. But just when I had worked out all the details and I was inspired to go, I get a call from the Doctor. My mother only had six months left to live. She had a liver condition and there was no way my heart would allow me to leave my mother. The universe had decided my fate for me. I would stay home, take care of my mom and turn our home into the "Urban Ashram." Let’s convert our own home into that which we are seeking that which we want to do.

About 9 years ago, we opened the Urban Ashram and my mother lit the lamp on the opening day. Looking back, that was the happiest I have seen her in her life. She was just beaming. Beaming. Her last 6 months actually ended up of being 3 years plus and she got to witness a little bit of my father's vision, of the Mehta household's shoerack. We kept getting guests from all over the world. We constantly held circles, we brought practices into our daily lives. When people asked me what all this was about, I would say, "It's a spiritual kindergarten. It's about remembering the simple things -- try to pray before eating food, try to cook with consciousness. We held circles with women, aritists, movies, anything to do with transformation. So many friends like Nimo and Nipun-bhai would come over as guest speakers. Many thing that emerged then continue to happen even today. While are here, Awakin Circles still continue; even the Wednesday after my mother passed away, we held an Awakin. It has all been quite beautiful. 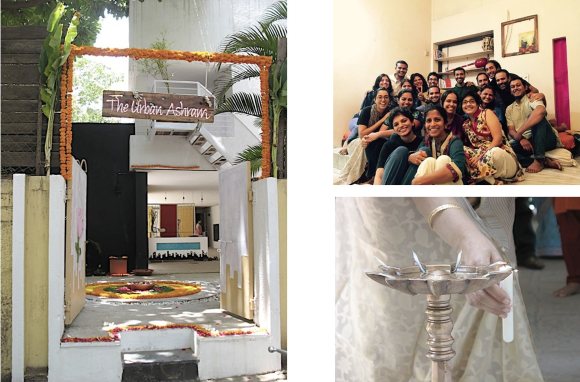 Amidst the light, though, were the shadows too. In private conversations with many kindred spirits, we often share that we feel burnt out. Sometimes after 2 years, sometimes after 10, but sooner or later, it hits up. How do we deal with expectations from others? How do we deal with boundaries? Ok, I can give you my living room, I can give you my guest room but can I give you my bedroom? How much do you give, before you collapse? That's a boundary that I have been reaching for the last year or two and I feel very safe to confess this here. I did reach that point.

How much do you give? How much can you give? Are you here just to give? So that’s one boundary I was holding. I decided to just take a break the whole last year, to explore where I can do things differently. And I realized that actually we never had a lack of physical material resources -- that always kept arriving many magical ways. If you feed the birds, rice packets seem to keep arriving. Like when we held Seva Cafe locally, people would drive all the way down from Bombay and train all the way from Delhi, just for our 3 hour event.

Still, where's the boundary between self and others?  There's a quote “Swarthi bano, par ye to jano ke aapka swarth kisme hai!” Be selfish but please realize where your self interest actually lies. This is what is giving me hope these days.  That is, how do we take care of ourselves while taking care of others?

As caretakers, it is important to take care of yourself as well. We can only give that which we give ourselves. A flute can only allow the music to come through if it is hollow, empty and well rested. So that’s my daily prayer: "Dear Lord, make me an instrument of that peace." Can I be all you need me to be? Can I trust, surrender and become a flute so that the divine can play through me? Or as Rumi would say, "All that is needed for a seeker is to become a flute. Each breath is a melody." We just need to rest and let the divine play through that space.

The journey can all be very confusing, at times. You are doing trying to do good but this whole momentum of your own past conditionings conflicts with your own new realizations, and it's a mess.

Yet, just being a millimeter higher makes all the difference. Grace arrives at your doorstep.

At some point in July 2009, by a series of wrong turns, a woman walks into the Urban Ashram. She was looking for vegetables, but landed up here. We had both been studying yoga, but in different parts of the country -- I was in Himalayas, she was in Kerala. As she was lost, but as she walked in, she said, "I just saw that board outside that says yoga and I would be happy to share what I've learnt." I said, "Sure. We have the space and need a teacher." So she started the next day. Soon, we got married. She's still sitting right next to me, even in this moment. 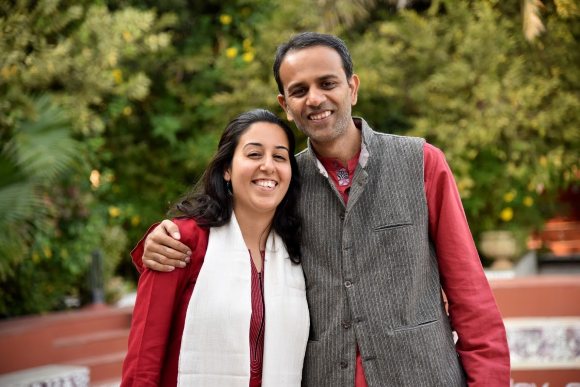