[Below is a note that was sent to our Awakin Calls volunteer team.]

As many of you know, we lost a dear friend, brother, co-journeyer and co-servant earlier this month. 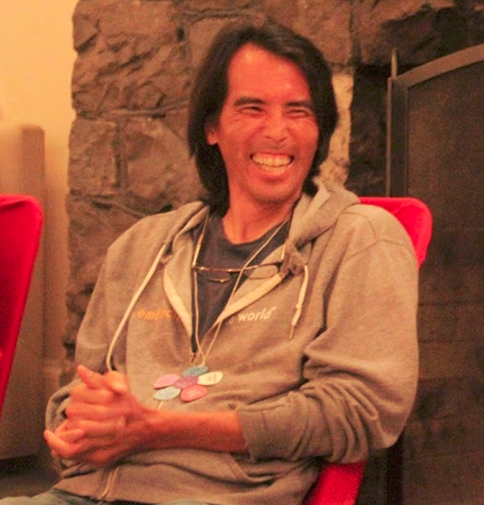 Makala “Kozo” Hattori (1965-2021) was much more than one of the coordinators of our Awakin Calls team – he was an inspiration, guide, tireless volunteer, and cheerleader as well as purveyor/transcriber/translator of so much of the weekly wisdom that emerges from our collective efforts to bring forth sacred conversations into the world. Though I don’t live in the Bay Area, there was hardly an Awakin Circle or ServiceSpace gathering that I attended while in town where Kozo didn’t embrace me with his warm smile and big hug, his wry humor, and his boundless enthusiasm for some of the most recent Awakin Calls conversations he was listening to – the details of which he had an uncanny recall. “Wow – I’m still reeling from that Jeanne Kahwajy conversation,” he once said to me. Or “Michelle Kinder! Amazing! And Andy was such an amazing moderator for that call!” And so many more.

Kozo was a true student of life, and in his exuberant thirst for truth, beauty and wisdom, he was a teacher to so many. Many from our ecosystem and community who were near him during his final months marvel at the peace and joy by which he approached his transition. A virtual memorial service for Kozo will take place Sunday, March 28th, 2-4p (Pacific Time). Please visit this link to RSVP (access info will be sent to the email provided there). Additionally, his family has lovingly created a memorial website where we can share memories and photos of Kozo.

I was thinking I would quote from a tribute that our fellow volunteer Cynthia Li wrote about him, but decided that excerpts could not do her words justice, and so I attach her full reflection to this message. Cynthia “met” Kozo for the first time when Kozo hosted the Awakin Call where Cynthia was the guest. She became his physician in his final year or so of life – but from a physical distance, given the pandemic. They met in person only once, right before his final transition from this life. “For some reason” their bond was one that extended past time and space. I attach her reflections about a special, sacred bond she held with Kozo – a bond that, like so much of what emerges from our ecosystem and platform, “for some reason” seems to have a sacred depth that defies logic or reason.

Kozo leaves behind two beautiful and beloved sons, Jett and Fox, in addition to so many whom he has touched.

In his final months, he remained active on Awakin Calls, and Pavi recalled this:

I remember talking to Kozo early on in the pandemic, about what I saw to be his phenomenal participation in Awakin Calls-- how in a time when he was navigating such profound edges, he continued to give so much to them. Something he said pierced my heart. He said every time he had a chance to host or moderate an Awakin Call, he thought of his sons. And how, if he passed away before Jett and Fox were grown, he was so grateful they would have this repository of conversations to turn to over the years. That in listening to them, they wouldn't just be listening to their father's voice, but they would also have the chance to hear the wisdom and insights and stories of so many remarkable men and women. "Imagine that Pavi!" They'll get to learn about Jolanda, and Ariel and Judith Blackstone, and Manulani and Pierre Pradervand..." and the list went on and on.

For those who visited him in his final days, Kozo reportedly says that he will continue as a “cosmic volunteer” for ServiceSpace – continuing to work for the awakening of consciousness from the other side.

In honor of Kozo, please consider listening to his own Awakin call about his healing journey with cancer (“Love Heals”), or one of the many calls he hosted or moderated, or any of his other writings. Of course his energy is manifest in so many invisible ways as well; he served the ecosystem and the collective tirelessly in many background and subtle ways.

What a privilege it is be part of this community that Kozo so lovingly helped seed and nurture. In remembering Kozo, I am grateful for his example as I reflect upon the many layers that still seek unraveling within me, and the ongoing work that calls out, in the journey toward living a life of greater love.

With love and gratitude for you all, and with a deep Aloha to Brother Kozo,

Reclaiming Our Common Home "The path to an ecological civilization is paved by reclaiming the commons--our common home, the ... Read more

Kindful Kids: Nurtured By Nature This week's 'Kindful Kids' newsletter is on Nurtured by Nature. Take a look."Nature can bring ... Read more

May 05: Rajni on 'Two Gifts Of Devotion': "Your Compassionate heart sees real beauty in...

May 05: Michaele Premet-Rosen on 'Run with the Unexpected So many ': "So beautiful it moved me to tears 🙏

May 05: Jignasha Pandya on 'We have been following with ': "Thank you Galia :)

May 05: Sarita Ganesh on 'Two Gifts Of Devotion': "Nicely captured Trupti, with all your sensitivity.

May 04: Nisha Srinivasan on 'We have been following with ': "Thank you so much Galia