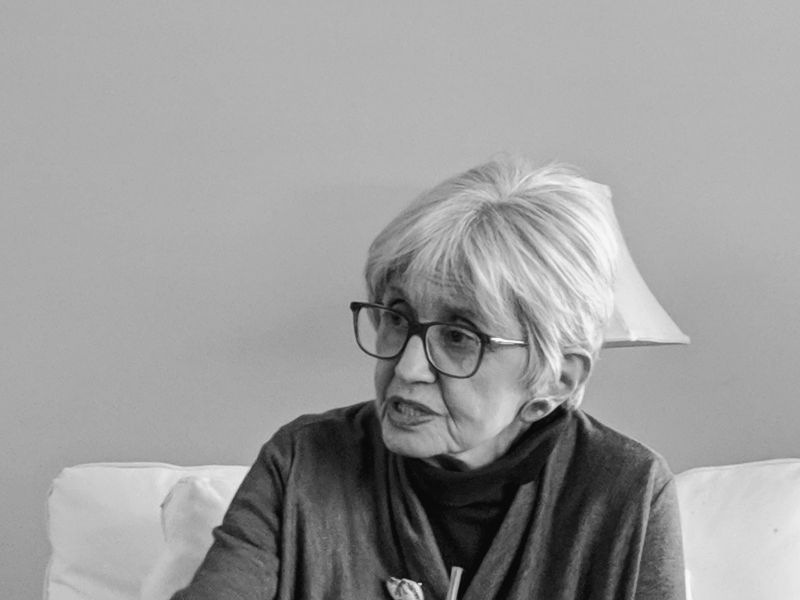 [A few of us had the great joy of connecting with Dr. Rachel Naomi Remen earlier this month. She is a master story-teller, having collected stories of thousands of people. Lots of lovely tidbits came out in the conversation, which will be shared soon I’m sure, but for now here’s a powerful story we heard on her own early stages in the journey of transformation, with the help of an embodiment of compassion…]

In order to do that, it was very clear to me that being a woman was a ‘disability.’ So, I deliberately repressed anything you could think about me that would fit a ‘feminine principle.’

I remember in my residency in New York (over 50 years ago, in 1962), I was the only woman in the department of pediatrics. When they selected teams, nobody wanted a female on their team, and so I was assigned to one. I greatly admired the skills and competence of my colleagues and was delighted to be a part of this team. I was in the role of intern at that time. We worked 36 hours on and 12 hours off, again and again. I would go months running in the tunnels underground. Months without even seeing the sunlight.

About six months after I was setup with my team, we were called to an emergency C-section with the chief resident. A senior resident and I run through the tunnel, get to the operating room, and help take care of it. The babies happened to be twins, and everyone was going to make it! It’s 4AM on some random day, after God knows how many of these types of experiences (that night alone, there were seizures, beatings, a heart-stopping automobile accident involving three small children), and we are running back, in our all-white scrubs, to the residents quarters to get a little bit of sleep, if possible, before the next call.

As we are running, my senior resident says, "I think I owe you an apology."

My immediate thought was: ‘Oh no, what else did I do wrong?'

But that’s not what this was about. Instead, he confessed, "I didn’t want you on my team…"

I replied, "Well, I already knew that."

He responded ‘Yes, but I was wrong. Working with you is like working with a man."

And you know what? I was thrilled! Although I was careful to appear unmoved by his words, inwardly I was overwhelmed. It was a treasured moment in my professional life. It would be many years before I stopped seeing it as a profound compliment. There was nothing in my training or my professional experience that reflected my wholeness back to me or honored it in any way. And as I had not realized I had lost it, I did nothing to defend it. I would think about this moment in later times. I had successfully repressed feminine principle in myself to that degree.

The more I repressed, the more successful I got.

Soon after my training, I received a powerful reinforcement for the person I had become; I was appointed my first position of real authority within the medical system. So now I get this wonderful position, and I’m climbing the ladder there, and doing very well. Now it gets to the point that I’m full-time faculty and headed to be a full-time professor. I’ve even got an office, my name is on the door – it’s everything one can dream of on that path. And with this promotion, upon acceptance of the contract, they handed me $100 for the new office, in order to go buy a chair and a lamp. Everything else was pretty much filled in.

So I go to the Stanford Shopping Center, which has a furniture store. I go in there, and I see a statue on a table to the right of the door. She is an Asian woman, with a bottle of water that is being poured on the ground. For some reason unknown to me, I’m riveted and thinking, gotta have it. Of course, I look at the price tag, and its $100. So I have to put it down, and I dutifully buy the lamp and the chair.

So I realized that something wants me to have this statue, and if I don’t have lunch for a couple months, I’ll be able to buy it. I went back to the furniture store, kind of hoping she would be gone... but there she was. So I got it.

And I didn’t know what to do with her! In my office there wasn’t a place, so I put her on my desk. Right in front of me. For 4 years. And then, I get the real promotion. I was asked to run the pediatric outpatient department.

Instead of an opening, I’m feeling that the door is closing. I have become somebody so different from who I actually am -- some kind of mental machine that runs things with an iron fist and maintains ‘success.’

I look at her, my statue. And I heard her say, "don’t leave me behind" – and I had the feeling that I was dying. Something’s wrong.

My next thought was, "I’m not going to do this." I had just started attending an amazing series of sessions at Esalen Institute (which was the first place that recognized that my undergraduate degree in philosophy was not an ‘irrelevant’ major for medicine, but rather saw that medicine WAS a philosophy).

I realized, I had to leave my job, promotion and all.

So I went to the chief’s office, and told him I’m leaving. They were flabbergasted. Nobody would speak to me. I couldn’t even say why I was leaving.

I was told to pick up my things and leave in 24 hours. Turns out I didn’t have any stuff to pack up – save for that one statue. So I picked her up and took her home, and put her on my dining table.

For two weeks after leaving, I was in shock, thinking to myself, 'What have I done?!'

Somebody happened to come by my place, looked at my dining table, and said, "Oh, you have a Guan Yin!"

"Oh, they say she is the feminine aspect of the Buddha, the Goddess of Compassion."

I realized I had not only left her behind, I had eradicated her from my consciousness in this journey of becoming a ‘powerful’ figure in medicine.

In a profound way, she -- this statue, who I learned was Guan Yin -- represented my healing process, as my unconscious reached out in support of what was neglected and disowned. What has come since is my reconnection with this side of life, both within me and in medicine. This statue has stayed on my dining table for nearly 50 years, reminding me to not leave her behind. But now there’s deeper understanding of what she means.