Many months ago, Jin Wei, a Buddhist monk, set the intention of starting a Karma Kitchen in the country of his birth -- Poland! Particularly with a four-pack posse of ServiceSpace veterans coming together for a delegation with Rev. Heng Sure, he asked around for restaurants who might be willing to give a try. Didn't get a lot of traction. Then, somehow, he ended up on a phone call with Ela. They didn't know each other, and she didn't know about Karma Kitchen, but within a minute of their conversation, she says, "Let's do it at my restaurant." "Really? Are you sure?" Jin Wei thought in his mind. Before he could say anything, Ela followed up with her response: "Yes, I'm sure. Let's do it." 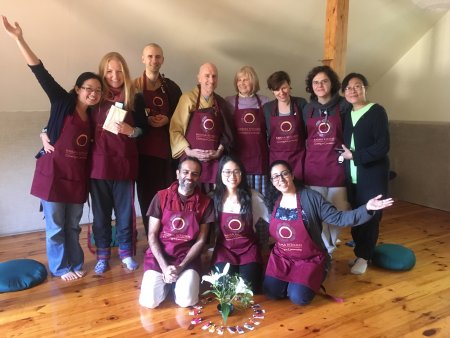 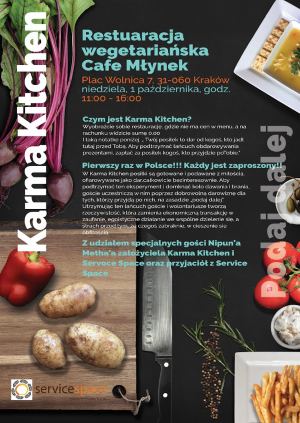 Another monastic, Jin He, designed a brilliant poster that hung on the front doors; Audrey, Khush and Sheetal reconfigured the ambiance, including manufacturing a brilliant gratitude wall; the restaurant staff prepped some awesome vegetarian items; Ela cued up several musicians for different times of the day; a local chef had come in to cook an entire additional menu with Indian food; everyone donned the unmistakable smile pins.

An inspired crew of volunteers went through the orientation. Rev. Heng Sure himself put on the apron and joked, "Restaurants usually have bus boys, but we will have bus monks." He was serious, though, and modeled that by serving for six straight hours! That act of incredible humility silently pushed others to step up their compassion.

At 11AM, we opened the doors. Few tables immediately joined, and given that the restaurant was situated in one of the hippest areas of Krakow, we were ready for the steady stream of people through the day. Connie, Jasky, Robert, among others, were our superstar servers. The restaurant had three seating areas, including the popular outdoor tables. "Sunday in Krakow with this weather is unbelievable! You guys brought the good weather with you," Ela said with a big smile.

At one table of three, a young woman told us, "Actually, I'm going through a really difficult time, financially. But today is the most I've ever paid for a meal. I've been so moved by all of you. I came here for a quick bite, but two hours later, I can't leave. We have to start Karma Kitchen in Lublin!" 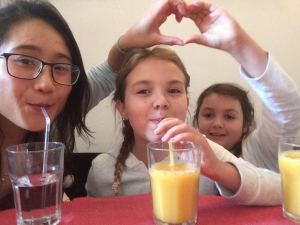 Everyone looked up to Sheetal, Audrey and Khushmita -- and they delivered in spades. In their vintage do-nothing ways, things just happened around them.

Arthur's two super-cute daughters insisted on volunteering (they even joined the Awakin Circle previously!), so Khush enrolled them as smile-pin taggers. And boy, did they melt hearts! Even folks who didn't end up coming into the restaurant would receive smile pins from these smiley kids -- and within 20 seconds, they would be hugging each other and taking photos together. 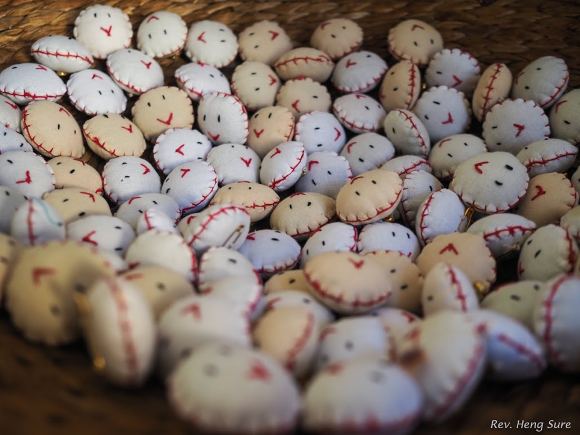 On one of the tables, a guest remarked, "In Poland, it's the norm to frown and complain. But it seems to be opposite here. Everyone is smiling and happy!" After their meals, everyone wrote something they were grateful for. And we saw notes like this one: "I was at Karma Kitchen. A lady named Khush told me I had a wonderful smile. I had not smiled much lately." 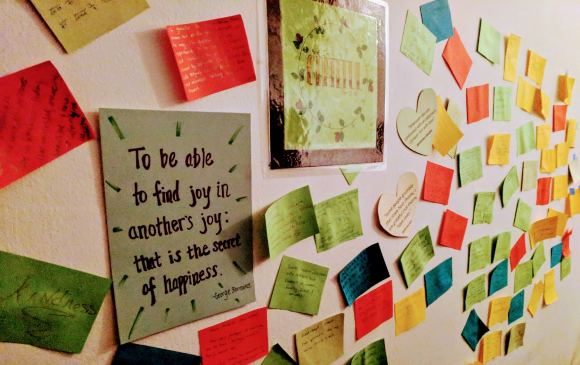 So many tables were brimming with gratitude. One note on the gratitude wall read, "I am grateful for a beautiful meal in a beautiful restaurant in a beautiful city with the most beautiful girl I've ever met." Some felt it was referring to one of the servers, but it's still being debated. :) One table featured a Polish gentleman who spoke fluent Hindi, so we called out our Indian chef so they could converse and connect locally. 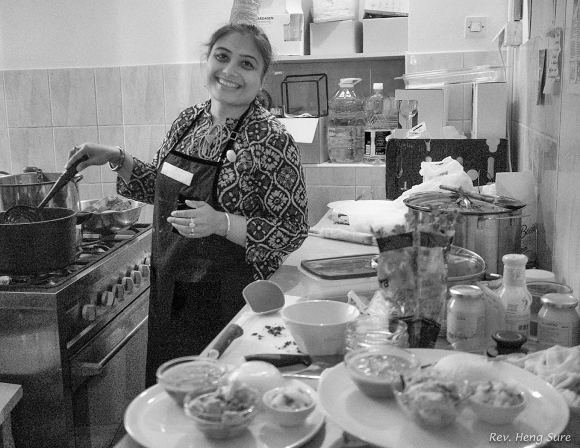 Various tables wanted to start Karma Kitchen and spread this pay-it-forward spirit, and we'd typically call in our in-house ringer, Audrey, to tend to the ripples. A couple was so moved that they wondered if we would come to their international school and speak to their class -- tomorrow! 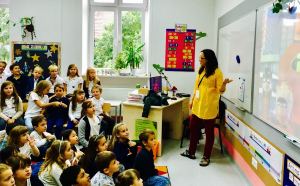 And we did it. Before showing Nimo's video, it would be teed up as: "Who is this? Superman. Who is this? Wonder woman. Who is this? Batman. Who is this?" Silence. And then the speaker would leak the answer, "Common man!" Cue up Miles of Smiles in Warsaw. By the end, everyone is brainstorming ways to be kind, common-man style. The speakers leave the class, but kindness remains.

For Polish speaking tables, Maya and Kasia were our translators. Sometimes when people would hear the concept and leave the restaurant, they doubted their own explanations -- but slowly learned that it's different strokes for different people in different moments. Our job is just keep rolling with a smile. :)

All the servers effortlessly fell into a teamwork mode, a pattern we've seen around the globe. 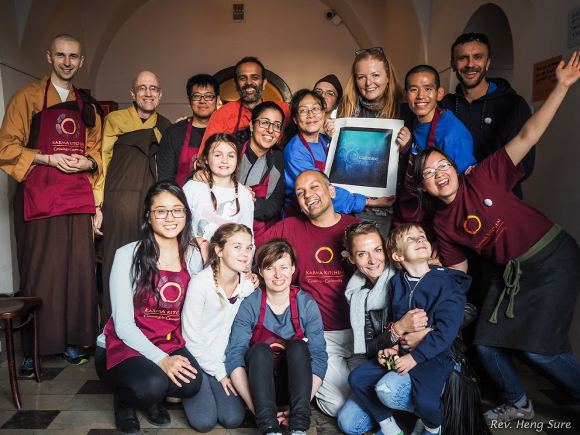 The day flew by in a timeless way, and as closing time drew near, all the volunteers came together for a closing circle. Ela shared how she'll never forget this day. For 17 years, she had been running this restaurant; the next day, she was to have surgery and depending on the outcome, she could be out for a significant amount of time. "It is just so perfect to be in field of love, today," she said. She was so moved throughout the day, that I would imagine she would've been in tears at many points.

We probably served about 125 guests, and it was all paid for by the surplus from Karma Kitchen Berkeley guests. And today, we received almost double our costs for the day. Ela decided to pay-forward the extra to the monks, who then paid it back to her. Turning red at their selfless generosity, she candidly expressed, "I'm feeling so hot right now. I don't know what to say. I'm experiencing abundance." Her staff, who were initially very ambivalent about Karma Kitchen, had been totally transformed by the volunteer crew and ambiance of goodness. She decided to divide up the surplus into small amounts and deliver it to her staff as their kindness budget for pay-forward acts of kindness. If you met Ela, you'd immediately see that this is a woman who would say yes to hosting Karma Kitchen in an instant. By the end of the day, she confidently repeated to everyone, "We're hosting Karma Kitchen once every month." 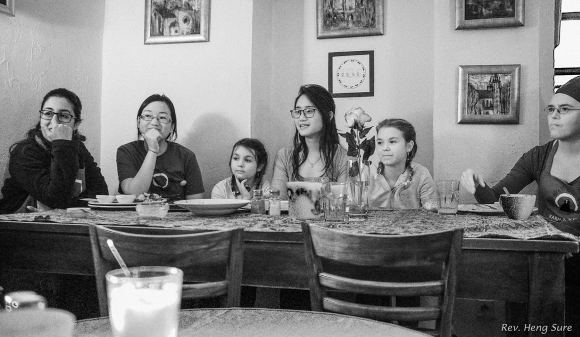 Our closing volunteer circle was as beautiful as the day. After standing at the 1-person dishwashing station and literally spending the whole day washing dishes, Rebecca remarked, "I would finish up the dishes and then look back and another huge stack! But I knew that around each of those plates was a lot of transformation, and it made me so happy to play little part in the process." Robert was serving outside, but originally said, "I'm not really comfortable going up to others." He described his typical day as home-work-gym-home, with little community engagement and lots of screen time. By the end of our day together, he said, "I'm feeling so much adrenaline, or something, that I just can't eat." 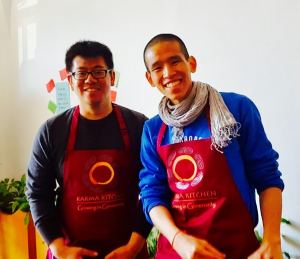 Jasky, from France, was also delighted to experience after having heard about it from many others: "I was amazed to see how quick the transformations were. Everyone was in smiles at the end. Long time back, I had a dream one night of Karma Kitchen in Paris, and perhaps I'm the one who has to make that happen." :)

Connie, another rockstar volunteer who incidentally lives in the Bay Area, said, "You guys don't know this, but I complain. No, really, I'm complainer. But when you're spending the whole day serving and thinking about others, the question of your unhappiness doesn't even come up! I can't wait to volunteer at Karma Kitchen Berkeley!"

As a seasoned anchor, Sheetal spent the majority of the day filling in the gaps and seeding ripples. One couple heard about the concept at the door and remarked, "This is amazing. We're already full, but we'd like to donate." Khushmita greeted them, and replied in her joyous way, "Well, unfortunately, there's no way to donate. You have to have a meal to pay it forward." "Okay, fine, then we'll come in to eat." Wow. :) They had some dessert and tea, conversed with the servers, happily flashed their smile pins, and made an offering at the end of their meal. Right as they were leaving, Sheetal intuitively yelled out, "Wait, wait. Just a second." He grabbed a "heart pin" and offered it to them. Immediately, they stopped in their tracks. The woman, then, slowly shared, "Today is our 34th wedding anniversary." 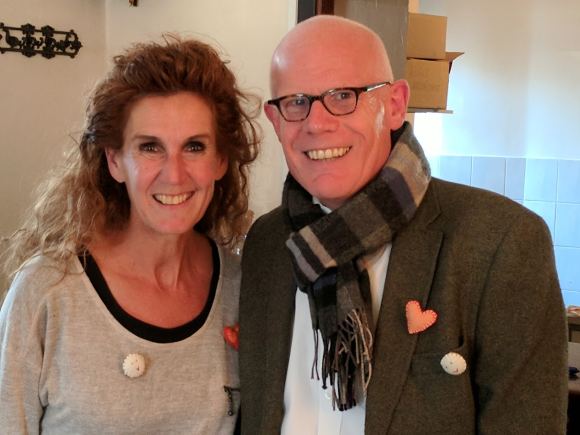 Of course, we couldn't leave it that. :) They were the last guests to leave, so our closing volunteer meal was going on in the side room. Like a rustle of leaves, the news about their occasion of joy spread among the volunteers. "Ok, you stall them." "Grab some flowers." "We should do a song. Which song?" "Maybe a group hug." In 60 seconds, the love warriors ad-hoc'd a plan to make their day. We invited them in, said a few words, and Rev. Heng Sure took out his guitar to play "Dedication of Merit", inviting them and all of us to pay-forward our gratitude. Not only was the couple in tears, but one of the staff -- Veronica -- who had been providing cooking support the whole day, couldn't stop her tears.

The couple's gravitational pull to contribute -- triggering the sacred reciprocity of love, the spontaneous serendipity at the exit door, the 60-second heart-storm by strangers, tears and smiles of joy -- and ultimately, the silently and invisibly paying it all forward. That just felt like a perfect ending to a magical day. 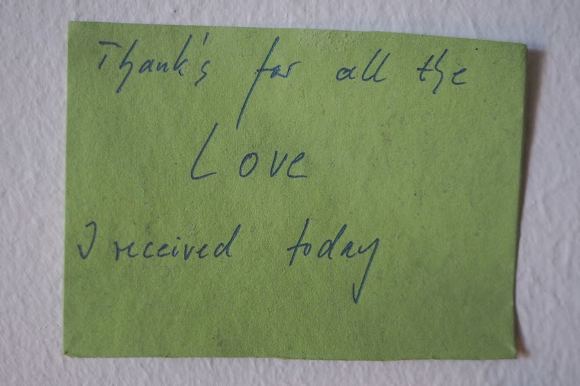 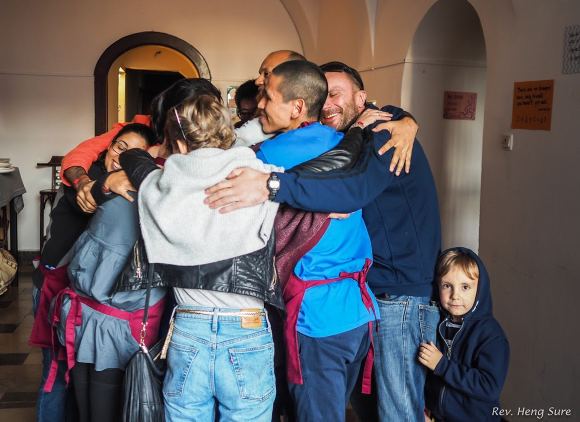