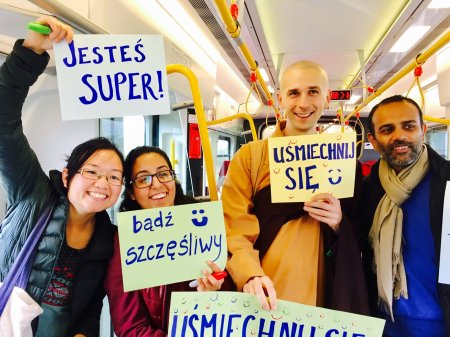 Signs in Polish, from Left to Right: "You are super!" "Be Happy" "Smile" "Smile" [more photos]

Over the last week, few of us have been in Poland, with Rev Heng Sure, Jin Wei, and a crew of monastics and laypeople from their community.

Couple days back, we were visiting Warsaw's Old City, and at the remembrance of a friend's birthday, thought we'd spend the afternoon spreading extra smiles in our friend's spirit. :)

Hopping on the train, we asked our Polish friends for translations of words like, "Smile," "Be Happy," "Have a Nice Day" and "You're Great!" and started writing them out on paper. With that in the air, the energy was already infectious. Along the way, we had bunch of chocolates and Polish(!) smile cards to give away. While waiting at the subway platform, one of us offered an elderly woman a chocolate and a smile card. She smiled and refused. Then, one of the monks noted, "You know, one time I was at a conference and we wanted to gift books to others, so we asked them by saying, "Would you allow us to give this to you?" There's something disarming about that -- inviting people to allow you to give. He took the chocolate and smile card, and went up to the woman, and her smile widened and she accepted the gift. :) Couple minutes later she whipped out a bag of candy and eagerly offered it to us. :) Later on, that same monk reflected, "Sometimes we only smile with our mouths, but when we smile from the heart, it reflects in our eyes."

We arrived at the meeting spot outside a subway entrance where we were meeting half the group, and as we were waiting, we couldn't hold back-- and held up the signs for people to see. I was holding a sign that read, "Milego Dnia!" ("Have a nice day!" and one woman came out of the subway, took one glance and gave me the warmest hug ... which then turned into a group hug. :) A couple with two young kids brightened at the signs and Khushmita and Sheetal instantly took out smile pins and pinned them on their shirts.

Throughout the afternoon, as we went from one site to another across Warsaw, there were opportunities everywhere to connect in kindness and wish people well. One young woman in our group, Connie, had a bit of a conflict with our guide, and as we stopped for a bathroom break at a cafe she decided to buy him a sandwich. Upon gifting it to the guide, he said, "Wow, I was just starting to feel hungry!" Then as we walked on, another small crew of folks snuck off to a cafe and came back with a cup of coffee for him! :) We received hugs from people sitting at cafes, simple exchanges of well wishes along the streets, and even some more candy from a crew of aunties!

At one point, we walked by the president's home, where there was a group of people protesting at the gate. "Everyday, there is one protest or another happening here" our guide informed us. Noticing that we were already carrying our smile signs, as we walked by, we just held them up, and it was sweet to feel how a simple smile -- a simple gesture of goodwill -- lightened the air as the protestors and onlookers' faces instantly cracked into smiles. :)

As the sun set into the start of evening, our group headed over to another center for an evening lecture. As we were walking, Jin Wei remarked, "Operation Smile Complete!" :)