In Week 2, the 2017 Summer Interns (Maya, Apurva, Isabel, Shyama, and Sophie) all dived deep into a difficult, but juicy topic: "Moral Action"!

Nothing ever begins where it begins, and neither did this call. Before it, many invisible seeds were planted in discreet email exchanges, phone calls, and lots of smiles and hugs. Each of the interns upped their practices - doing an act of kindness a day, sitting for 10 minutes in the morning and the night, and making space for facing one of their fears, however small. We then gathered for a wonderful call at 2pm PT on a Thursday - see the smiling faces: 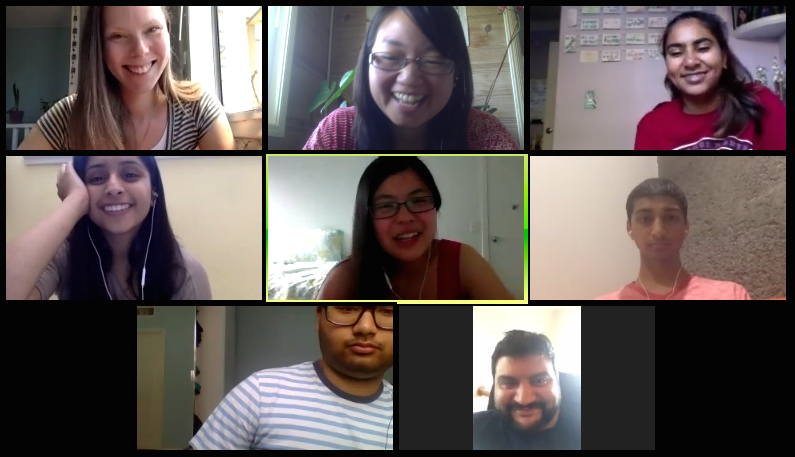 Anne Marie opened our call with her warm presence, and seeded the space with some tidbits from the reflections!

From Shyama - people develop their morals through their life experiences, and their decisions reflect their morals. It's not so cut and dry!

From Maya - everybody is fighting a battle, and we may not know what that is! How do we approach people non-judgementally?

From Priya - When something doesn't feel right, there's a visceral sensation in the body that tells us!

From Isabel - An acronym!


And it spells kindness!

An Act of Courage

Seed Question: What is an experience you had where your moral compass was challenged? How did you respond to it?

Audrey shared how she was on a plane, and it was really full! Audrey had a window seat and a flight attendant came over and asked "Is anybody willing to change to this middle seat? I'm trying to seat a mom and her infant together." Audrey was saying how she felt tired, but she decided to step it up and said "Oh I can trade!" And there wasn't even space for her bag in her new seat! In the theme of moral action - it's this question of "what's best for me, vs. what's best for someone else?" And she was saying how being grounded in this internship helps her be committed to pushing the "corners of her laziness"

Apurva shared how the "true morals" come out when something tragic happens. He was laying down some deep wisdom about how when he noticed himself feeling selfish, he was constantly trying to change that. What he realized is that his morals are capable of changing! He found that he can change his values and that shifts his morals and his thoughts and actions.
How wonderful to see that just in 2 weeks, the shift is already happening in a deep way!

Another one of our interns shared a thoughtful story about trusting friends. After 6th grade, her friend group changed - and all her friends were telling her "Oh, let's leave this one friend. None of us like her." Although the girl these friends were talking about wasn't her favorite person either, watching her friends try and run away from this girl caused a shift in her, and she decided to stand by the person that was being ditched. This happened right before summer, and come the next year, she now felt lots of fear - will I still have my friends? She experienced a lot of grief and found herself not taking a stand for other people as much and distancing herself from the people around her. But now, she's starting to trust friends more, and she's found some good ones! What a response to a situation we've probably all been through :)

From Anne-Marie - how do you overcome the pressure from peers?

Actions speak louder than words - Maya committed to a week of no gossip about anybody! And she learned that she could do it, and she told all her friends about this practice and they respected it. A true testament to the power of determination, and noble friends :)

Shyama's been under pressure while working at Jamba Juice! When there's a rush, she's only got 3 minutes to make her drink, but sometimes the crowd is so large and the stress so high, that they make mistakes, and a customer might receive apples instead of strawberries or mangoes instead of pineapples. Instead of excusing herself for that small action and shrugging it off with the justification that they can't tell the difference anyway, she went to the customer and said, "Hey I made your drink wrong - let me make it for you again." If not curbed, these little things add up and we start excusing ourselves for bigger things! She is grounding herself in the smallest of actions (like washing a dish properly, or giving 100% of her attention to a friend), so that she's prepared to tackle the big ones, should they arise. What wisdom!

Sophie tried to overcome her fear of saying "I Love You" to her father - she had journeyed to study in another country when she was 15, and the distance has made their relationship harder. Her father also works very hard, but Sophie knows the love was never absent. So for Father's Day, she mentioned that she wanted to break this barrier between them - they both know that they love each other, but both of them are afraid to express it! When contemplating what her father might appreciate for Father's Day, she immediately discarded the superficial, like flowers, and went straight for the heart - she wrote him a letter starting with "My Dear Dad" about how much she appreciated and loved him. This was a huge step for Sophie already, but it didn't stop there - she also offered her dad the most precious book she had - by Rev. Heng Sure (a great teacher and role model for her). The day they received the package, Sophie's mom called her and said "Your dad has been laughing all day today. He's very happy." Way to step it up!

Anne-Marie shared a story of how she had to decline care for someone, because she couldn't be in the space with the patient because of the little one growing inside of her. This was hard for her, because she took an oath, and it felt like she was breaking it, even though there were other nurses who could take care of the patient. Ultimately though, she had to face her fear, and realize that the baby came first at that moment, which is also someone she's taken an oath to care for :) Anne-Marie's noble friends helped her weigh the pros and cons of the decision and helped her come to terms with it - how great to rely on them! But it went against her own moral conduct - these situations are all just so complex and challenging.

Amit-bhai: Why don't we give moral action more importance in the society at large?

Maya - When I know what I'm doing or seeing is wrong, I can feel it and that spurs me to act. Amit-bhai adds that Birju-bhai is trying to be really aware of his feelings and listen to his inside voice, and not let fear take over - a great practice for all of us!

Apurva - 70-80% of people in a Gallup poll feel that moral action has gone down in society, and the same number of people feel that basic civility is also eroding! A baby step - just be civil to everyone. It may not be an answer to the deep questions, but it's a place to start.

Audrey - One of our local community members was remodeling his house, and shared at an Awakin Circle how he saw only doorknobs and cabinet styles for some time. How much of what you see is through your own lens versus true insight?

Sophie - We are inherently good, but we get distracted by greed and desire, by distorted perspectives of what love is, despite having the deepest truth inside us. Rather than being attracted to moral action, we're attracted to a thousand other things out there. How can we feel the connectedness between us? It starts from this kind of environment - virtual, but space nonetheless. How do we do this for society? (Hm... great question to hold! :))

Anne-Marie - What if you see a homeless person and you can't stop to help?

Shyama - This happens every day at the stop light! What if the people behind you need to go somewhere - maybe you're making it easier for the people behind you to go to work faster. Many times we have to make a split decision based on our morals. It's best to try - don't be controlled by the fear of being late!

Amit-bhai: Things seems simple, but as you peel back the onion it gets more complex! There are so many competing decisions - sometimes we rationalize what we've done rather than confront ourselves clearly. The more important thing to do is reflect and build clarity so that when you have to act, it's not even a decision!

Maya - There's a co-dependency between actions and morals - and actions speak louder than words, even internally!

Audrey asks: How can we think about the long run rather than the short term?

Shyama - We want the feeling of happiness, and we don't want to wait for it - there's always this fear that if we don't choose our immediate happiness, it'll never happen for us. In most cases, it ends up being bad in the long run (eg candies and cavities!). It's hard to distinguish, but clarity on morals really helps.

And Maya asks a hard question at the end: "So you practice your values, but how does that connect to moral action? What's the difference between those?"

I'll leave that one as an exercise for the reader :) If you feel so inspired - share in the comments! I'm sure the interns would appreciate the wisdom.

It's always so humbling to sit in these growing spaces - I feel full and stretched open from all the vulnerable sharing, happy smiles, and earnest approaches to these difficult questions.

How blessed we are to have noble friends.