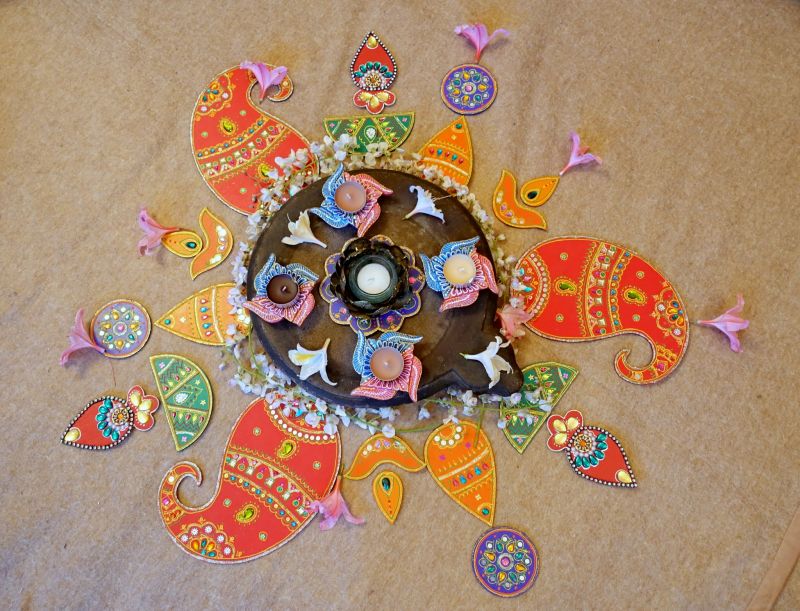 "The bee drinks gently of the blossoms of the tree, hurting not the flowers and yet deep to its heart’s content." --Prescriptions for the monk in Dasavaikalika Sutra, 1,2

When we heard from Sheetal and Khushmita that they were coming to London, I immediately felt a connection to a number of positive emotions and memories. I had met them at the inspiring and thought - provoking Gandhi 3.0 retreat.

The invitation from both Nipun Mehta and Jayeshbhai Patel had intrigued me and given me a great sense of privilege to be invited into a circle of such tremendous souls. I cherish those days, the many insights shared and the many thoughts provoked. I was moved by the spirituality, expressed in multiple ways, which sustains the multitude of selfless offerings of the great souls gathered. The many volunteers worked with such joy and love.

At almost every session I encountered Khushmita and Sheetal and both of them served lovingly and joyously. We built a connection. I also learned of Sheetal’s love for mystical poetry when he connected my name to that of a Turkish poet, and this love is reflected in Maitri Tunes. When I learned about their beautiful offering called the Urban Ashram, I was also, again moved and inspired.

The idea arose of hosting an evening celebrating this connection to devotion and to make or renew a connection between ServiceSpace ecosystem and a few of the circles in which I am engaged: a spiritual circle around our Guru Nalinbhai Kothari, affectionately known as Bhaishree, work with the Jain faith community, some interfaith circles and our new Service Space family, to name a few. There is much alignment, as Trishna and Ani observed.

As soon as I spoke of this wish to Nilpa, my wife, she, too, was encouraging, and I reached out to express an interest in the hosting of an event. Sheetal immediately wrote: “Would love to have an evening of songs, stories and stillness,” and the circle was given a name. Gently guided by the experience of Sheetal, Khushmita, Trishna and Ani, the service space family, Nilpa and I witnessed the seed take root.

I felt within me a great sense of satisfaction from the moment that the seed - thought was planted. I felt that I was somehow honouring, in a small way, the various operations of grace which had brought us to this point. A quest on how to make a contribution and what shape it could take had led me to meet Nipun and Jayeshbhai, and to Gandhi 3.0 where I gained much. I have been graced by the presence of spirituality in my life, and some notions of impact on souls around me. These encounters with ServiceSpace/ Moved by Love provided me with some frameworks and loving challenges. The quest remains and there remain many questions held, as well as a few small steps of investigation within my own ecosystems. 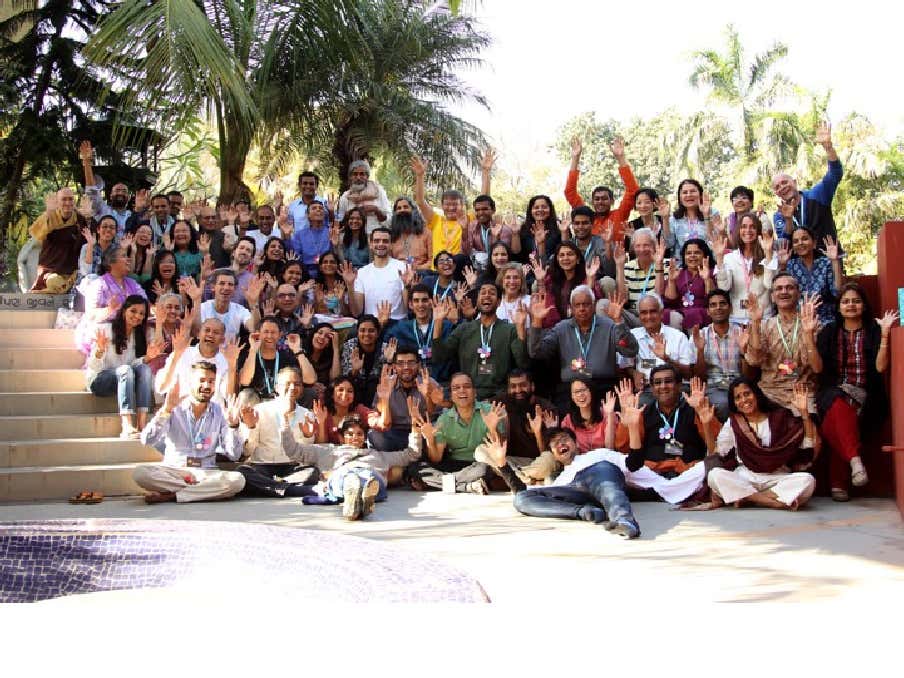 These ripples of encountering ServiceSpace and Moved by Love were gently lapping at the shoreline, and Nilpa and I stepped into this deep lake of kindness, gratitude and service. The moment we did this, Sheetal, Kushmita, Zilong, Trishna and Ani came together to co-create the circle. My parents and Nilpa worked with a positive burst of energy. We received many offers of help (especially desserts) on the day and beforehand.

So the seed sprouted and the ripples made for plain sailing.

The evening itself began with the offering of dinner and there was a wonderful sense of love and gratitude. Naturally, the many desserts also attracted much attention.

Entering into the main room, the circles of friends to be were warmly welcomed with a beautiful heart from Maanav Sadhana, created by the beautiful hands of women from the slums of Ahmedabad. Hand and heart touched head and heart, shifting minds, producing a conducive environment for the session of sitting in stillness. A deep sense of peace now filled our home, replacing the warm interaction and engagement of dinner. 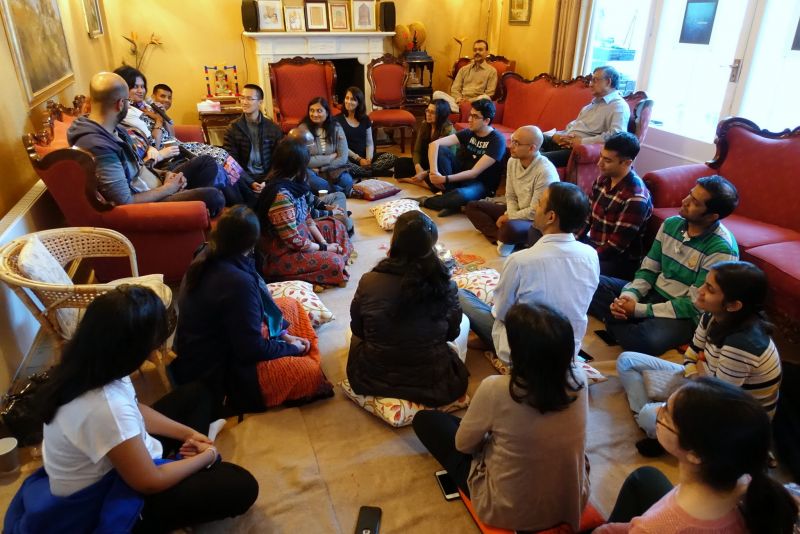 The evening was a moving set of offerings and insights into various inspirations and thought processes. This brief tour of highlights will not do their profundity much justice, but I relish the reflection afforded me by writing about them.

After we welcomed everyone, and after Trishna introduced the family members from abroad, sharing with each of us fascinating details which she had gleaned while being a fabulous host and her many years of offering service at Service Space. 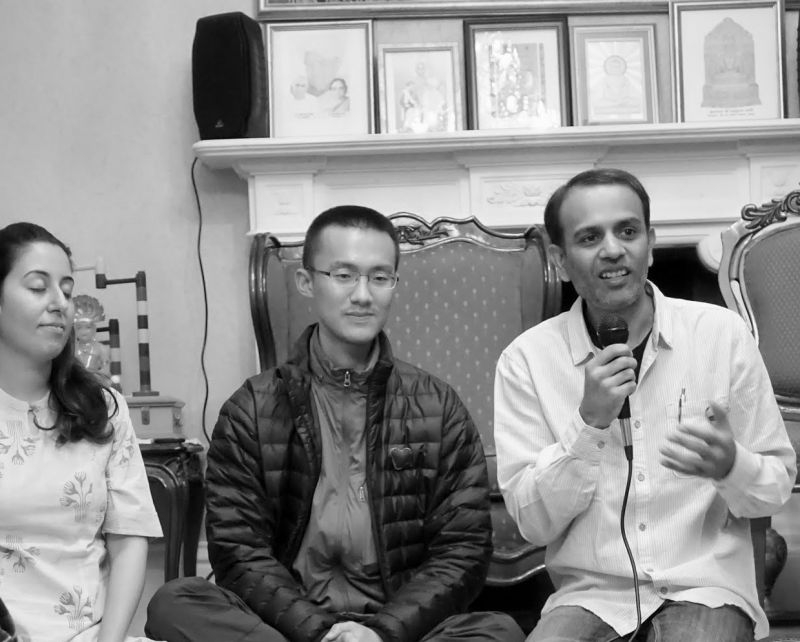 Sheetal shared some of his personal journey and about the work of the Urban Ashram. He spoke about the influences on him of Pujya Chitrabhanu and Satish Kumar. When describing our personal journeys, Sheetal highlighted that we are all on a pilgrimage and that there is a big question about why we would simply spend all our effort on this particular life, or this home, which is merely a bridge on our pilgrimage, when instead we could dedicate ourselves to a deeper ultimate objective. Sheetal also sang for us the poem by Chitrabhanuji called Maitri Bhavanu focusing on four fundamental virtues.

Zilong delighted us with his flute and then shared about his own recent travels which have truly taught us all much about the art of receiving, requiring courage and humility. Zilong mentioned to us the feeling that our home has many stories, which I guess renders it appropriate for such a circle. Throughout his sharing, we caught a glimpse of his deep philosophical understanding.

Khushmita joyfully shared a challenging question they had received, which will all do - so the two of YOU are going to change the WHOLE world? One response is that we can be the change through our own striving (Sadhana) in our own home and in our own ecosystem. A beautiful example was shared about Sheetal’s mother who seemed to have somehow hospitably fed so many in the neighbourhood including various people who came to serve the family. This had generated much social capital in the community and Khushmita reflected on how much we owe to past generations and lineages. 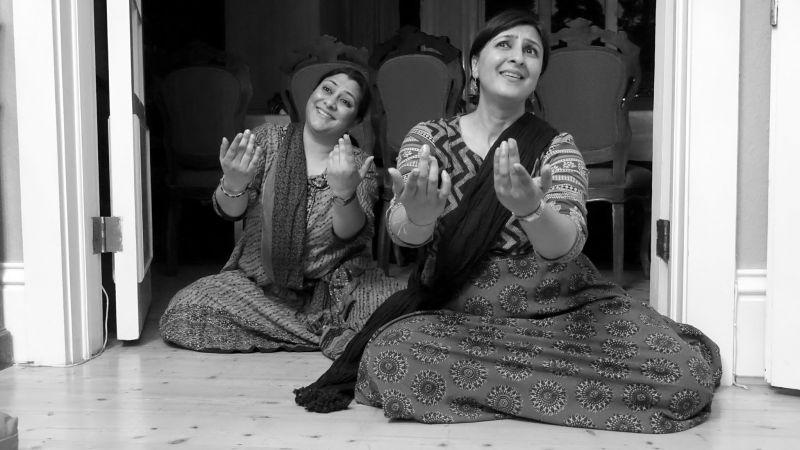 The circle then turned to face Nilpa and her sister Naytika who offered a beautiful and all-too-brief Bharat Natyam performance of a poem by the Meerabai, the mystic and devotee of Lord Krishna. The poem was was beseeching her lord to manifest himself this very day, to give her “Darshan.” Dance, lyrics, music, poet, performers all focused on a single purpose - vision and union. 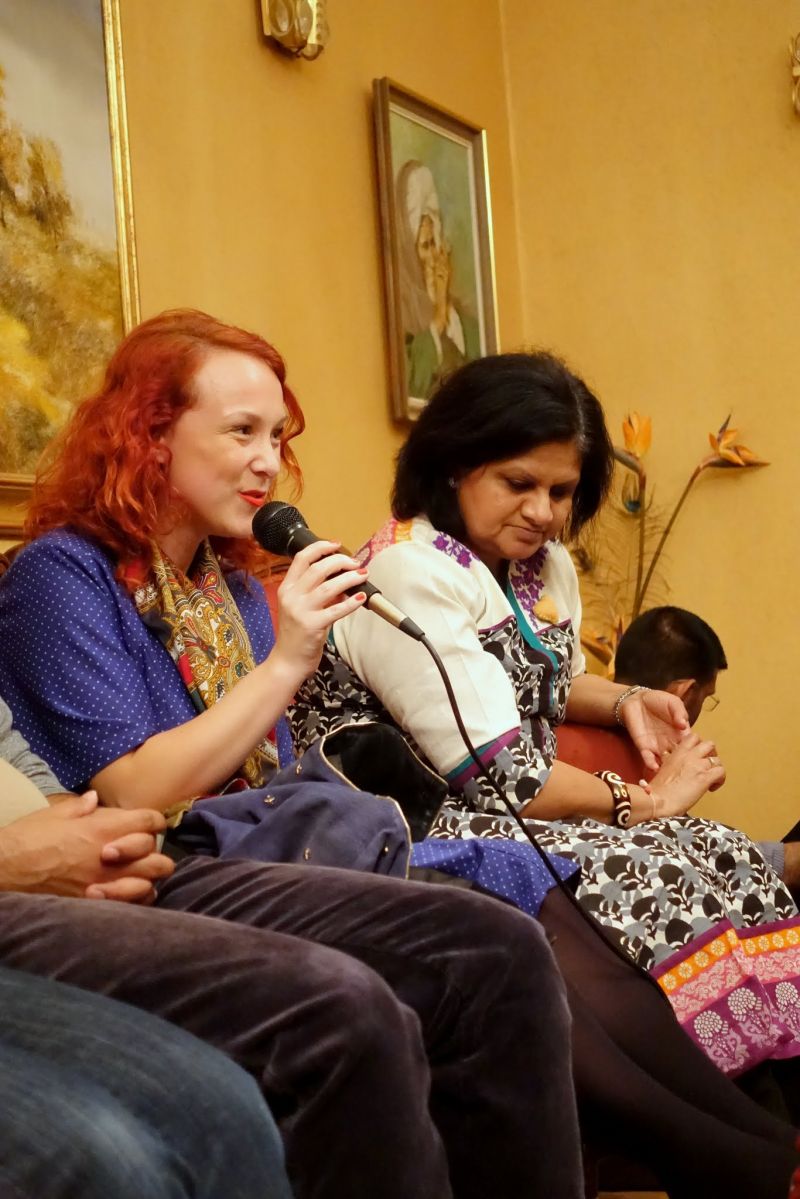 Vicky shared her beautiful journey of many challenges in early life to finding joy in service and volunteering. She encountered Shamash and, with Rosa, the three of them run the wonderful Museum of Happiness, a journey through challenges to a victorious culmination.

Palak offered us a beautiful rendition of Amulya Tattva Vichaar by the 19th century Jain mystic Shrimad Rajchandra, who had influenced many of the lives in the circle. This year marks 150 years since his birth. Connecting back to ripples, it was 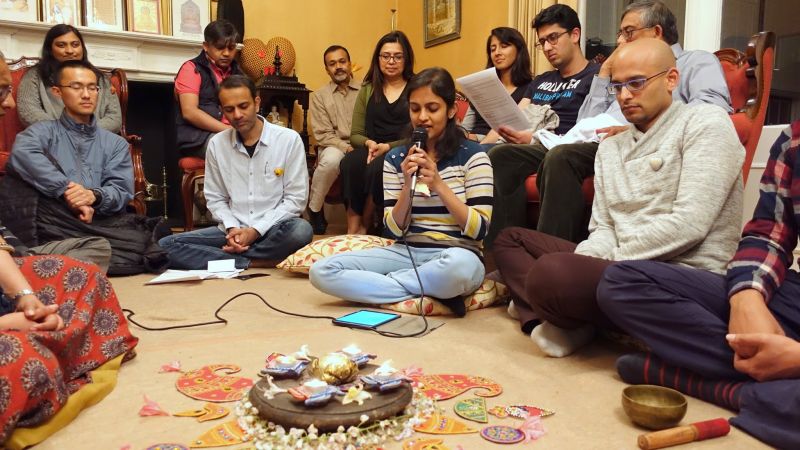 Gandhi 3.0 which had somehow contributed to this circle and Shrimad is known to have been an early and most profound influence on Gandhiji’s spiritual life. 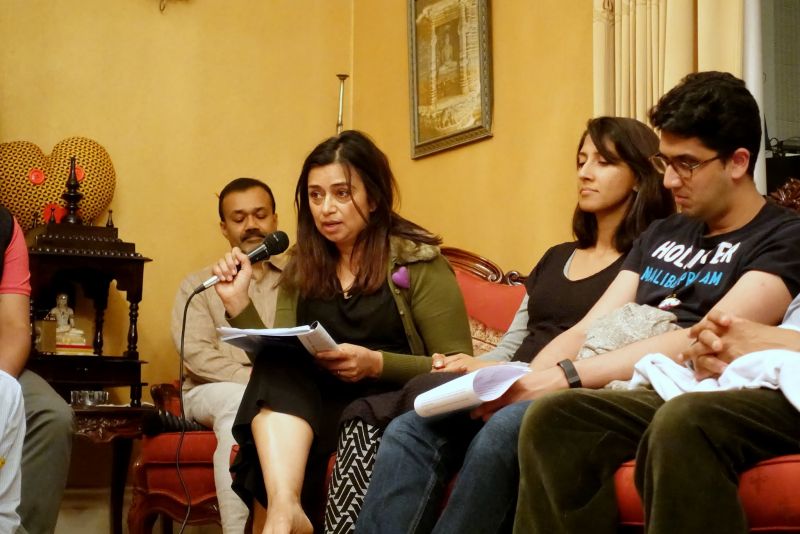 Remy shared with us her own exploration of healing. Courageously, she had stepped back from conventional medicine and explored the power of restorative yoga. Little did she realise that her sharing in the circle was to be followed by two doctors! 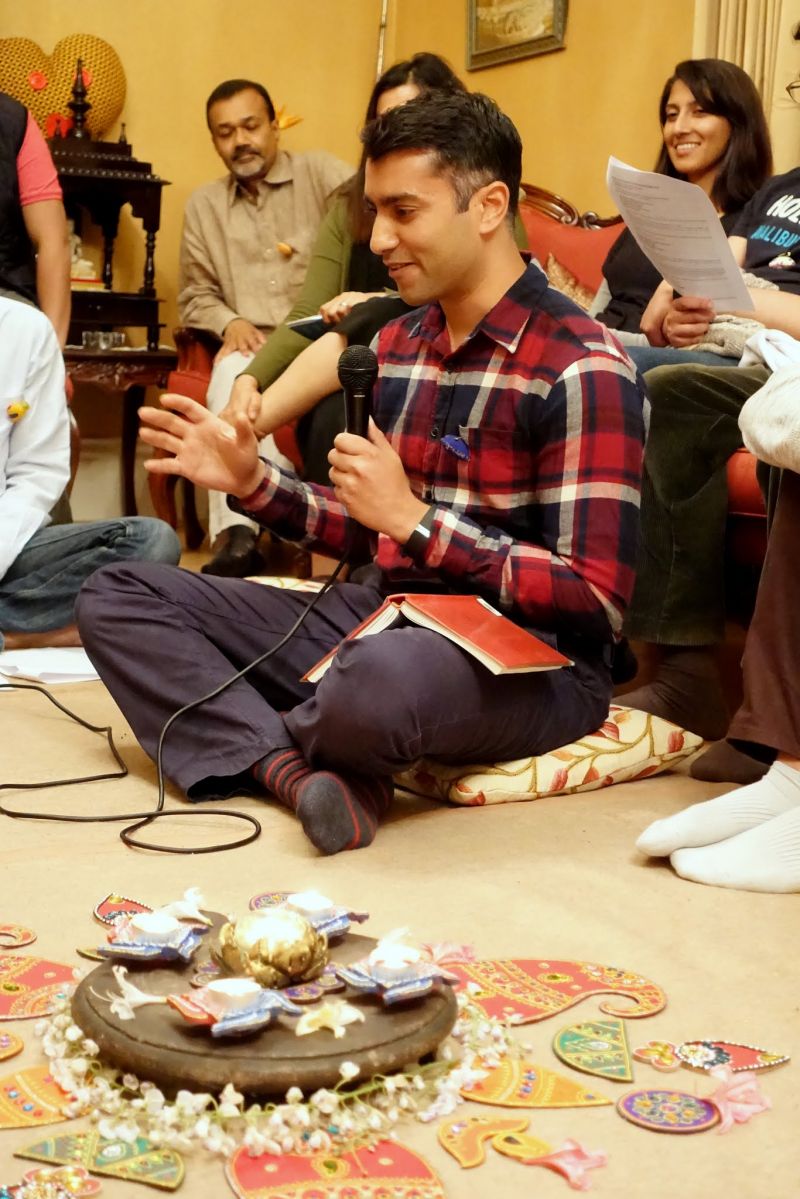 Ajay shared a journey on how, in a way, he had found a voice. It was in service to his Guru that his talent for singing devotional songs was identified and this became a deep way for him to explore devotion connection and service. Today, he has arranged his life in such a way, that he has much time for service and his own striving. Ajay offered to us a deep and melodious recital of a poem by Kabir - sharing the regret and risk of days, indeed life, passing without devotion, as we focus on greed, thirst and frivolity, which saints have all transcended. 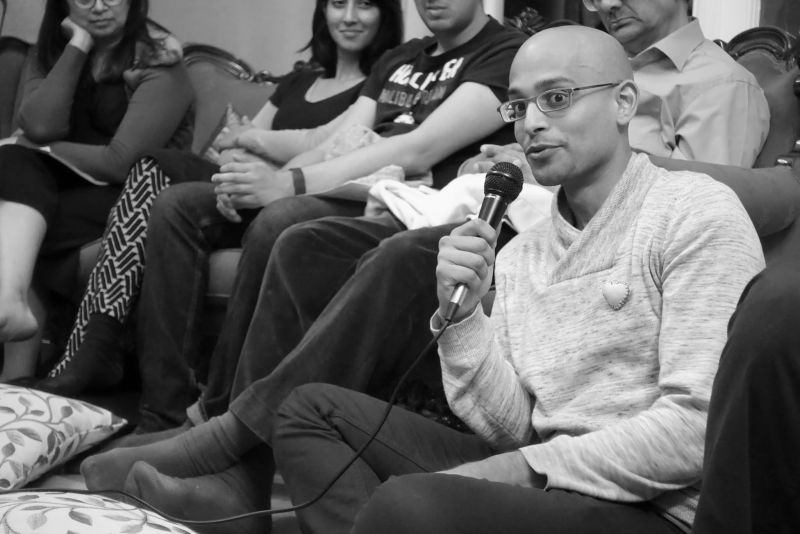 Sagar, a trustee of the Vegan Society, and economist at the Bank of England, shared his love of journeys, connecting to the pilgrimage on which many in the circle were about to embark. He movingly told the story of one Tibetan pilgrim who joyfully surrendered his pilgrimage, and savings therefor, for the relief of the suffering of a dog. Opportunities to serve often present themselves unusually. 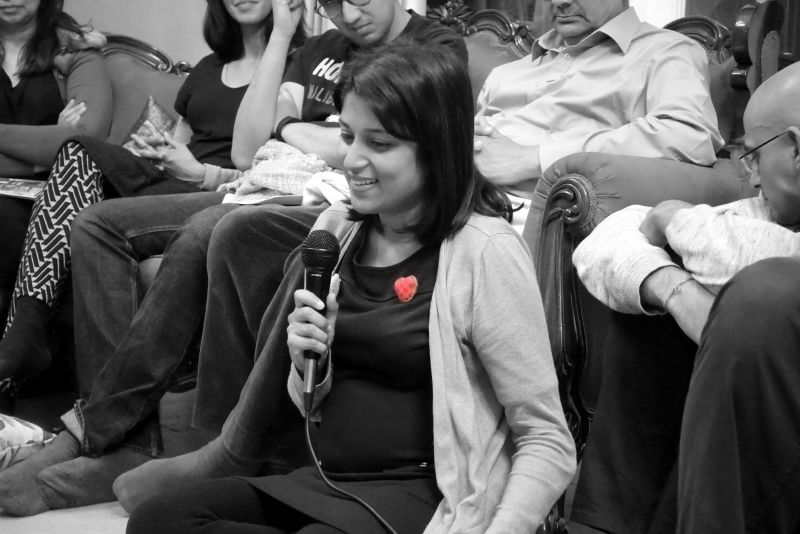 Anuja, a doctor also, an active volunteers and until recently president of Young Jains, mentioned her own personal exploration of contribution.. She had been holding the question of whether to contribute by donation or by time. She had sought advice from Acharya Hemprabha, who had recommended time, due to the transformative impact on her of service. 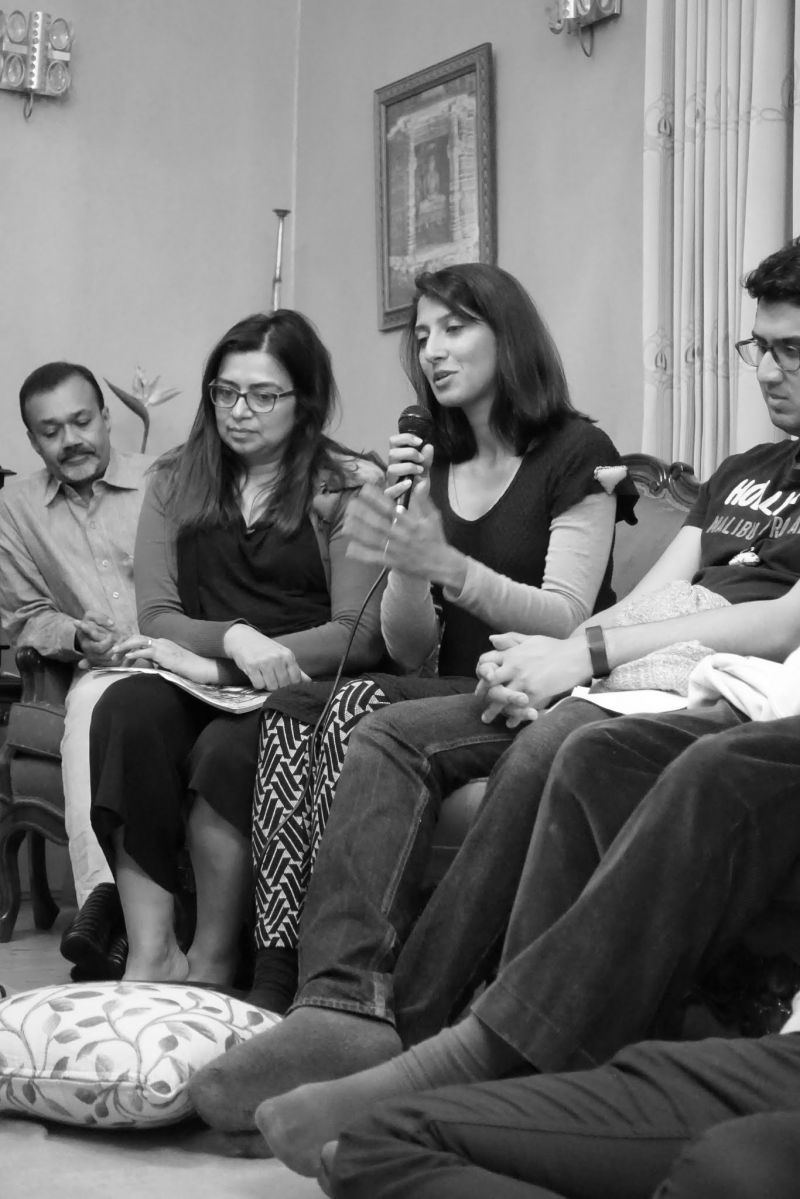 Menka, with experience in CSR, sustainability, collaboration, strategy and innovation, working with organisations such as the UN, Save the Children, various large corporates, spoke about the interaction of this journey of service with spirituality. Describing her work to her Guru, he advised her to continue it, but to also meditate. She spoke of reconciling that way the accepting ideas of “I am enough” and the “world is enough” with the inspiration to go out there and make the world a just that little bit better. Discussing the challenge of how each of faces the enormity of problems around us and the seemingly small impact of our actions, Menka shared the story of the starfish, where our action makes “a difference to that one!” 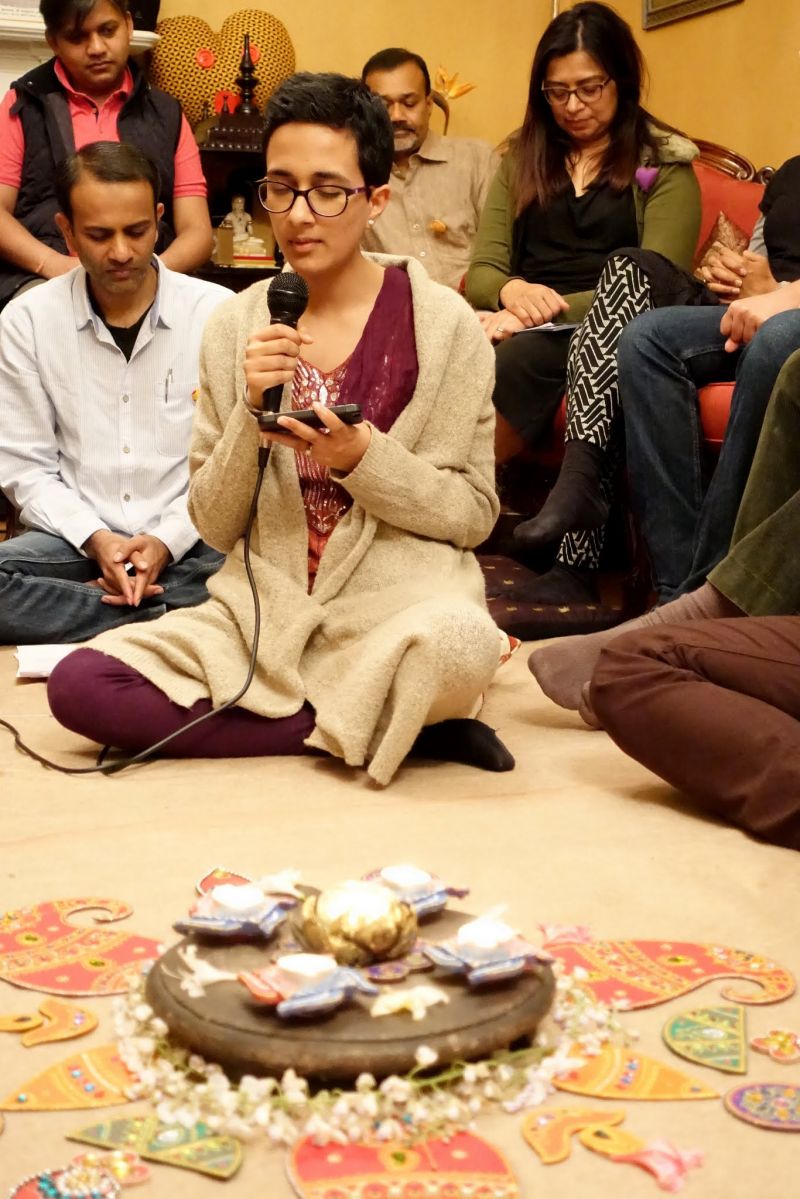 Paarul’s was the last offering. Professionally a teacher, her classically trained voice movingly sang the mystic ascetic Andanghanji’s “Re manaji”, which explores the passing of time, the importance of devotion and also subtly and simply guides us to identify the ray of our awareness in everyday action.

The whole session ran on for longer than anticipated, and yet most remained utterly focused and attentive throughout. There were many who were moved to tears by the various offerings. The energy of the room after closing was wonderful, with many enthusiastic conversations and, I am sure, many ripples.

Here are some beautiful pictures which Trishna so kindly took on the day.

On a personal level, Nilpa and I experience much joy in the coming together of the circle. It was a joy to work with Trishna and Ani. \We were excited to learn from Khushmita, Sheetal and Zilong. We were moved by the wonderful support we received from friends and family alike. Our respect for those regularly hold circles, be it the service space circles in Santa Clara, the three London Circles, those in Pune and Ahmedabad, and our respect for those who hold other satsang circles has grown.

It is difficult to think in terms of the duality of guest and host. We were moved by the encounters at Gandhi 3.0 and a great sense of alignment to open heart and home and by doing so, we received so much and continue to do so. 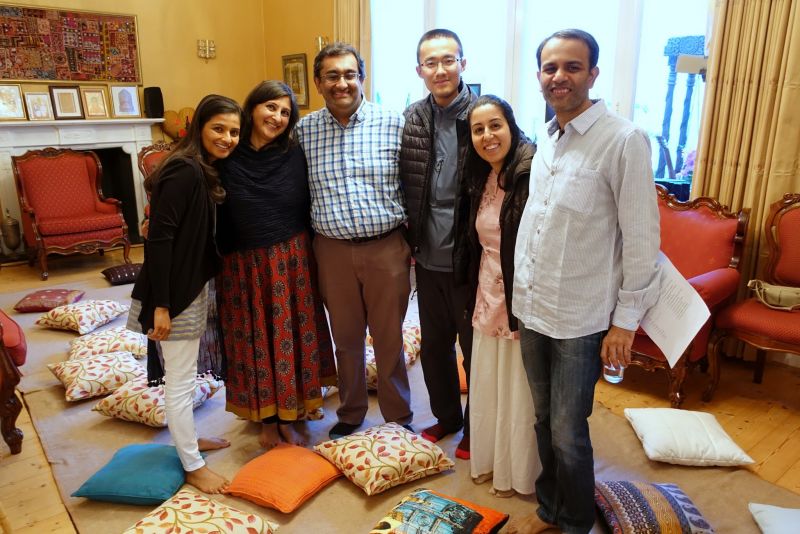