[A day prior to the start Gandhi 3.0 retreat, Ari Nessel spoke during a beautiful community night at Ahmedabad's Seva Cafe. So many of us were very moved by that talk, and some volunteers offer this lightly edited transcription, to share the inspiration forward.]

Many years ago, I was on a meditation retreat and we had a great manager who was serving the retreat. He just had a sweet smile the whole 10 days that I was there. During the retreat I had shared that I really liked his shirt. He had this shirt which read: "Be Happy."

Later, I learned that this young man traveled from retreat center to retreat center, sometimes meditating and sometimes serving. "What happens when you need some food or money," I asked him. With a casual confidence, he replied, "Oh, it usually works out. I take odd jobs here and there. Usually someone offers me something. Whatever I have, I just try to pass it on and it comes back in its own way." And then with a pause, he jokes, "Really, the only material thing I have an attachment for is this shirt."

Funny thing. That night, I had a dream about me taking this shirt from him! :)

Even funnier thing. The next morning, he comes up to me with an offering, "Hey, I want to give you this shirt."

I humbly accepted his shirt but within myself, I was like, "Geez, I'm really inspired. I need to do something to pay it forward. Not just something generous but something really vulnerable." 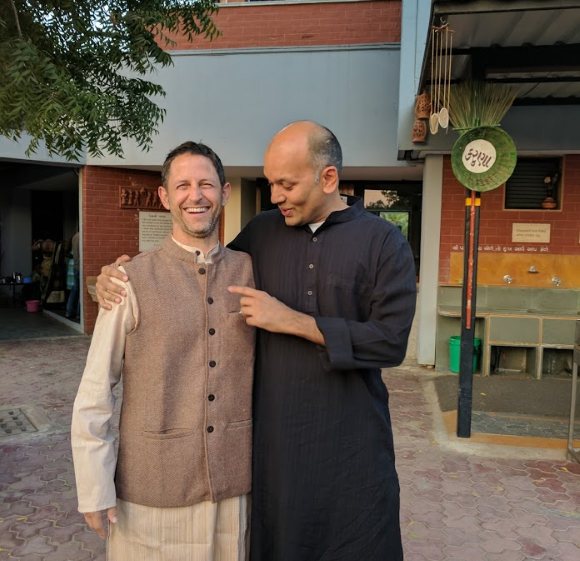 That same morning, right before leaving the retreat center, I went to offer a donation to the retreat center. As I signed that donation check, I wrote another check. On this second check, though, I didn't put any dollar amount. It was a blank check.

I went to my Be-Happy friend, and said, "This is for you. There is no amount on it, but just keep it as emergency. Whenever you need it, write in whatever amount you need."

With a half a bow, I added: "Thank you for being a teacher. You stepping into your vulnerability allowed me to step into mine. I'm grateful beyond words."

Smiles From 29 Members Login to Add a Smile