It is the little things. The little things that catch your eye and insist that you pause. “Welcome Home” said a beautifully hand-drawn card on each of our beds at the retreat centre. Inspiring quotes decked all walls, including those of the bathrooms. We wrote in notebooks with hand-drawn covers. And were tagged with anonymous messages and gifts.

All the rooms had names, as did the buildings. We met in Maitri hall, my room was called Karuna. Inside the hall was more beauty. The little touches once again. A circle of chairs and cushions and in the middle a beautiful white-chalk rangoli of a tree with flowers and diyas. On the inner edge of the circle, right by the floor mats are words: “Pilgrim”, “Planting seeds”, “Serve”, “Kindness”…

It is easy when one meets a person with disabilities to notice what is “different”. The dark glasses, the wheel chair, the facial expressions, an inability to speak. What is much, much harder is to go beyond. To learn about the tree of that person’s life. What values form his or her roots? What is the network of family or friends that creates the trunk of support? And very rarely, (because disability is often met with either derision or sympathy), does one get to learn the fruits of the person’s tree. 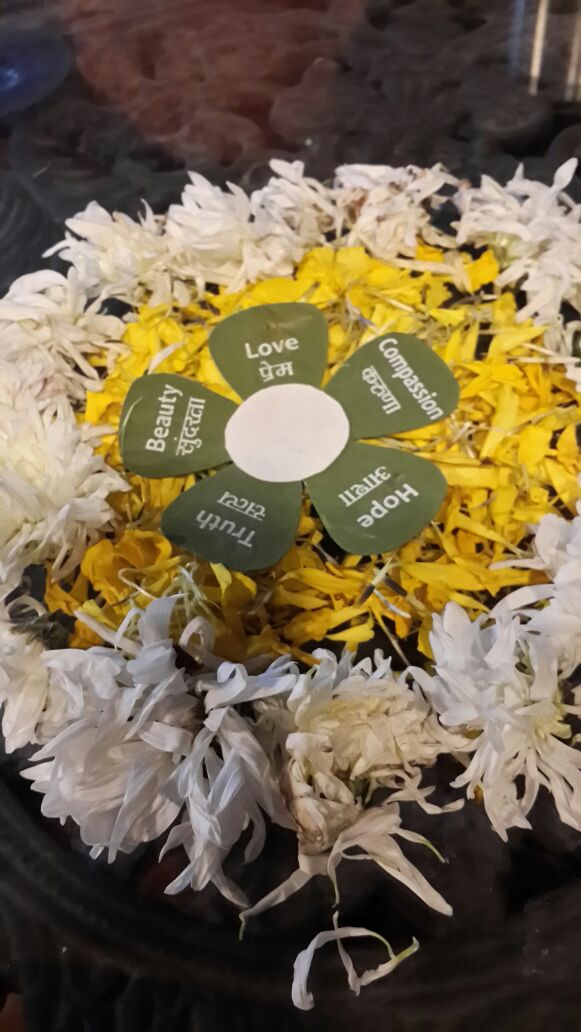 Everyone is good at something. We all have something to give. And that ability to give, to serve, resides in us all.

*An atmosphere of trust allows for confidences, for the raw stories of struggle that sit behind the good cheer. It is a building of spirit, a conquering of obstacles on an every-single-hour and day basis; something that never makes the news.

Prabha, awaiting her second baby being told by a callous doctor, “He will be a vegetable.” It is of her vow to change his harsh words that translate into so many actions including hours of sitting on the sidewalk outside school, to help her son, Ashwin to simply go to the bathroom when he needed to.

Of Bharat’s extraordinary friendship (and what many would consider as sacrifice), with Ashwin. 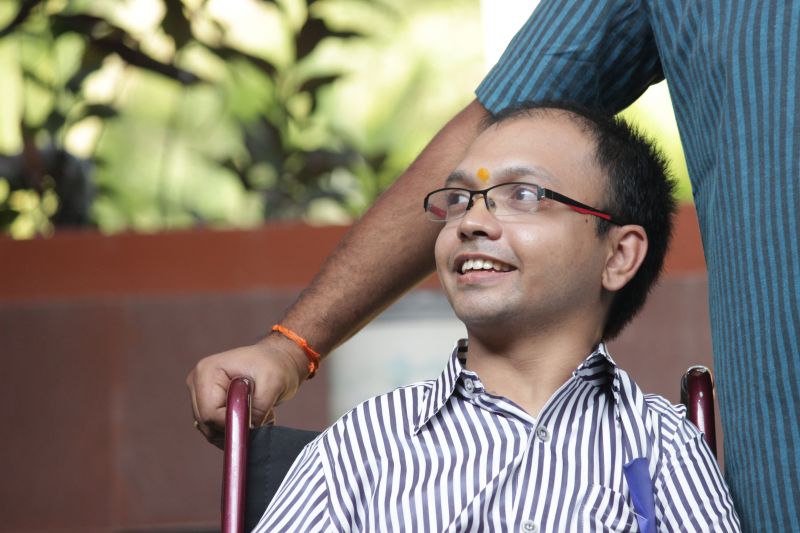 There’s Kiran whose brightly coloured clothes match her energy, who fought with her family and insisted on a job and independence. “I am blind, but my mind is not blind,” she says.

Meera reads us stories of grit and perseverance of th 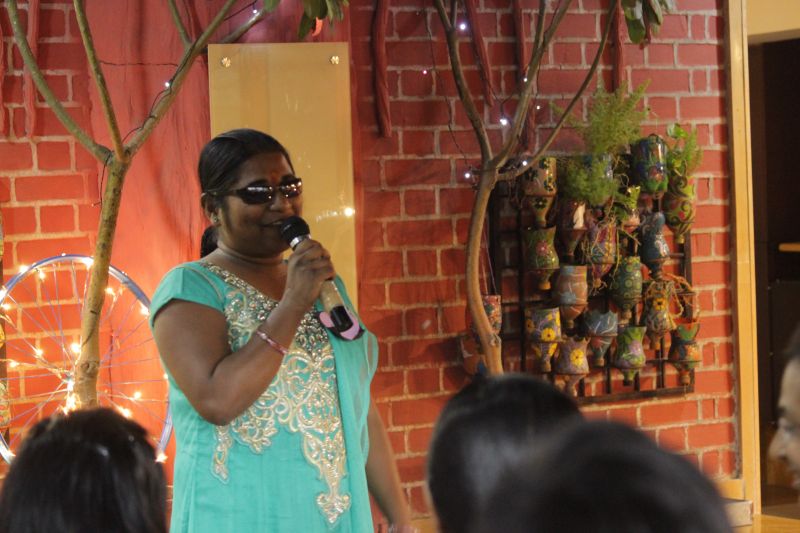 e differently abled from her book, You Can.

There’s Ramesh bhai, who walks on his hands, follows his heart and, in a chance meeting with Ragu bhai decides to swap a call centre salary to continue Ragu bhai’s work of selfless service.

Nirav who at the cusp of adulthood had an accident o 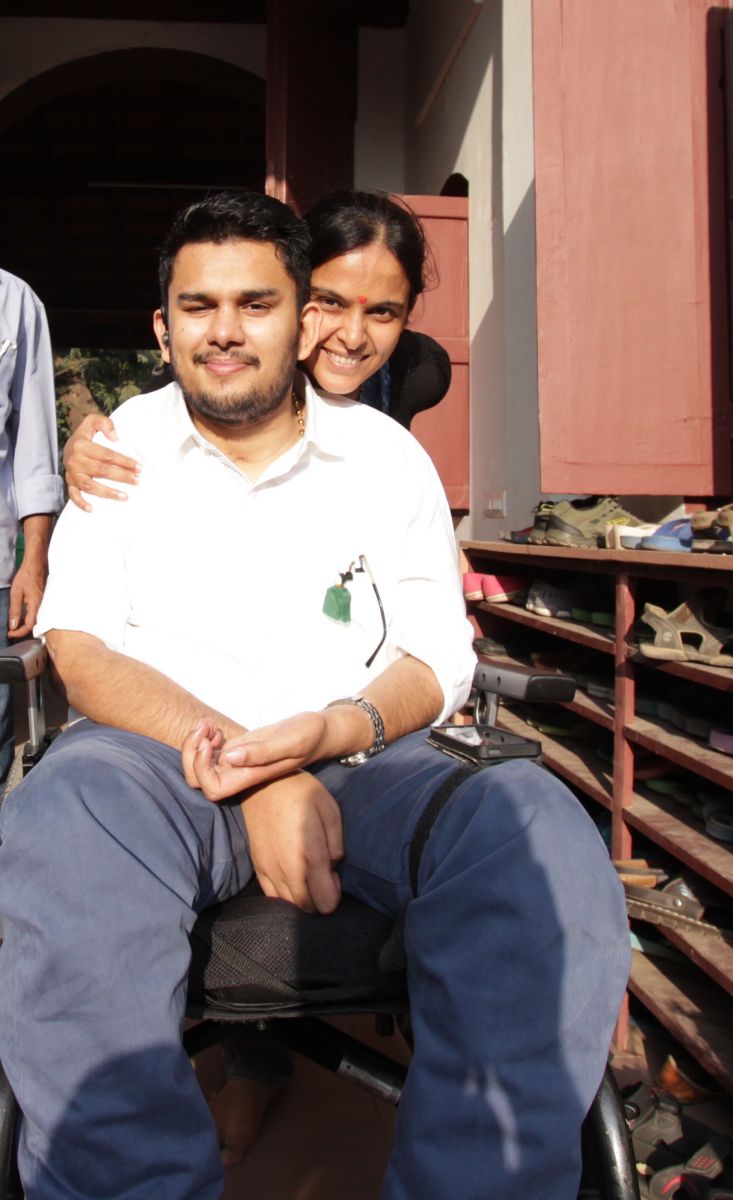 n the Agra-Delhi highway and never walked again. Instead of sinking into depression, he wheeled out of the operating room with a smile. He said, “I realized this is my second life, I want to make it count. I want to serve people.”

It takes your breath away.

The strength of a gathering lies in the depth of stories shared but also in the teasing. It resides in laughter that is loving, not harsh.
Khusmita and Trupti led us in great ice-breaking exercises where we got to shake, yell, and belly-laugh wildly. Gopal, Tapan, George and Meera took us through a series of sensitization sessions that had the usually ‘abled’ struggling to thread a needle with one hand, or find our way to the kitchen blind-folded. Barriers didn’t just fall, they crashed resoundingly. 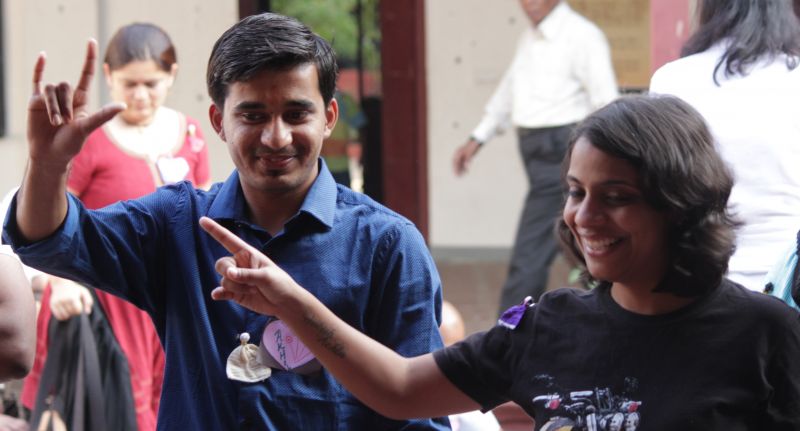 And it lead to such great joy. Nipun mock-dancing with Karan and Mansinh. Ashwin having his leg pulled about his celebrity connections. Priyanka and Swara belting out songs in an antakshari session on a bus ride. Varsha and Akil arm-wrestling. Punjabi-kudi Gitanjali, Mallu-madam Vinya, Mr. Metta and George-ous – the affectionate titles flew in the air.

Laughter linked us all.

Priyanka’s sense of space is astounding. She took her jacket off, and dressed in shimmery black rocked Seva Café with her moves. There were moments when you could hear a collective intake of breath in concern lest she bump into something she cannot see. But twirling to the music she was unstoppable. It is the same fearlessness that made her organize a cooking show by the visually challenged. And drive a bike during our retreat. “What if you fall?” Madhur asked her at one point. “So what?” Priyanka replied. “If I fall, I’ll get up, right?” 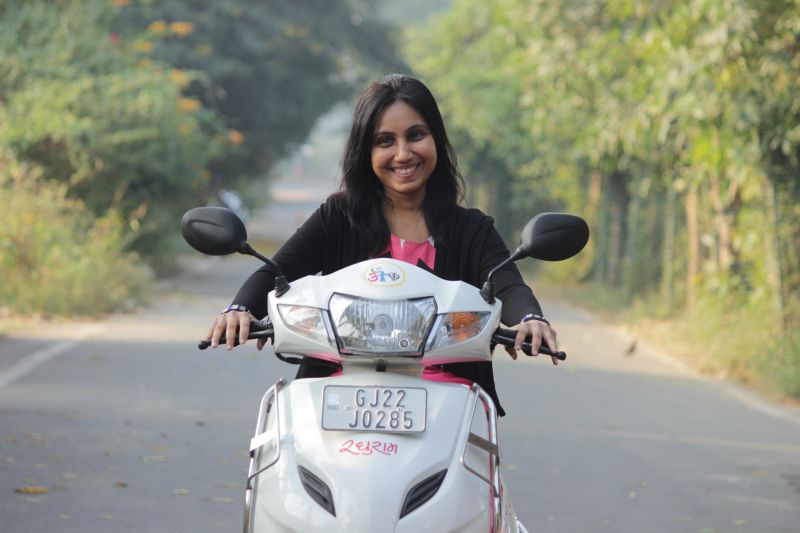 3rd December is World Disability Day and we celebrate it with music (including Nimo’s resonating songs), dance, poetry and a meal prepared with so much love at Seva Café.

Priyanka’s dancing is joined by Akil. You’d never guess that he can’t hear the beats, so deftly does he move and pirouette Priyanka around– they look like a young couple romancing in a Hindi film. And then, one by one they are all together, holding hands, bouncing to the music, each coming out for their special twirl: Karan, Mansinh, Jayanti-kaka, Akil, Priyanka, Kiran, Nirav, Ashwin, Ramesh-bhai.

Jayanti-kaka, who is in his 60s says, “Today is the first day I have danced.” And then he adds, ”You have opened your hearts and given me so much love and respect. You called me ‘kaka’ (uncle). I give you namaskars and thanks with all my heart.” 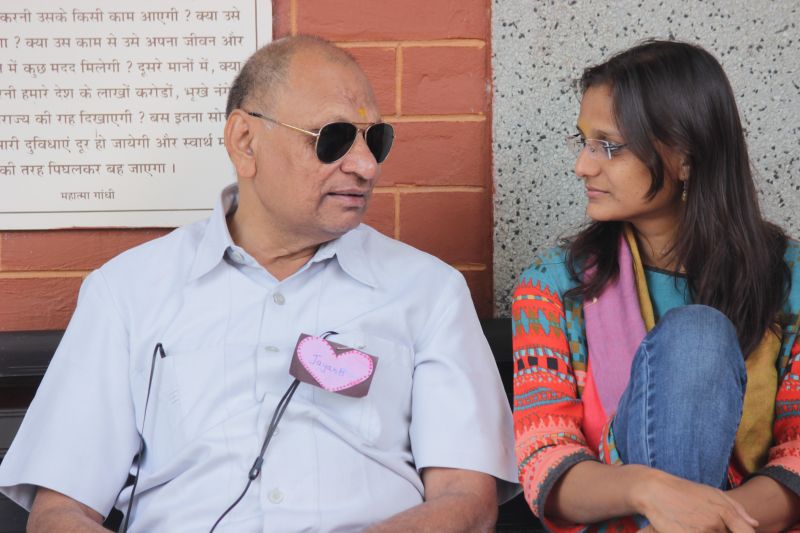 Looking at the joy and the talent that is on display, Jayesh-bhai turns to Meghna and says, “this is not disability, this is “dil”-ability.” (the ability of the “heart”.) And like many of Jayesh-bhai’s classic phrases, this one is quickly adopted.

Three steps and a pause

Three steps and… a pause. 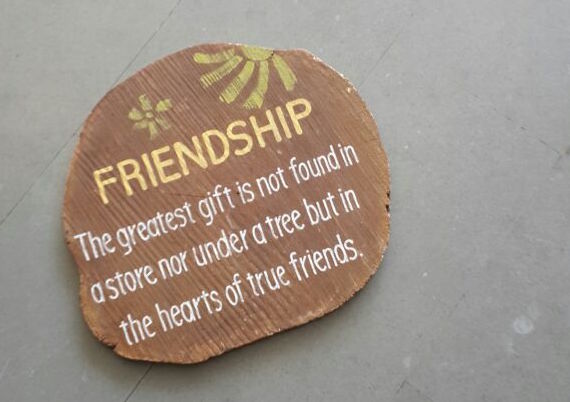 Remember the little things? The footwear arranged in shapes of hearts, the parrots coasting at the rafters? As the days go on, they get added to, slowly, bit by bit. Not just in forms of art (though there are many of those), but in human gestures. In Bharat gently pushing Ashwin’s glasses up as Ashwin reads a poem. In the continuous translation from English to Hindi done by Anurag and Gitanjali.

In how on day one Gopal and Neha were the only interpreters of sign for Akil, but by day three, most of us had some kind of conversation with him using gestures, writing on phones and exchanging meaning even if it ended in gusts of laughter at the utter confusion of languages unknown.

As we give desperate last-minute hugs, and are physically thrust into Uday-bhai’s pay-it-forward taxi to make our plane, we look back at the trees, the peaceful buildings and the silence. The words a child says to his mother in sign language (in a deeply moving film shot by Kameshwar), come to mind: “You made my dreams take flight.” For if there is one thing that this retreat demonstrated it is that we are interconnected in myriad ways, and with each other’s help (never alone), we can practice “dil-ability”. 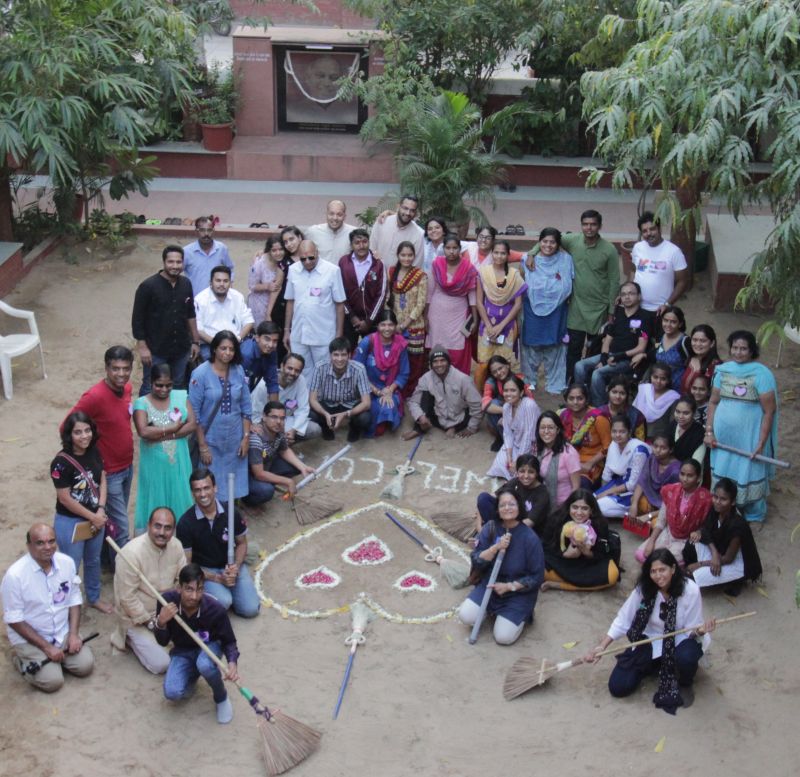