Yup, it's true.  Wall Street Journal published an interview  about an "unconventional path to nonprofit work."  One would figure it would just be a matter of time until Wall Streeters started thinking about gift-economy. :)

Funniest part is that little box on the left that talks about "Salary Range For Your Position".  hahahahah, I'm glad they didn't quote my real answer there. :)

It seems that the article may have been take off the main site, so it's copied below.

By ELIZABETH GARONE
Special to THE WALL STREET JOURNAL

When Nipun Mehta was in high school, he wanted to grow up to be a tennis pro or a Himalayan Yogi. Instead, his path led him to a career as an engineer at Sun Microsystems. But that wasn't meant to be, either. Despite a lucrative paycheck, Mr. Mehta wanted to spend more time at CharityFocus.org, a nonprofit technology organization that he and some friends had founded a few years earlier.

"I loved what I was doing and the people I worked with, but I no longer wanted to do things where the outcomes were tied to a paycheck," he says.

Elizabeth Garone spoke to Mr. Mehta about his unconventional path to nonprofit work. 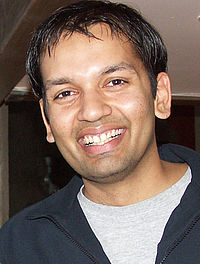 Full name: Nipun Mehta
Age: 32
Hometown: Berkeley, Calif.
Current position: Founder, CharityFocus.org
First job: Paper route with the San Jose Mercury News
Favorite job: Current one
Education: B.S. in Computer Science/Philosophy, Univesity of California at Berkeley
Years in the industry: About 12 in technology, 10 in nonprofit
How I got here in 10 words or less: By coupling IQ with EQ and CQ (compassion quotient).

Q: You started out at Sun Microsystems, but always had a hand in nonprofit work. Why did you finally walk away from your engineering position at Sun?

A: In many ways, I was a product of the 1990s Silicon Valley, dot-com scene. While there was a lot of energy, creativity and enthusiasm around innovation, a lot of it was rooted in a form of self-centered greed. I stayed at Sun Microsystems and over time, I walked away. I loved what I was doing and the people I worked with (but) I wanted to experiment with this idea of giving without any strings attached, doing things just for the love of it.

Q: For a lot of people, ditching a steady paycheck is a daunting prospect. How did you manage it?

A: Initially, this 'How will I pay my rent?' fear creeps in. I figured if I dramatically simplified my life and consulted whenever I needed the money, I could easily buy myself six months of freedom within a year. So I started eating at home instead of fancy restaurants, waiting for the DVDs instead of going to theaters, and so on.

HOW YOU CAN GET THERE, TOO

Best advice: "You won't solve all the problems of the world, but just make sure you aren't a problem for the world to solve," says Mr. Mehta. "Be the change you wish to see."
Skills you need: "Ability to be useful to everyone, using your intellect creatively, and learning design principles from nature," offers Mr. Mehta.
Degrees you should go for: Nothing specific
Where you should start: "Wherever you are. Think about what makes you come alive, and start doing it," says Mr. Mehta. "You'll be surprised at how life organizes itself around your deepest beliefs."
Salary range for your position: Depends on the organization and donations, but nonprofit directors can earn salaries equal to directors in business.

Rather quickly, I saw that many of my dot-com colleagues had this hunger for unconditional service, too, so I started to organize informally. That gave birth to CharityFocus. What went around really did come around for me. For the last six years, I haven't had a formal income, but I'm embedded in a community that (supports) the offerings I provide. It seems like a bit of a novelty, but indigenous cultures and monastic traditions across the world have long been rooted in this gift-economy paradigm.

Q: How has CharityFocus evolved from its founding days?

A: CharityFocus still works at the intersection of volunteerism, gift-economy and technology, but its manifestations have evolved radically. We started off by building Web sites for nonprofits, but today, CharityFocus has grown into an incubator of gift-economy projects ranging from "good news" newsletters to Web portals and social networks to a film-production company to a print magazine to even a local restaurant. Over the years, the scale of our work has shifted dramatically, but we have always held integrity with our three guiding principles -- be volunteer-run, don't fundraise, pay attention to the process. Because our gift-economy modality requires us to not charge, fundraise or advertise, the CharityFocus infrastructure is sustained primarily by "social capital" and that always keeps things interesting.

MORE HOW I GOT HERE

Q: Do you ever miss having a regular job?

A: Not at all. I get to be creative and innovative with technology, I get to be with really inspiring people, I get to work in a way that is in integrity with my deepest values, and I get to open each door and ask, "How can I be of service?" It's much harder than 9-to-5 kind of work. My wife jokes that I need to get my boss to give me weekends off -- but it always leaves me with a smile on my face.

Q: What do you say to people who want to serve but also want to make money?

A: Everyone holds a unique puzzle piece for our collective progress, and it's important to do what we are called to do. Whether you aim to be a billionaire or penniless monk or anywhere in between, everyone can serve because service is simply a commitment to (doing it). The heart of service, though, holds a subtler question about how we make our offerings visible. If you donate money, perhaps you might give in a trust-driven way. If you do innovative research, perhaps you can include the benefit of under-represented constituencies. If you have a lot of influence, perhaps you can inspire others by being an example.