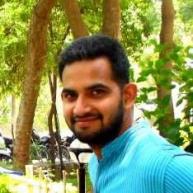 I'm joining Service Space because ... I would like to learn to love selflessly more

A good day to me is when ... There has been both growth and contribution

My hero in life is ...Swami Vivekananda, Mahatma Gandhi

My favorite book is ...From Colombo to Almora, My experiments with truth

One thing I'm grateful for is ... Being led through life:)

Sep 21, 2014, 7 smiles "Look Up" by Gary Turk I have 422 friends, yet I am lonely. I speak to all of them every day, yet none of them really know me. The problem I have sits in the spaces between Looking into their eyes, or at a name on a screen. I took a step back and opened my eyes, I looked around and realised, That this media we call social is anything but When we open our computers and it's our doors we shut All this technology we have, it's just an illusion Community companionship, a sense of inclusion But when you step away from this device of delusion You awaken to see a world of confusion. A world where we're slaves to the technology we mastered Where information gets sold by some rich greedy bastard A world of self interest, self image and self promotion Where we all share our best bits but, leave out the emotion. We're at our most happy with an experience we share, But is ... Read Full Story

Inspirational Line From The Hobbit

Feb 25, 2014, 7 comments, 13 smiles Longtime ServiceSpace friend visited our Awakin Circle in Delhi few months ago.  Reconnecting to that space, he gave us a small, anonymous donation to pay forward.  It turned out that Nidhi had come for the first time that day, and she brought a home-baked cake as her offering for the circle.  As serendipity would have it, it was the birthday of someone else in the circle -- who hadn't received a cake on her b'day for a long time.  It all worked out just perfectly.  Inspired, Nidhi offered that she'll bake a cake for anyone ... informally calling it "Baked with Love".  Every week, she'd do couple cakes in between taking care of her young one.  This last week, she herself got tagged.  She has been so moved that she doesn't think she'll ever be able to open the envelope.  Moreover, she's now keen to host the next Awakin Circle at her house!

Our Family’s Latest Experiment In Inner ...

Feb 05, 2014, 10 smiles Our family’s latest experiment in inner transformation, the 30-day 'in-turnship' got kicked off today at Gandhi Ashram (attached group pic). 5 folks are participating in the 1st edition: Audrey, Gitanjali, Meet, Swara, Trupti:) For the next 30 days, they will stay in Sughad and undertake various practices and acts of service. They will also spend time learning from various mentors. All in an attempt to deepen the transformation within! With love and gratitude, the in-turns:)

Dec 09, 2013, 1 comments, 19 smiles On Sunday, some of us decided to pay forward the love we were feeling within us, by sharing hugs with strangers on the streets (in Gurgaon in the morning and in Delhi in the evening!). We were all a bit skeptical in the beginning, but it turned to be such an amazing experience. :) So many people were left confused by the unconditional love, as they had no base of reference for something like this. ;) In the end, we all felt less afraid and more open to building connections with strangers and trusting their innate goodness. :)

Yes I Am The Change Films

Nov 12, 2013, 1 comments, 8 smiles Last night, about 25 of us gathered to hold a circle at a friend's house. Some very successful entrepreneurs, some people who have dedicated their lives to service, two monks :) and bunch of filmmakers who have been spreading inspiring messages of hope in the country.  Towards the end of the night, we watched a few films from 'Yes I am the Change' contest that attracted incredible short clips from amateur filmmakers ... take a look:

Empathy Of 6-year Olds In A Village In Rajasthan, India

Jul 04, 2013, 4 comments, 8 smiles At our recent Moved By Love retreat, we heard a powerful story from a young woman. Inspired to serve, she left her affluent family in Mumbai to help educate children in a village of Rajasthan, India. She was merely 21 and was asked to begin with staying in a village for a month, with no support! Among the many jarring facts she had to process was how men in the village would get drunk and force the women to have sex. However, she was focused on working with the 1st and 2nd grade kids, who loved her. Then, one fine day, the kids started telling her how she was a terrible teacher and that they didn't want her in the school! Needless to say, she was rather surprised. A bit later, an older student informed her that the men in the village were planning to rape her and her six-year-olds were doing what they could to make her leave the village! She was shifted to another village soon, but imagine six year olds having the empathy to understand something like this, and then thinking of skillful means to express their love! As Gandhiji says: ​"The law of love could be best understood and learned through little children." :)

May 15, 2013, 2 comments, 13 smiles First read of the morning: This beautiful interview of our Brother Pancho, A Citizen of The World. Then, I was taken to another DG article about him! Had tears flowing freely early in the morning itself:) Not sure why! Out of gratitude and inspiration for sure, but something more than that too:) Thank you Pancho! You talk a lot like the being I get to meet sometimes (when I am able to recede within) :)

Mar 22, 2013, 1 comments, 1 smiles Found this talk by Dan Pallotta on 'The Way We Think About Charity is Dead Wrong' useful. (Interestingly, Nipun bhai has also shared a reflection in 2009, on a part of Dan Pallotta's talk concerning organizational overhead.)