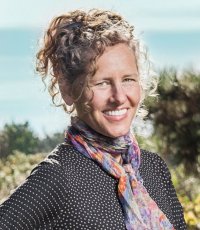 Awakin Calls was delighted to host Dr Deborah Cohan, in conversation with Dr Cynthia Li. Deborah is a lifelong dancer, obstetrician-gynecologist, and teacher of embodied medicine. In 2013, moments before undergoing a double-mastectomy, she and the entire operating room team broke out into dance, filmed by the anesthesiologist for Deborah’s friends and family. The video found its way into the public sphere and has since been viewed 8 million times, continuing to bring forth joy and inspiration!

Deborah oversees births at Zuckerberg San Francisco General Hospital and serves as the medical director of HIVE, caring for pregnant people living with HIV. She teaches embodied medicine at Bolinas, through the Foundation for Embodied Medicine. For Cohan, medicine and movement are deeply interwoven. With an embodied approach that honors the inherent wisdom of our bodies, she has served as a doula for those who are giving birth and those who are dying.

It was pure joy to share space with Deborah, to hear her share about her journey and what she’s learned along the way, and to experience embodiment! The call began with a beautiful guided meditation, with the song "Returning" by Jennifer Berezan pulsing alongside Deborah’s guidance. She invited listeners to “bring in what feels right, and release what doesn’t feel right.”

Here are a few nuggets of wisdom that stood out to me:

Wisdom from babies in the womb: Right now Deborah is reading Rabbi Jill Hammer’s The Jewish Book of Days, and was struck by a line in the book, that "every infant represents a harvest of the past and a seed of the future." From the countless fetuses in the womb Deborah has observed through ultrasound, she’s seen firsthand how they all “dance like no one’s watching.” There are graceful movements, some jerkier movements where they really "get down", and also stillness. “It’s all necessary.” During the birthing process, fetuses find the path of least resistance moving through the birth canal, changing the directionality of their head and body parts, and know exactly how to move and contract in the journey of being born. We all have that innate capacity to find that path of least resistance. If we can close our eyes and go into our bodies, our bodies will always know the answer, notwithstanding our efforts to strategize with the mind.

Wisdom of pregnancy: Pregnant people have innate wisdom. A lot of people worry when they are pregnant, about all that could go wrong, but somehow the body knows how to make another human. Deborah spoke with reverence for this beautiful and miraculous process, specifically regarding the amniotic fluid, and the placenta, “this incredibly wise organ” that removes what is toxic: it "takes in what's nourishing and blocks out almost everything that is not nourishing and that's toxic. And some things are able to cross in. And there's this wisdom of it gets pushed out or diffuses out, everything that's toxic or no longer needed. The carbon dioxide, it just diffuses across. So may we remember that we have this innate wisdom that we received as fetuses." Birthing people will often lose faith in their ability during the experience, saying they “can’t” but they are in fact doing it.

The body knows how to give birth. "And even I see birthing people with epidurals -- so they can't even feel -- and yet somehow their sacrum knows to tuck in just the right way to open up space. The sacrum is a mobile joint. It opens up enough so the fetus slowly, soon to become a baby with birth, is able to find that path of least resistance. I mean there are so many lessons about the body and heart and the mind and trusting this deeper wisdom that we've inherited by watching, witnessing births."

Medical language of “delivery” regarding birth: Deborah clarified how ultimately it is the mother delivering the baby, that her role as the attending physician is to co-create a safe place for the birthing mother and baby. To the question of how many babies she has delivered: “I’ve delivered two, I have two children.”

Liberation, joy, and wisdom through bodily movement: After years of ballet class as a child, Deborah found incredible liberation through gymnastics, the act of running across the gym during a floor routine. She brought that same freedom of movement back to the ballet room, with the realization that “liberation is possible in the body.” When Deborah learned of her cancer diagnosis it was a Monday, the day of her weekly dance class. She went. Deborah lay on the floor crying for most of the class, allowing the music to fill her body, truly feeling the energy of the music enter her body. Most of the class, she felt grief, but then... she felt joy. It didn't make sense, but she allowed it. That spark of joy grew. Deborah found herself then dancing all around the room. It was a joy unlike all other, dancing with her grief. This experience helped guide Deborah in the following days in navigating her cancer treatment.

The dancing video in the OR: Ahead of her surgery, Deborah conceived of the flash mob dance, and filming it as a way to invite community into her healing. She was appreciative that her operating team was supportive of her wishes. A few people she had known previously, but mostly the people working in the operating room that day were strangers to her. But everyone started dancing. (Everyone except the anesthesiologist who was filming on a friend’s phone.) While Deborah was recovering, this friend uploaded the video and chose “public” so not only friends and family could view it, but strangers too. This led her to connect with people from around the world. “I was meant to not only work in the hospital, but also bring this embodiment to others.” During the Awakin Call, we all watched a clip of the video, and in reflection, Deborah noted that, “there’s so much talk about how the body holds trauma, but the body also holds joy!”

Dancing in solitude, and in community: It’s analogous to meditating. There’s something potent and important about meditating in community. There is a role for dancing alone. For some it may feel safer. There’s an electric energy felt when we dance with others, we find how inherently connected we are with each other. In the OR, Deborah was shocked that they were all dancing, that those who didn’t know her prior would honor her healing with participation. There’s a woman from the OR whom she dances directly with at one point; they spoke of this experience afterwards and Deborah learned that, “it wasn’t just my healing, that it was healing for both of us.”

Comparing the birth and death processes: Deborah has bore witness to both birth and death. She finds overall that births are much louder, but the emotional charge is very similar. "For the person who is being born, the fetus, becoming a baby, and for the person dying, it's actually very similar energy in terms of finding that path of least resistance, surrendering into the experience. There is no efforting." “My role feels very similar [...] I’m there to witness, help the passage be as safe and as easeful as possible.” Deborah notes that it’s within these transition moments that the body knows what to do.

Dance as healing, v. medicine. "Dance is healing. Dance is medicine. Our bodies are medicine. That's not what we conventionally are taught is medicine. Medicine is so outside of us; it's a surgery that takes parts away from us, or it's in a pill in a bottle that sits on a counter. My life's journey is navigating through these waters of deep trust in the body's inherent capacity to heal, and also being part of a system that in many ways has a very opposite message. And I'm not the only one. There are many of us insiders who are trying to change how medicine is taught and how medicine is offered to our patients. Sometimes surgery is necessary and sometimes medicine is necessary. What felt most healing to my soul was the dancing, the connecting with community, prayer, meditation. All of those things feel most healing to the innermost core. And yet I did undergo surgery and I also had chemotherapy. I have a foot in each realm. Ideally, they don't separate from each other. But in fact, there are many of us, Cynthia included, who are trying to bring these worlds closer together. So it's all the more integrated."

The paradox of the body's capacity to regenerate, and it's constantly moving toward death. "Our bodies hold this incredible paradox. Our bodies hold newborn energy. It is constantly in a cycle of rebirth, regrowth, regeneration. It also holds the energy of a wise elder. We are all getting older. The moment we are born with our first breath we are ever closer to dying. Every moment we are regenerating. Every moment we are in that still point of non-movement. Every moment we are moving closer to our death. All of those things are true at the same time. So yes, that betrayal, that disappointment -- of our body not functioning and reminding us that we are mortal, that we are dying, we are in the process of dying. And yet also holding that still point, that emptiness, also holding that possibility of regenerating in every moment. It is all true."

How to connect with the body's intuitive wisdom. "I find it easier when I close my eyes. I find intuition in my body. And I find the answers in my body when I'm quiet. Sometimes it's in movement; sometimes it's in stillness. And the connection is when I'm in movement and I bring an intentionality to it. It's not just, "I'm going to throw on music and I feel like exercising," but it's, "I invite the lessons right now." I may even go with a specific question.

Resources and links from Deborah: At Deborah’s invitation, we all stood up and rocked out to "I'm Alive" by Michael Franti.

Much gratitude to Deborah Cohan, for sharing her wisdom and introducing us to the practice of embodiment, to Cynthia Li for expertly guiding the conversation, to all the ServiceSpace volunteers who helped bring everything together, and to you, the listener, for tuning in with your presence and wonder.

May you all find the innate joy that can spring forth from “dancing as if no one is watching.”