Last Sunday we had the opportunity of hosting Awakin Talks with Mekin Maheshwari in conversation with Nipun Mehta & Swara Pandya. Below is a brief summary of the call.

Bowing down to Arun dada in a business retreat. 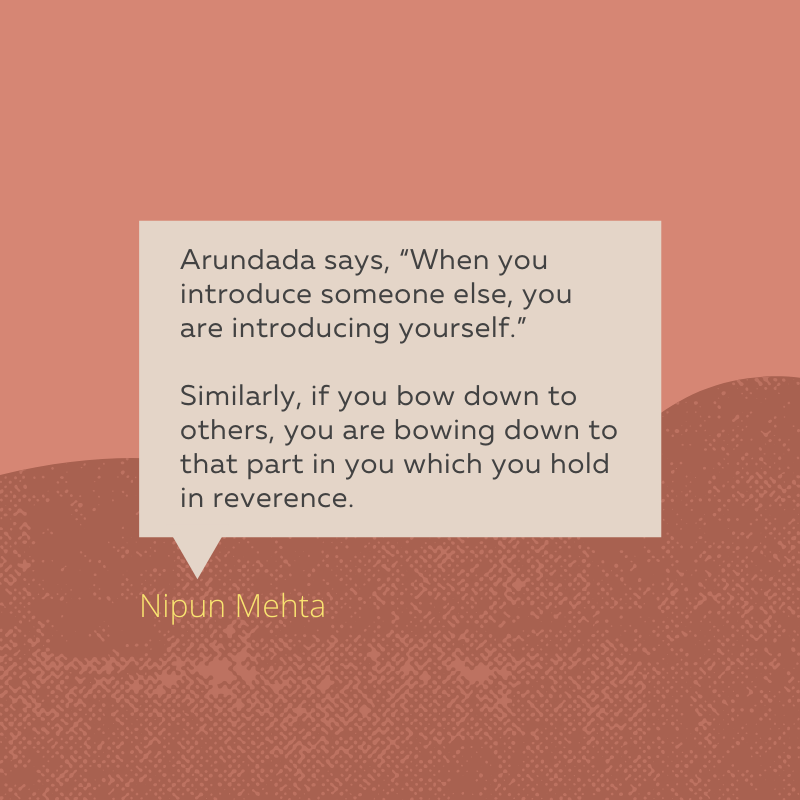 I was so deeply inspired by not his thoughts but also his actions. The simplicity of his answers lot of us put out with convoluted minds and hearts, dishing out questions to him and he was answering them with the same simple filters of how he has lived his life. There was so much truth, integrity and power to what he would say and do.

My question to him was - ‘I have this struggle of building the organization where I want to promote agency, where people do what their inner calling is – but at the same time ...’ And he stopped me right there...

He said, ‘Sansthan mat chalao’( do not run an organization). This meant that the moment there is organizing, it takes away agency. The organization's goals become larger than the individuals --- without finishing my question he addressed it. He knew what the root was. 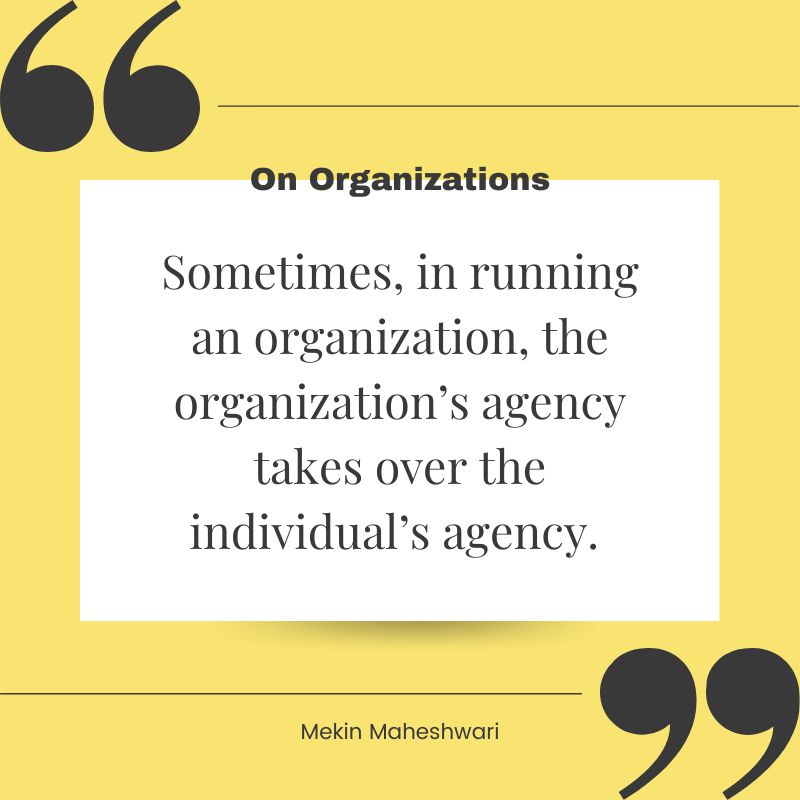 Starting from a place of trust. 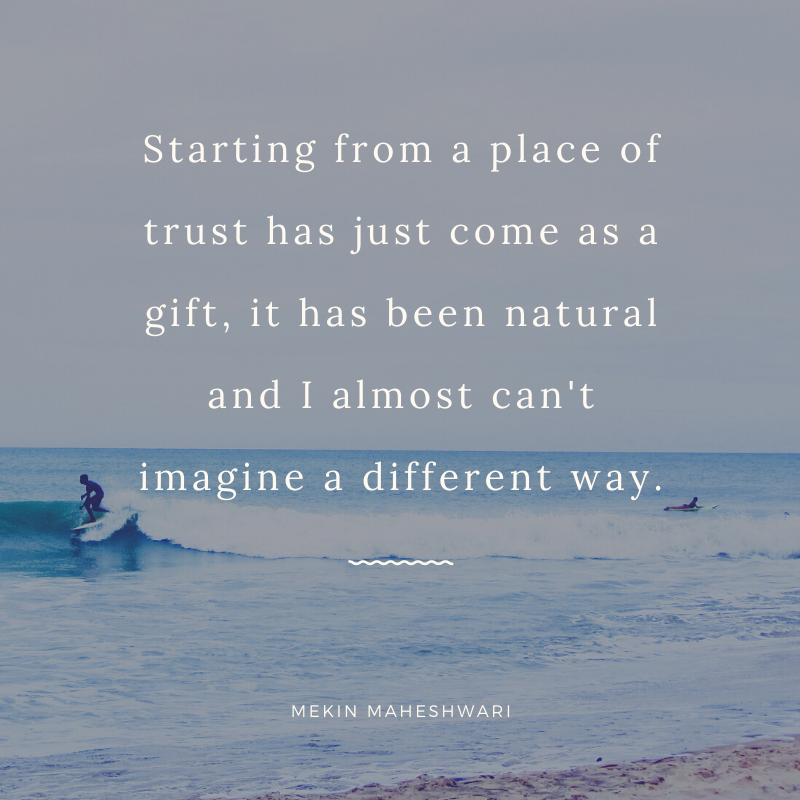 Data kind of bear out that a lot, maybe the analytical side of data. People go with defaults, whatever is the most obvious thing available, that is the path that people choose to work on and that is what drives human behaviour. On the other end, there is user agency and they can choose what to spend time on. This was early learning.

Later I understood that people’s actions were driven more by their fear than by their hopes. Our experiences have led us to where we are and that is what is leading us to what we are doing now. There is a little bit of our own agency, but there is a lot more of our conditions and context. 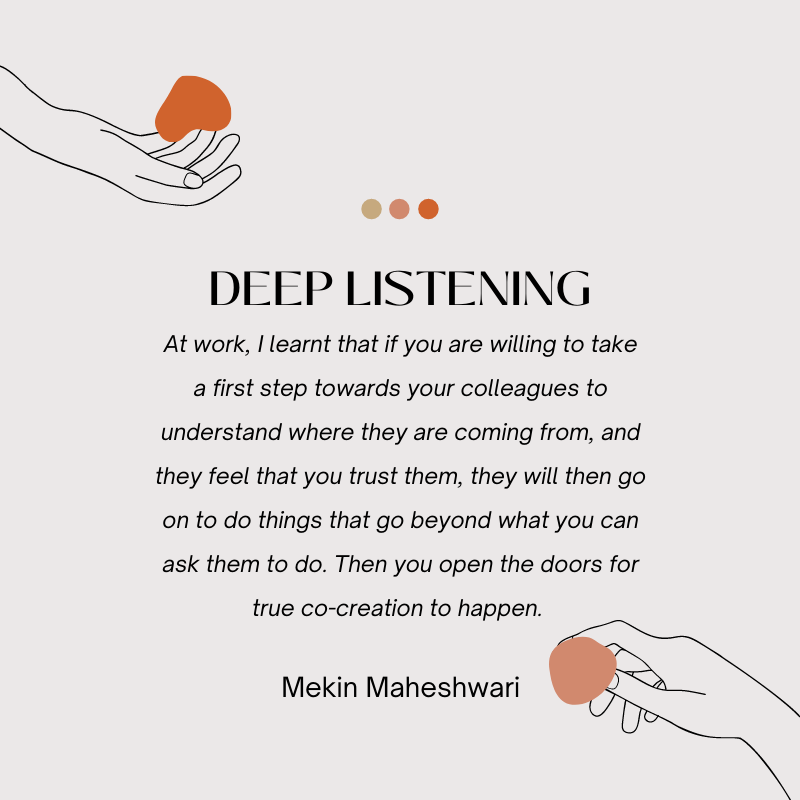 A different kind of leadership

At Udhyam autonomy and agency continues to be a topic of discussion. But there is a long way to go for me, for us, as an organization, as a society to be able to really enable people’s true potential. There is so much potential laying there and it gets shut down by so many activities and so much action that we do.

Decisions that felt right in the moment.

When I backtrack I see that I never got fully enamoured by any one goal. There has been a lot of emergence.

The idea of service was not the intention with which I got into it. I was actually being very selfish and continue to be selfish thinking about what gives me joy. I got joy out of things with people. Thinking about the technology team rather than the technology. I loved to see people succeed. I think it is a very human emotion. I was somewhere able to relate to it and anchor myself to it a lot more. So, then to me, it was like – if people’s joy gives you success, to me education was obvious. My definition of education is ‘how do you enable people to succeed.” 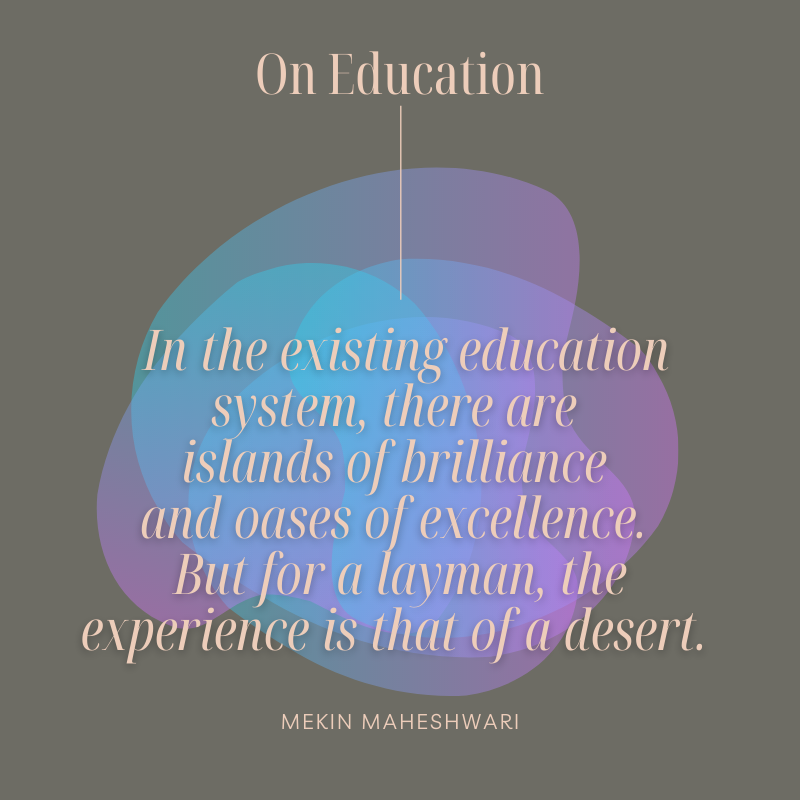 I began with reading the ASER report and any number I would have been asked to guess, I would have been wrong by 70%. So, that is where the decision got made that I am going to be learning and I will not jump in.

I had this impatience about trying to create the largest impact fastest. Few things I realized as I spoke to people in education: Gaps in the field of education Reflections on Open schools 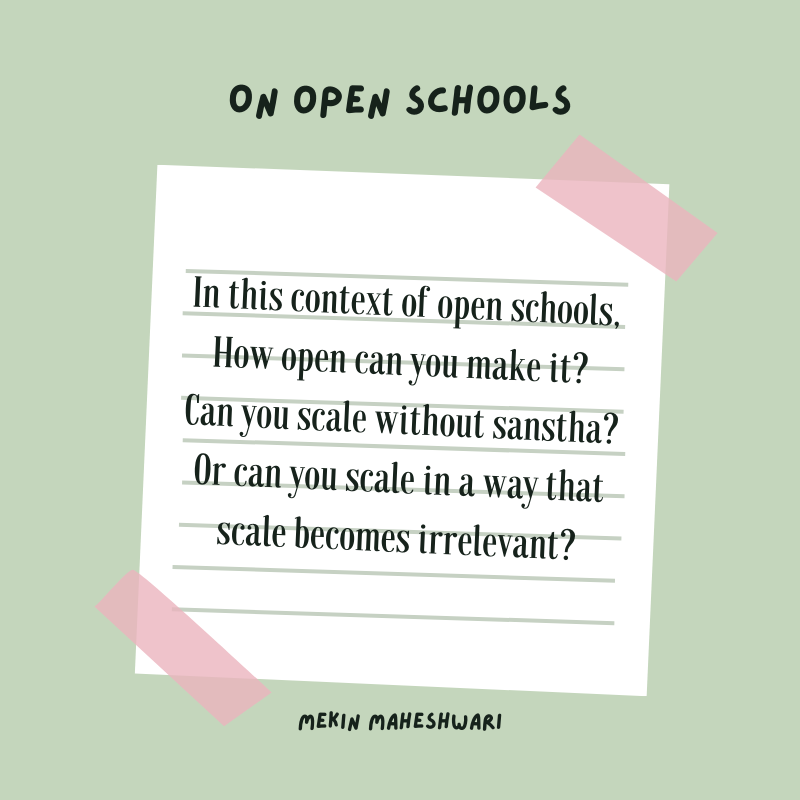 In the technology world, there is often a debate that what is a product and what is the platform. A product is something that has a very controlled and finite user experience. On the platform, the user's agency and choice start playing a role. This co-creation that the user brings in makes the results of the platform far more interesting. If we could up the level of engagement and where learners share what they want the school to be.

Scale in a way where you are not monetizing but truly serving the other persons joy, how do you design for that kind of scale? 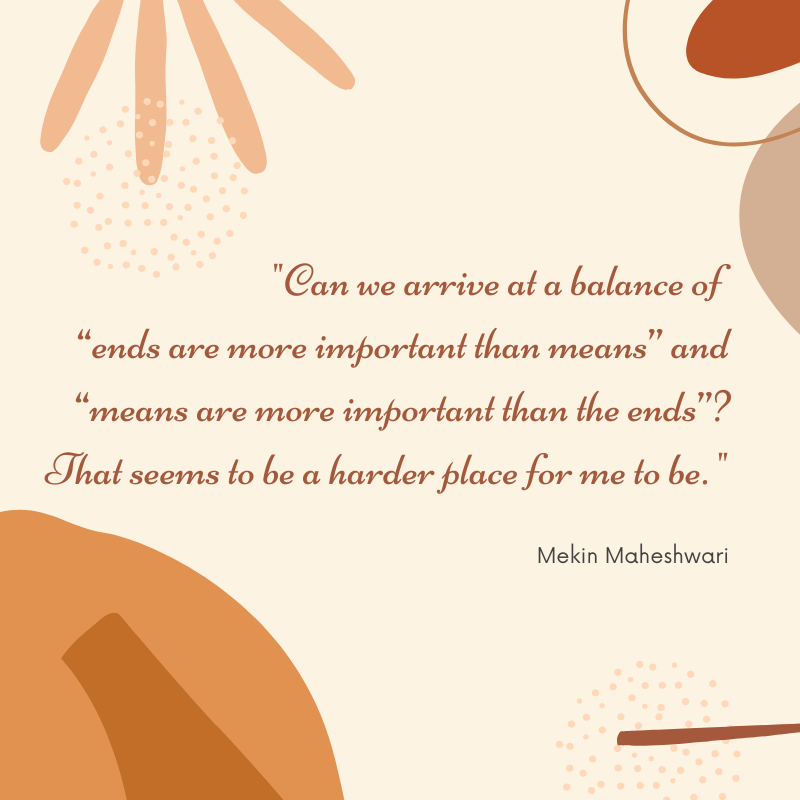 This basically talks to very base level human aspirations, what are they willing to do, wanting to do. If we can figure out and marry the intentions to people wanting to solve hard problems, to have a better life, to have a more fulfilling life along with things that do good to the end but also the means. Gandhi said means are far more important than ends, that I would sacrifice ends over means.

To me it intuitively feels like, can we approach a balance? How do we arrive at an open platform, a large scale platform and yet something that is not doing a disservice to the people who are creating it or its context?

Learning's from generosity and letting go

I do it for my own selfish reason, I get joy out of it. I feel happy about it. What it has taught me is that it is joyous.

I think the moment you think of it as giving, I wonder - would my giving make someone feel smaller, would my giving make the other person weaker, is it good for the short term but not good for the long run? So, a lot of those questions and self-doubt have made dealing with my privilege, my ability to do, my ability to give a struggle. So that is an area I struggle in.

I feel the unknown feels a lot more struggle free for me. I am a huge fan of star trek, just going and exploring with no agenda.

Letting go brings happiness, but that is a radical counter-culture. How do you bring this to schools?

The book The Power Paradox talks about – It is giving that makes you powerful. But as you become more powerful there is something that happens in the human brain and that makes it really hard to then continue to be on that path. So the path that takes you there and then what happens to you as a result …. so what are you becoming in the process.

The story I have told myself is that, I do not want to be this rich powerful guy. I am happy to be that boy who is learning and problem-solving. And that is almost an artificial story that I have probably told myself and the story has kept me to who I am.

So, the answer if I should attempt it and I do not know if I should, is the stories we tell, are the beliefs we build and eventually what we value.

Sep 21: babysitting services dubai on 'HeArt Circle on Forgiveness': "This really is another organic multi-surface...