"What's an experience of devotion that has stayed with you?"

While reflecting on these questions in our Devotion Pod orientation yesterday, two stories came to my mind.

In my primary school years, our science teacher would start her class with a prayer. It felt unusual as none of the other teachers would do that. And as children, some of us resisted and use to make fun of her, but she would continue doing it day after day. Like everyone around me, I would also stand up, fold my hands, and listen to her singing. As a child, I did not realize what was happening, but I distinctly remember tears flowing while listening to some of the words from the prayer. As I grew up, I realized that I was finding strength from those prayers as the meaning unfolded. My teacher seeded as a child was something intangible yet omnipresent, like the goodness around us. To this day, whenever I hear someone offering a prayer, it tenders my heart and helps me reroute my inner compass.

Two years back, during our walking pilgrimage, as we were approaching a nearby village, we saw a man dancing as soon as he saw two of us. It felt bizarre, and I could see my mind judging him. When we reached his shop, he warmly greeted and welcomed us as if we were long-lost friends. He offered us freshly made tea and insisted that we leave after having breakfast that he was preparing for his daily customers. While we were sitting with him, he started sharing the struggles he faced in a metropolitan city where he had migrated with his family for work. After going through severe episodes of stress, he decided to return to his village and do something that would serve him and others. He decided to open a small food joint as he was good with cooking. 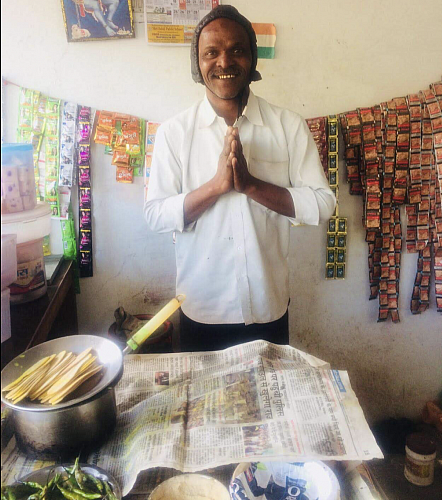 Interestingly, along with a few local customers, he would get thousands of pilgrims walking by his shop each year. He did not earn much money from the daily customers, but his intention to serve made him kingly. We requested him to take some money, but he refused with his folded hands saying, people consider me mad, and I accept that I am mad. Who isn't? He added, when I saw two of you coming, I was dancing out of joy for the opportunity given to me to serve you and all the other pilgrims who would walk after you.

I was reflecting on what devotion means to me, and it felt that all those moments when my heartfelt tender through the goodness of others was devotion.