Both of us drove up together to a holy site, somewhere on the hills of Los Angeles. Except it was Sunday. And this shrine of the revered India mystic, Yogananda, is closed on Sundays.

“If it’s closed, why are we going there?” I asked my friend. “Who knows, maybe it’ll open. Not all gates open by man-made rules.” Okay, I can dig that. We arrived, and sure enough, the giant gate was closed and there was absolutely no human in sight. “Well, we tried,” I stated. With his usual jokster smile, my friend replied with a Zen koan: “Surrender works only after full effort.” He got out of the car. I stayed back, since I wasn’t quite sure how the 50 feet walk between the car and the front gate would change anything.

Lo and behold, right as he beelines for the shuttered gate, a nun comes out of nowhere, appearing to walk in at the same time. I couldn’t believe my eyes! Still, this is a public place (where George Harrison’s funeral was held), and no one is just going to open it up for two random visitors. Yet, much to my jaw-dropping amazement, she opened the place for just the two of us. It defied all logic. The entire 10-acre Lake Shrine, just the two of us. Amidst the sacred ambiance of Yogananda and lush natural beauty, we walked in silence and sat in meditation. It all felt pre-ordained somehow, as if my friend was one divine hoodwink ahead of the rest of us. 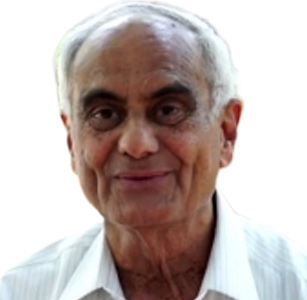 That friend was Popat Savla. He just passed away.

If this were just one episode, I might’ve chalked it off to happenstance. With Popat Uncle, though, it was a regular affair. Always a lover of pithy lines, I can hear him saying: “I don’t believe in miracles. I rely on them.”

Anyone who actually walked in his shoes might’ve felt the same way. He grew up sleeping on the streets of India, studying at night under street lights, becoming the exemplary public school kid who always got scholarships. “Then I married my good luck charm,” he would share with a sheepish smile, about his life-long marriage with Kalpana Aunty. You could tell how much they cared for each other, because right after his sweet comment, he felt very comfortable throwing in a joke: “But, you know about the three rings of marriage? Engagement ring, wedding ring, and suffering.” Not to be outdone, Kalpana Aunty would retort with her crackled laugh, “I agree.”

Life was generous to Popat Uncle, and he was generous back to life. He immigrated to the US as an engineer, dabbled in real estate, and at a specific turning point in his life, in the 90s, he consciously dedicated his life to service. Our paths intersected soon after that.

We met in a rather peculiar way. ServiceSpace had just started, and we were interviewing nonprofits who wanted us to build them a website. Popat Uncle was a volunteer with one of those nonprofits. As volunteers accepted and completed the project, Popat Uncle intuitively felt that something was different here. At that time, we hardly had any history, and yet, he felt an inexplicable affinity with our radical guiding principles -- particularly of operating without any fundraising. Then, in 2001, a major earthquake hit India, epicentered in Kutch, where he was from. We ended up speaking at 1AM, before his 4AM flight to ground zero, to brainstorm ideas for earthquake relief. The website we created ended up going quite viral, attracting millions of visitors.

Yet, the projects seemed to be a side-show in the face of our deepening friendship. As a twenty-something at the time, I spoke to him about my ambivalence of quitting my job and jumping head-first into service. To all my insecurities, he would be an unflinching votary of unconditional trust in life. “Don’t listen to the elders. You can see where we have ended up,” he would say. “Go on and chart a new path. Listen to your heart.”

An invisible halo of fearlessness always swirled around Popat Uncle. Just like opening that gate at Lake Shrine, he had an inexplicable audacity in knowing that nature will adjust its sails to the winds of a selfless intent.

Everyone wanted him on his team. Because of his fearlessness, nonprofits would often ask him to approach big-name funders and celebrities. It’s not that he had the aura of a slick salesman. Hardly so. His shtick was far, far simpler: he would just walk to the front door, even if it was the country’s prime minister or the richest man in India, and trust that the gate would open. For him, it somehow did open. Yet, the flavor of his courage wasn’t of the “I have nothing to lose” variety, but rather “I have nothing to gain.” That alchemically elevated others into their higher instinct.

His front-line efforts, deep love of the common man, and utter trust in life, allowed many contagions of compassion to form around him. Many dozens of grassroot nonprofits would cite him as their favorite ambassador. Post 2001 earthquake, a US senator gave $20M to a coalition that Popat Uncle had pioneered. Yet for him, it was a daily affair to serve the sacred in the mundane. He rarely recounted his indirect impact on countless lives. Instead, he told stories like this:

Together with Kalpana Aunty, they have supported thousands of people in small ways and big. When you get Popat Uncle in his engineering mindset, he would even be prone to precise algorithms: “We have always tried to serve those reaching for the divine: monastics, artists, and nonprofits.” For instance, legends of Indian classical music -- Ravi Shankar, Hari Prasad Chaurasia, Zakir Hussain -- have played (and stayed!) in their house. Such performers don’t normally do house concerts, but they would often deliver their most inspired performances in that home. “Something about the ambiance,” each of them would say. Their home was host to so many events that almost every group coined their own nickname. Ironically, it is on Lotus Avenue. 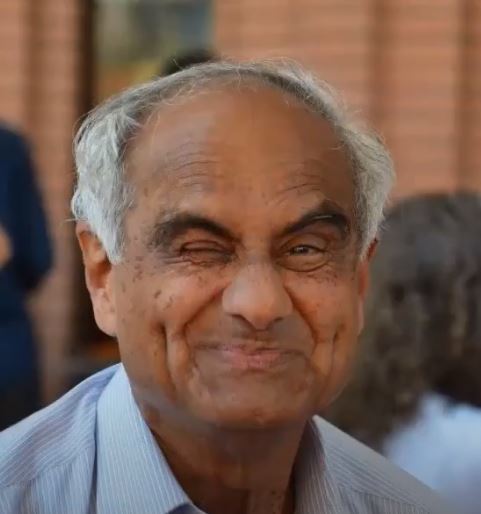 For ServiceSpace, especially, that home was always open. Several times over the years, maybe 10-15 of us would head over and put out sleeping bags all over their living room, organize bathroom schedules, and happily turn their weekend plans into cooking frenzies. Practically every time I would be in the area, we would host a spontaneous Awakin Circle with 30-50 local friends. Last time I was there, in 2019, it just so happened to be Kalpana Aunty’s birthday. On some trips when that wasn’t feasible, I would still show up at 11PM at night, and depart at 7AM -- because we all felt like family. Our midnight conversations would typically end with Popat Uncle eventually retiring with some quip like, “You know that sleeping on the floor is the best way to connect with Mother Earth.” (Indeed, he would often sleep on the floor, even in the later parts of his life.)

Apart from those visits, we didn’t talk often. Yet, he frequently reiterated that our connection was cosmic. Perhaps it was, because whether it was my wedding or the turning points in his spiritual journey, our lives invariably ended up intersecting at the most opportune moments.

I most admired Popat Uncle’s capacity to be a kingly giver. Although he was so deeply attuned to the plight of the world, he didn’t give out of sympathy. Like a king, he gave because it was in his nature to give. Once, I got an unexpected call from him: “I was at this event, and at the end, they were raising some money around a 30-year vision they had. I was just silently sitting, when I saw a banner with today’s date. I realized it was my mother’s birthday. I remembered how she had sold her only piece of jewelry so I could pay the application fee for a college scholarship. Everything I am today is because of her.” In her honor, he quietly went up, wrote the biggest donation check of his life, and walked out.

It wasn’t calculated, nor was it for creating external impact. An overflow of gratitude, where the branch tips paid homage to its roots and the river started blending into the sea. “My mother taught me that what you can’t give away was never yours to begin with,” he told me that day. Only a couple people ever knew about his anonymous act.

When Popat Uncle came to one of our retreats in 2018, he ended up on a small cot in a dorm. Unfortunately, so did many mosquitoes. In the morning, I saw his face full of mosquito bites. To my petrified look, particularly as a host, he laughed and simply said, “I was practicing generosity last night. I offered my blood to the mosquitoes.” That was the last he ever said anything of it.

That was Popat Uncle. A kingly giver who lived fearlessly in the womb of nature’s love.

Before we met, Popat Uncle and Kalpana Aunty got into a disastrous car accident when a drunk driver hit them. They had to be flown into a hospital, and it was unclear if they would even survive. It was in that helicopter that he promised himself, “If I live, I’ll spend my remaining days in service.” Rather miraculously, they both got away with just a small surgery. And he stuck to his word. When they returned home from the hospital and checked their mail, they saw an inconspicuous postcard from a hermit they had hosted many moons ago. It mysteriously read: “God has given you a second chance.”

God gave all of us a second chance too. 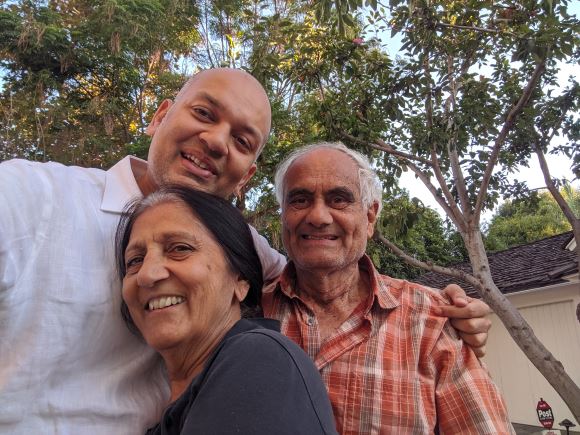 Popat Uncle, thank you. You have blessed so many of us, since our very first encounter. I’ll miss our above-speed-limit car rides, shuttling from one event to another listening to Osho lectures. I’ll remember your Mulla Nussrudin stories. Your deadpan jokes. How you still referred to ServiceSpace as “CharityFocus”. Your loving presence at Jaina events, when you’d be sitting right in the front row unconditionally cheering me on. The sparkle in your eyes, when you spoke of the generosity of those who have the least. Classical music that would spontaneously turn on. How you’d always stuff some random offering in my pocket, like my grandmother, every time we parted ways -- including the last time we met. Your indefatigable conviction in the good. Your humble love affair with life.

May your incredible virtues find a stronger home in my heart, and may I keep nurturing the symphony of vibrations that you have revealed.

Even in your passing, you gifted us a reminder of this parable: a Salt Doll gingerly steps to the shore, inquiring about the nature of the sea. The sea invites her to touch it. As she gingerly takes a step forward, she repeats: "But who are you?" Now, losing parts of herself, she continues forwards, and in the end, exclaims: “It is I!”

Smiles From 45 Members Login to Add a Smile

A War Orphan Who Became A Ballerina Michaela DePrince is "the ballerina who flies." Orphaned at age three in war-torn Sierra Leone, ... Read more