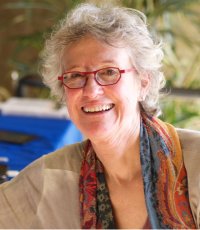 Last Saturday, we had the privilege of hosting Awakin Call with Arlie Hochschild.

“Everyone has a deep story,” says Arlie Hochschild. “Our job is to respect and try to understand these stories.” She is one of the most distinguished sociologists of our time. Considered the founder of the “sociology of emotion,” she is professor emerita at UC Berkeley and author of 10 paradigm-shifting books. Her most recent, a New York Times bestseller and finalist for the National Book Award, Strangers in Their Own Land: Anger and Mourning on the American Right, had her immersed in southwest Louisiana. She was determined to get out of her comfort zone and climb “an empathy wall” to be curious about the experiences and viewpoints of people she knew she would have differences with. In the end, she became friends with many she interviewed. “Caring,” she insists, “is not the same as capitulating. The relationships in Louisiana enlarged me as a human being.”

Below are some of the nuggets from the call that stood out for me (excerpts from the transcript follow)... Lots of gratitude to all the behind-the-scenes volunteers that made this call happen!