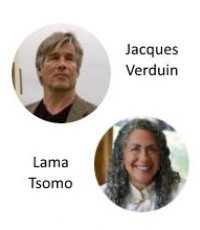 This Wednesday, we had the privilege of hosting an Awakin Call with Jacques Verduin & Lama Tsomo.

It was a timely conversation exploring insights, tools and practices to support ourselves and our communities in these times. For many of us, the pandemic has constrained our movements and confined our interactions -- turning our homes into seeming prisons. Many regions are also plagued with fires, hurricanes and other circumstances that force people into even greater lockdown in homes that may no longer feel safe. In conversation with Jacques Verduin, an expert in prison rehabilitation and Founding Director and Minister of Transformation of Insight-Out as well as the Founder of its GRIP (Guiding Rage into Power) Program, and Lama Tsomo, a Tibetan Buddhist lama, we’ll explore questions such as: How do we remain sane in lockdown? How can we remain lifted up when everything around us seems to push us down? How does this season actually serve us? How do we regain our freedom and liberation?

Below are some of the nuggets from the call that stood out for me.  Some highlights from the transcript are further below ... Highlights from the Transcript
Lots of gratitude to all the behind-the-scenes volunteers that made this call happen!