One positive side-effect of the Corona Virus has long-time “enemies” cooperating with one another. Hopefully, the start of ongoing healing, in more ways than one. 🙏

Excerpts from this article in today’s NY Times: “In Odd Turn With Israel, Gazans Get Economic Adrenaline Shot from Virus - The New York Times”

😷”With demand for masks and protective gear soaring worldwide, Gaza garment factories have been flooded with new orders since early March by merchants from — of all places — Israel, ordinarily seen by much of Gaza’s Palestinian population as the enemy.”

“Several tailors interviewed said they had no compunctions making masks to protect people in Israel, which has fought three bloody wars with militant groups in Gaza over the past 12 years, as well as several smaller battles.”

❤️“At the end of the day, we are all humans,” said Raed Dahman, 42, at Hassanco in Gaza City. “We should try to make sure everyone is safe, without exceptions.”❤️

🎥 PHOTO: A shop in Gaza City. About a dozen factories have begun turning out masks and protective wear, several of them hiring new employees.Credit...Mahmud Hams/Agence France-Presse — Getty Images 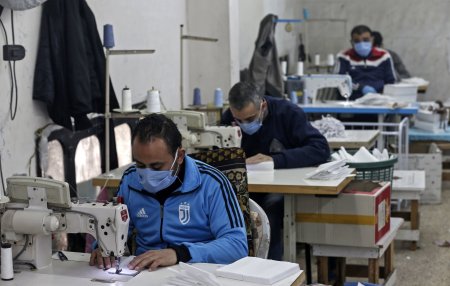