2020 will certainly be a year to remember.

In our ecosystem of aspiring generosity entrepreneurs, it also marks our fifth year of Laddership Circles.

Couple weeks back, 30 project initiators and 14 volunteers across 11 countries have circled up for 3 more rounds of these virtual circles. Each of us signed up to give 7-10 hours weekly to the six-week learning journey through the hands, head, and heart. With hands, we engage daily practices in our lives; with head, we share reflections on uncommon articles and case studies; with heart, we explore the intersection of inner change and outer service. Through it all, we learn from and inspire each other, tuning into patterns of positive deviance that our collective consciousness is surfacing.

From that space, it's been remarkable to witness everyone's budding intentions converge around questions of: How do we design for inner transformation? Can we innovate in a gift economy? What would a "generosity entrepreneur" do? How do we lead with love?

In today's pandemic world, such questions seem more relevant than ever. 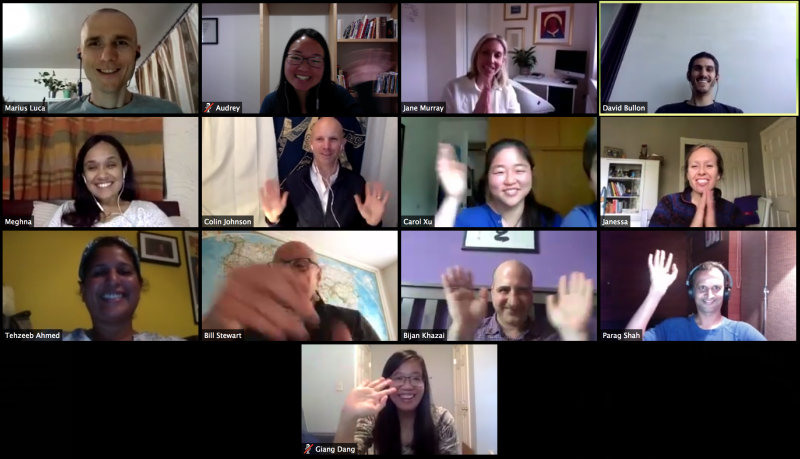 Before we began, 14 of us circled up on a volunteer orientation, to survey the social field that was coming together. So many beautiful reflections surfaced, as everyone reflected on insights from previous circles, and readied to hold space for the coming six weeks together. The theme of leading with gentleness wove a steady thread throughout the conversation.

Colin described, "With emergence, things happen when they're ready. You can't turn up the incubator for eggs to hatch sooner than they're destined to hatch. It's through gentleness that we allow emergence to bake as it has to do." Jane put it, "The gentleness is built into the DNA of the ecosystem -- that is expressed really fully in Laddership -- is through reverence. We are invited to be treated and treat others with that reverence." Another volunteer described the power of peer learning process -- where there's no teacher or teachings, but just everyday people trying to grow in service: "We are all imperfect people... but we all keep growing into new capacities." On that note, longtime anchor, Meghna, recalled a story from a previous circle, of the "extra"ordinary act of simply looking to be of help, and then noted how the values and language have so seamlessly permeated into daily conversations in her family: "My daughter was six in my first Laddership Circle. Now she's nine. Recently, someone told her, "Your mom's a good leader." She said, "No, no, no, she's a good ladder!" Somewhere between six and nine, this laddership has infused our family :)"

Our India laddership visionary, Parag, recalled the quality of noble friendship that surfaces through serving together, and Bijan poetically offered up his intention, that seemed to mirror our collective one:


In English, there's a phrase "To steal someone's thunder."

In Persian, there's poem by Rumi, which translates to: "The flower grows by the rain that flows on it. Not the thunder."

In leading with gentleness, rather than show up to be insightful, you're just holding space.


With that, we were ready to bring on the rain! :) 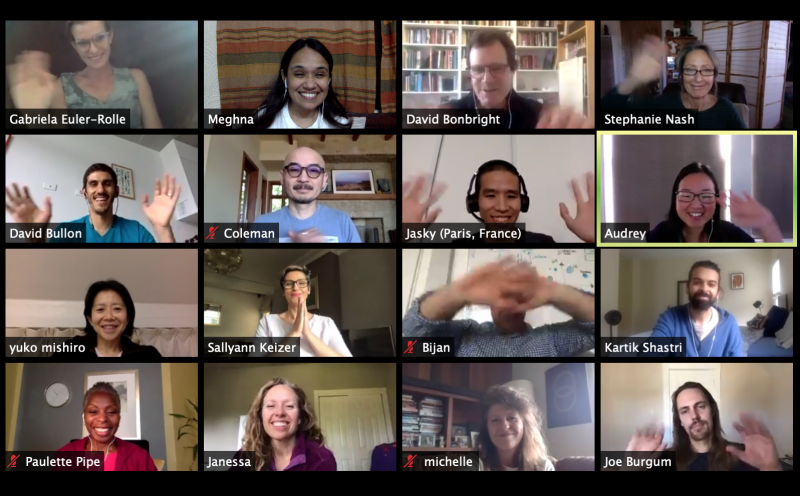 First up, was our Gandhi 3.0 Laddership Circle, a follow-up to the retreat in January. On the coattails of the palpable convergence, the circle began with its ground running. Everyone coming together was asking how to serve a paradigm where love leads. A journalist noted how media shines light on sensationalism of celebrities -- but what about the shining virtues of unsung souls? A "Humble Heroes" series was born. When Sallyann in London launched her labor-of-love nonprofit couple weeks back, she described: "I have decided to get started this week! But to go beyond a few weeks, I potentially require investment. However, what I am most interested in, and so cannot wait to get going on, is exploring other forms of capital available and other approaches to reaching and helping the children."

Everyone is leading different projects, yet living into the question: "It's not what we do, but who we become by what we do."

Joe, a community leader and entrepreneur in Fargo, described in his project description, "Ever since returning from Gandhi 3.0, I have become less interested in what people are working on, and more interested in how people are doing." A systems thinker, and nonprofit leader transparently wrote: "I have been doing such projects since 1989 and frankly I'm tired of my projects. I would much rather help with others' projects right now." Last week, each of us took on a practice to "listen without an agenda". Yuko posted an invitation for anyone who wanted to share their story -- almost two dozen people responded, and she said yes to the first 8! (With a waitlist of 11 more, that she might still converse with!) After full days homeschooling her three kids due to the pandemic, she was up past midnight, listening to the experiences of acquaintances in her community. From it all, Yuko keenly observed, "One deep talk in the heart can be much more stronger than simply working together for a long time." 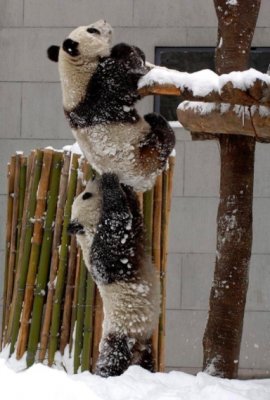 As we dive into the circle, many of us find ourselves acclimating to concepts like "emergence, and "holding space" -- and how they humbly show up in our lives through lived experience. Sallyann noted that she's started a "glossary" in the back of her journal. We even had to dust off our memories to recall where the "laddership" word itself was coined. :) While so much of the definitions are living and yet to be written, Jasky managed to appease our inquisitive minds with this striking photo of pandas embodying how to 'ladder' one another. :)

The following week, two more circles spun into motion. Monday finds us in a classic mix of experiential education visionaries, community builders, peacebuilders, systems thinkers, human resource innovators, and beyond. Jane noted: "I was struck by the energy and enthusiasm of the group. Each circle is so different and it takes a while to feel into its self-organisation but I feel that there are a lot of synergies and shared interests, although many different paths." We were also moved by the quality of questions that are surfacing and being held and lived into across the collective. Marius recorded a series of questions fellows surfaced his orientation circle: "We all have wisdom in ourselves, how can wisdom grow?" "How can we go back to that potential in ourselves that we’ve covered up for so long? I want to listen more." "I feel deeply thrown into the not knowing; sometimes this is rich and uplifting and there are times when I’m absolutely terrified. How can I lean into more service?"

In a conversation on the stories we live in, almost everyone independently noted the narratives of money that have dominated our worldviews: "Time is money." "You get what you pay for; nothing is free. If it's too good to be true, it probably is." "Money don't come easily." "Financial security is something to strive for." "More money results in happier life." How do we expand our framing of value creation? In her project description, Hollister wrote, "I'd like to shift out of any stale lack mindset that lingers in my thought and fully immerse myself in abundance mindset." In designing a nonprofit initiative, another fellow wondered how to think beyond traditional models: "How can we resource initiatives in other ways?" Julia, in experimenting with incorporating kindness capital as a form of payment for audio content in her and Jane's project, points out that different forms of capital engage different dimensions of value, which may not be interchangeable: "Since the Covid-19 outbreak, we are more sure of the value of kindness than ever before but we are also starting to think that equating kindness and money may be devaluing it somehow. We are undergoing an evolution in the project, but are just as sure as ever that it is important!" 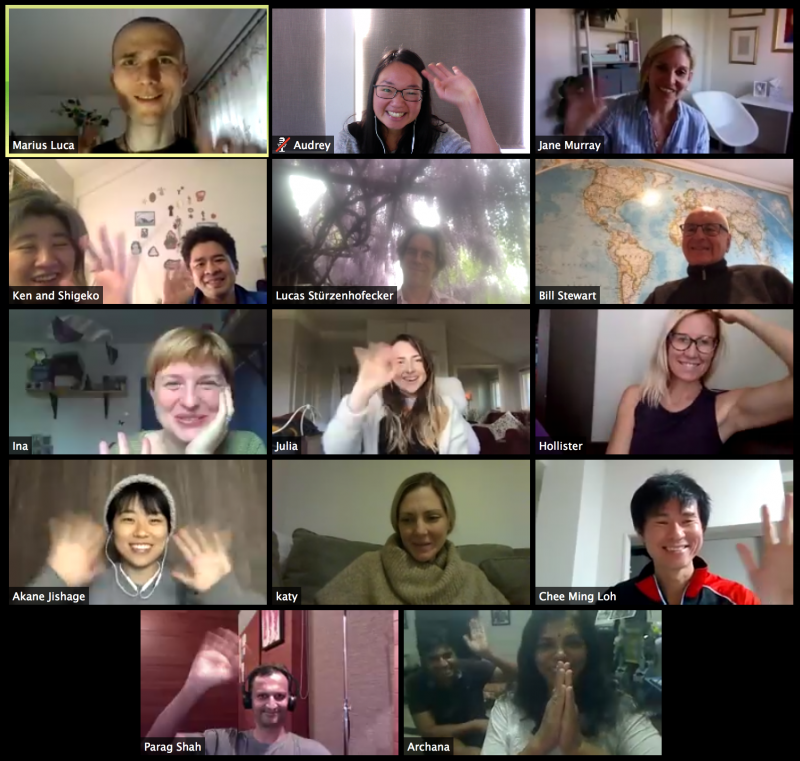 A few days later, Thursday's circle converged a spirited crew -- from educators to psychotherapists, community builders in our "French Gang" to engineers, doctors, an immigration lawyer, philanthropist and others who defy occupational categories. From the get-go, everybody tuned in. "How did we get to a space of so much familiarity just on the first call?" few folks wondered.

Thematically, everyone was living into questions of how to lead with greater love. How to even go about designing projects fueled by building blocks that can't be quantified? What's the equivalent of a 'key performance indicator' for compassion? :) Alan in California observed, "When you quantify everything into models, it makes invisible the things that cannot be measured... What would it mean if the 'how' of my work mattered just as much, if not more, than the 'what'?" Afsha in Los Angeles quoted Nimo (: "There's a line in Nimo's song, Graduation: 'Be wary of the impact you wanna make; instead make sure you are impacted each day.'" In that spirit, Brenda in Barcelona described her shift from willing her vision to surrendering to a collective unfolding. After launching her dream Montessori School and becoming a first-time mom in the same year, she found herself in over her head. Inevitably, school enrollment steadily declined. At the end of her rope, and humbled, she decided to close the school. Next day, a teacher came by insisting that she couldn't shut down a space that held so much potential. Four more friends piled on, "with no money, just love." The school was back up and running -- this time, fueled by volunteers. "How do I support and empower such intentions? What kind of system can nurture that goodwill?" she wondered. 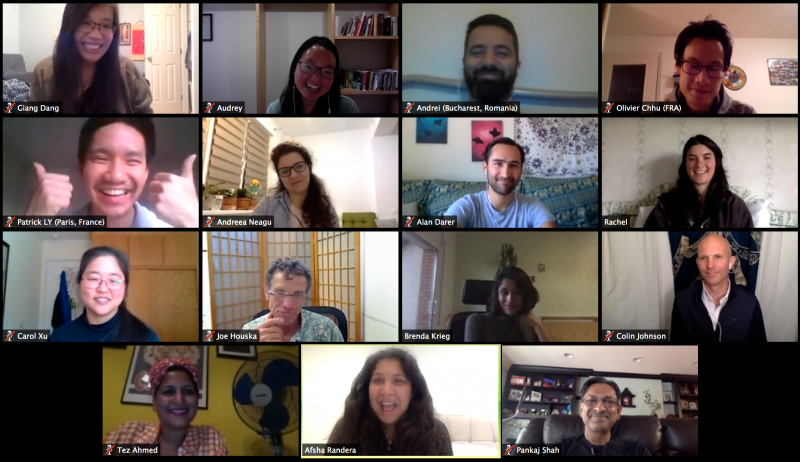 As we dive into our second week this week, more nuanced questions of design and transformation are rising to the surface. A few from the most recent call: 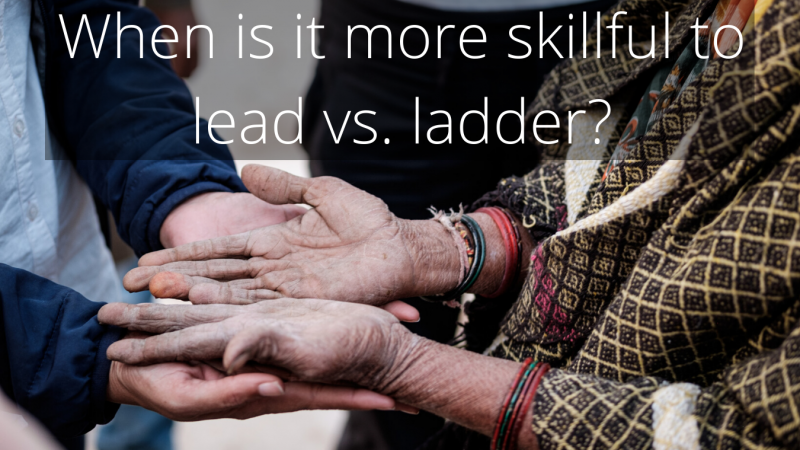 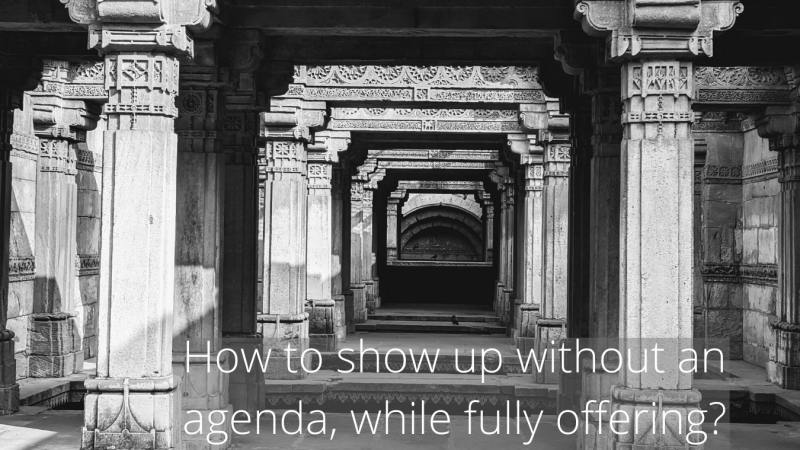 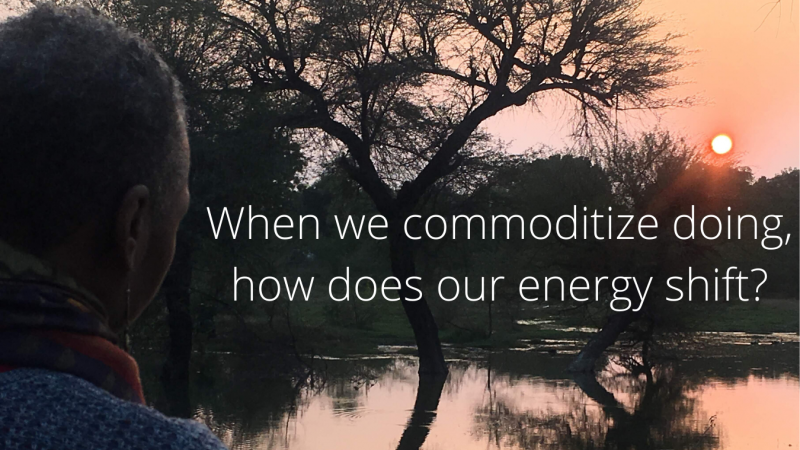 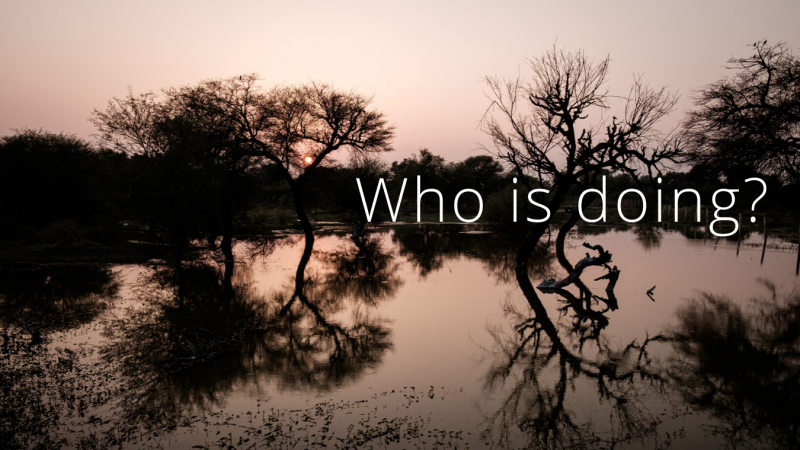 Earlier this week, Archana reflected, "Our work is defined by the intentions behind it." As the seed is, so the bloom will be. Even with all of us under lockdown (and a couple participants recovering from the virus themselves) -- around the world, it's been inspiring to witness how the intentions of volunteers and participants alike are fueling a regenerative field of possibility across this circle. Janessa swaps morning childcare duties with her husband for our call, and as she anchors the circle of sharing, we all smile when her toddler calls out in the background. While running two organizations, fulfilling pandemic homeschooling and parenting commitments, and then staying up in wee hours to complete his work, Bijan resoundingly writes, "I feel so energized after our circle or reading a nugget-filled reflection on someone’s feed or when simply feeling connected to the greater-than-the-sum-of-it’s-parts energy of the circle during an exercise or a reading :-) this is the alchemy!"

And underneath the alchemy of the circle is a bottomless network of roots, composed of many moments and micro-moments behind each journey that landed up here -- each of which adds to the chemistry of the collective. Last week, 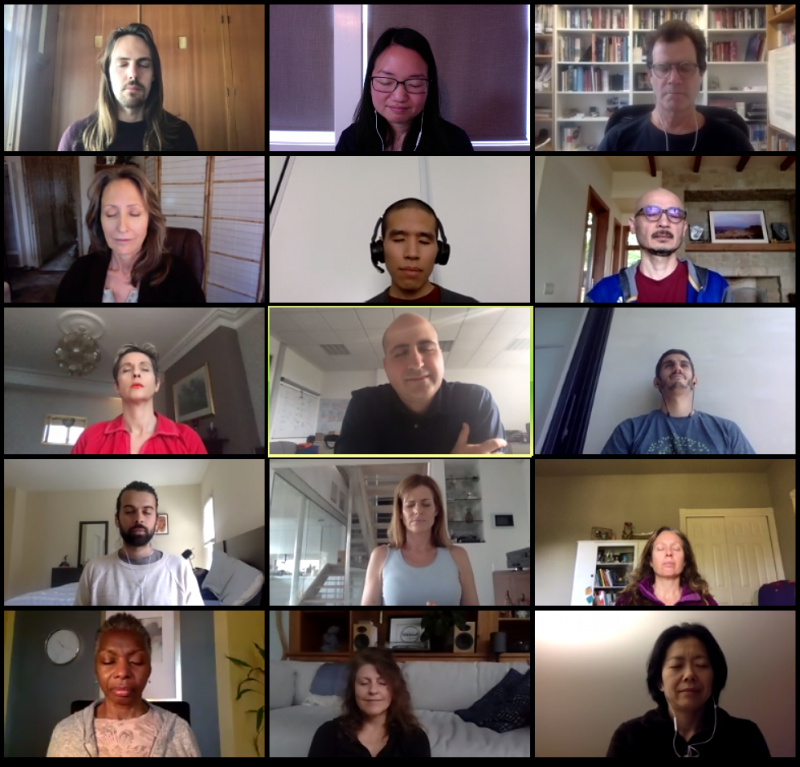 Meghna's dad passed away unexpectedly from a longtime health condition, just a few hours before our call. Upon receiving the news, we all held an extra minute of silence, sending our hearts out to her family, and wherever they needed to go. In these visibly precarious times, where the foundations upon which we've all been going about our lives have dissolved in a short period, there was an inkling of something eternal in that silence -- and in the space between each of us around our circles. From our virtual sphere, to our visceral environments, to the collective sea of consciousness of which we are simultaneously an infinitesimal drop and the infinite whole -- we can't predict what will surface in our remaining month together, but what an honor to converge in such a way. May we have the eyes and ears and heart to tune into what emergence holds in store. :)

Smiles From 37 Members Login to Add a Smile

Sep 22: SkullCrusher on 'Yoo-Mi Lee: ServiceSpace Coordinator Extraordinaire': "I believe there are many more pleasurable...

Sep 21: Swara on 'Welcoming Anha for Summer Internship!': "Anha, what an application. Probably I would...