My week-long Gandhi 3.0 Immersion-Retreat experience in Gujarat, Ahmedabad, India has opened windows, doors and even roofs for me to experience a concrete breaking down of “barriers”. The participants were from a spectrum of people – from those who own private jets to those who choose not to have a bank account; from those who helped craft the constitutions of Afghanistan & Iran to those who plant earth flags along borders to advocate for a world without borders; from those who represent various faith traditions to those who do not have any religion. 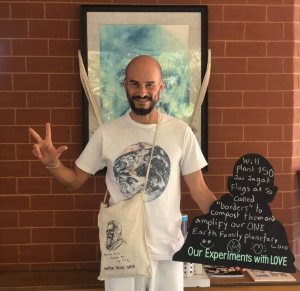 We were along this spectrum yet felt the same unity, sharing our ONENESS with one another. This coming together claims to be agenda-less. It pursues no target objective nor want for an output. It was just open to emergence. To whatever will come out of the gathering and the experience of connecting people heart to heart. They leave the ripple effect to wherever and however it goes. This I find very freeing.

There are so many things to speak about the experience but I’d like to highlight a few points which left a strong impression on me. I believe this is part of the process of my discovering our Asian soul. Moreover, I’d like to note that the gathering was not on Gandhi (1869-1948) the physical man but the values and principles that one could learn from a “prophet” of our time.

From the conversations and exchanges we had in the groups, I took away the strong common call to work on one’s inner change (of course with the grace of the Holy Spirit) in order to affect or impact the outer world. 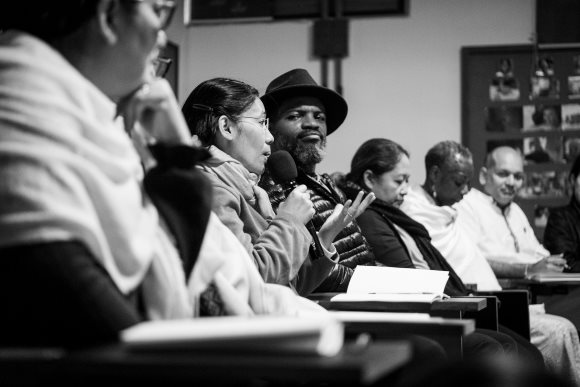 To illustrate a bit about the power of “inner work first” was when a mother came to ask for the help of Gandhi to tell her son who became obsessed with sweets to stop the bad habit, Gandhi asked the child’s mother to come back after two weeks. Perplexed, she obliged and came back after two weeks with the boy. Gently, Gandhi told him, “Boy, stop eating too much sweets. It’s not good for your health.” The boy nodded and promised he would do his best to cut back on eating sweets. Curious, the mother asked Gandhi why he needed two weeks before telling the boy. He smiled and said, “Two weeks ago, I myself had an obsession with sweets. I had to practice cutting back on sugar myself.” I find that this sends a strong message on the power of our witness.

It seems to me that the above is quite simple and self-explanatory with the graph which best illustrates a comparison between how the world sees the order of “change” and how Gandhi starts with the self and says “You must be the change you wish to see in the world.” As Marie Eugenie would often speak about entering into a path of personal transformation as the first step to social transformation.

In a world where almost everything is tagged with a price or a cost, it was worth asking the question, what is the future of relationships? Nipun Mehta (founder of servicespace.org) shared about the 3 types of Reciprocity.

Direct Reciprocity is like loose ties where relationships are transactional – “You do good to me and I’ll do good to you.” Indirect Reciprocity is about creating networks so that “One day, we’ll be able to help one another.” And Infinite Reciprocity where relationships are value based or based on principles where we create noble ties – You do good to others in generosity of spirit and you do not care if it comes back to you. It is with the belief that whoever benefits from the ripple effect of one’s goodwill is part of a bigger family. Gandhi emphasizes the certainly of the power of love when he said, “The law of love will work, just as the law of gravitation will work.” Nipun calls this the law of flow – when boundaries start dissolving and we connect heart to heart. This was most palpable in the whole experience of the retreat – no more boundaries, just Jai Jagat! (One Earth family) Below is an illustration on how to shift our relationships so that it facilitates transformation.

On the Science of Compassion

It’s great to be among amazing people who in their respective fields are doing their part to contribute to society. Among us was Dacher Keltner, a social psychologist & scientist at University of California, Berkeley. He is the founder of greatergood.berkeley.edu. He shared about power and compassion: "What we're finding is power diminishes all varieties of empathy" he said, which means power and privilege deactivates the physiology of kindness and compassion. This, I well noted as we are forming students from families of privilege and power. The more I became so convinced of exposures and immersions as non-negotiables in our education process.

In a particular study, they were coding “touch” (fist bump, chest bumps, hugs, etc) of basketball teams. Their finding showed that the more the team members touch, the better they performed. Something to note in creating a school climate where we facilitate connections and relationships among students and teachers. Another study revealed that as one receives an act of kindness or generosity, they pass this on by 17% more, then 7% from the next one who receives it. Can you imagine a world where we do experiments of kindness and compassion; imagine the ripple effect it will cover. This gave me an idea on how to “operationalize” making the reign of God more visible wherever we are.

It was a gratuitous gift I received; an overwhelming experience of receiving literally so much for all we shouldered was our plane fare and they took care of everything else. How do I begin to proceed from here? At present I continue to do “heartstorming” with teams under my care noting one key take-away quote I carry in my heart; the one that says, “It is not what you do but how you become in the process.” 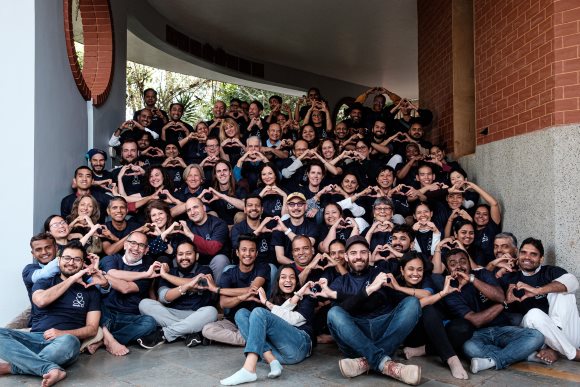 “In a gentle way, you can shake the world.” - Gandhi

Smiles From 32 Members Login to Add a Smile